Today Show Coverage of ECMWF Forecasts and other Sandy Links

Visit NBCNews.com for breaking news, world news, and news about the economy

Yesterday a film crew came and interviewed scientists from the European Center for Medium Range Weather Forecasts (ECMWF), the place where I am currently a visiting scientist. Above is the link and below is part of the transcript.

“Thousands of miles from the storm here in England, that group of scientists were making cutting-edge calculations last week providing an early warning of the damage Sandy would do. It was a storm warning that must have seemed incredible to some. And because it was so early helped millions of Americans prepare for the worst. One week ago today, last Wednesday, Al [Roker] relayed a dire forecast on “Today” scientists in Europe predicting Sandy would hit the east coast. 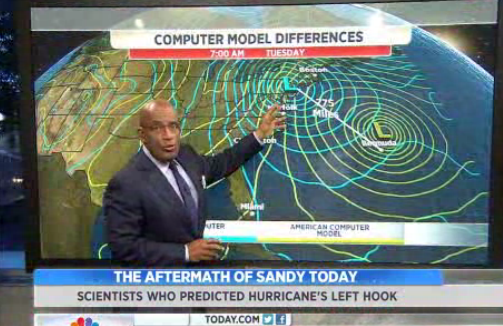 On the right is the prediction from the American model, on the left ECMWF. The European Center pretty much nailed it from incredibly far in advance. This prompted MIT scientist Kerry Emanuel to write a piece in the Wall Street Journal titled “Why America Has Fallen Behind the World in Storm Forecasting”

The early call came from the European Weather Center in England, 250 staff posting 150 million weather observations every day but have seen nothing like this: A hurricane making a left hook into the Northeast. [To meteorologist] When you first saw this, what was your reaction?

Alan Thorpe: “Obviously we were concerned. Even eight days ahead we could see the tropical cyclone developing. To assess the odds of Sandy hitting the east coast, their super computer had created 51 forecasts; all had one outcome. All took the storm north and then towards the eastern seaboard.” 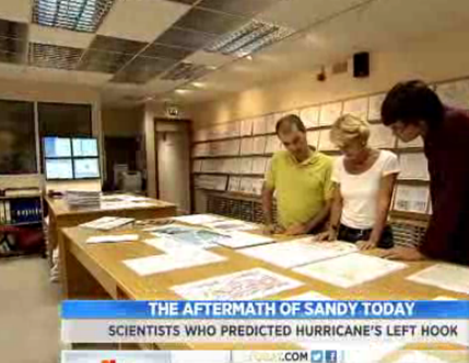 This is the map room on the second floor of ECMWF. In the middle is Anna Ghelli, a world authority on forecast verification.

Reporter: By the weekend, the American and European models had converged. Without these forecasts the human cost might have been far worse. [To meteorologist] Essentially you and the other 250 scientists working here probably saved lives?

Meteorologist: I think it certainly motivates all the people who work here” 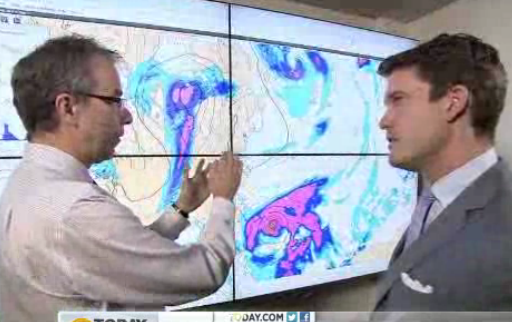 Alan Thorpe (left) and reporter (right) in front of “The Big Board”.

For more updates on the storm, easily the biggest coverage is over at the Daily Mail, lots of large photos and videos. There is a gallery of damage on Coney Island. Early estimates of damage are around $15 Billion, but some as high as $50 Billion- Hurricane Katrina was about $100 Billion. 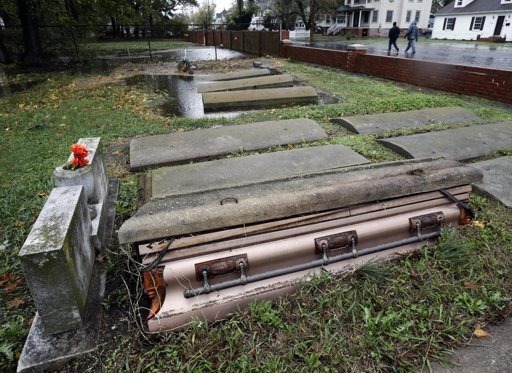 Caskets floating from a grave in Maryland

Posted by Thomas Pagano at 11:24 AM
Email ThisBlogThis!Share to TwitterShare to FacebookShare to Pinterest