This coming week, Hurricane Sandy could merge with a snow-bearing cold front to cause major losses along the East Coast of the US. Occurring at high tide, the financial district of Manhattan could be flooded. This trifecta of two storms colliding at high tide has been dubbed the “Frankenstorm”. Roger Pielke Jr discusses the projected losses as being somewhere in the $1-$10 billion range, depending on where the storm hits and how strong it is. 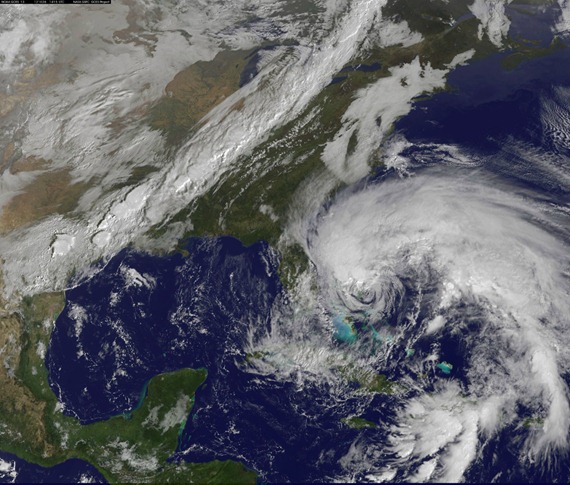 The best source of information on flooding is the National Weather Service Advanced Hydrologic Prediction Page. These are the official “single valued” forecasts that go a relatively short time into the future. 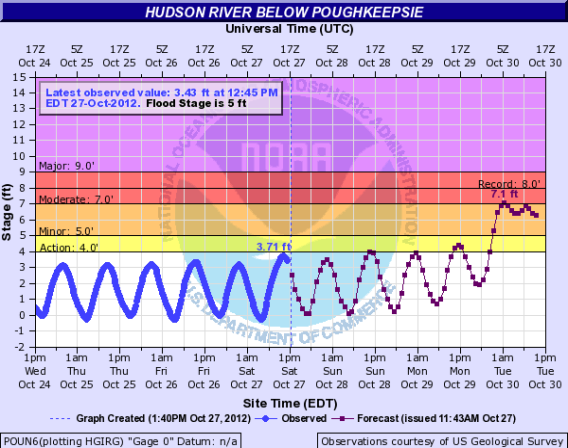 The forecast for the Hudson River upstream of New York City. The left side is what’s happened in the past, the right side is projected into the future. The oscillations are the ocean tides. 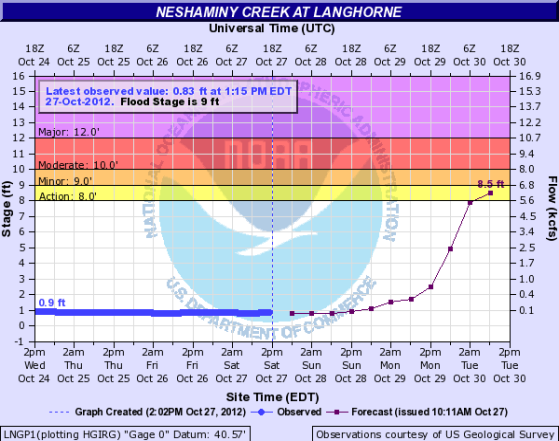 Here’s another station northeast of Philadelphia, southwest of Trenton

The official suite of products does have some information about the chance of flooding reaching different levels. These are the Ensemble Streamflow Prediction (ESP) products like so

Chance of flooding at Langhorne, PA.

The problem with that ESP forecast is that it doesn’t include anything specific about a rainfall forecast, it just assumes a wide range of future rainfall scenarios are possible.

That’s obviously not the case now because a hurricane is bearing down on the region. Now the National Weather Service is experimenting with linking the river forecasting models up to various weather forecasting models (in a process called MMEFS). Three weather models give a range of possibilities of what could happen. Here are the expected areas of flooding from one model (GEFS): 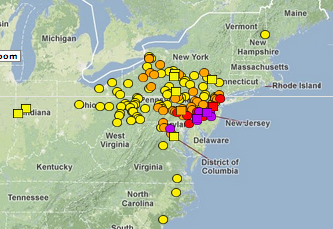 Here are some more charts of Langhorne:

The possibilities of flows 13 days into the future. Each line is a possible future.

Like the ESP plot, except when you consider the specific weather forecast for the next 13 days. Earlier there was about a 5% chance of a big flood, this now says there’s an over 85% chance. Some of the worst flood scenarios are eye-poppingly high (homes under ~15 feet of water)

Naturally, these are experimental forecasts and are dependent very much on where the hurricane actually goes. These experimental products are also not reviewed and approved by a human hydrologist, they are straight from the model, hands-off. In contrast, the official products are inspected and adjusted as necessary by a professional hydrologist who has local knowledge of ongoing conditions.

The amazing thing, however, is that every piece of information in this post was freely available on the Internet (from my room in England). Nearly everywhere else that I know of, the river forecasts are only accessible to a select group of people, such as emergency services personnel. They control access through special logins and such. If you have some thoughts on public access to this kind of information, leave a note in the comments section!

Posted by Thomas Pagano at 2:59 PM
Email ThisBlogThis!Share to TwitterShare to FacebookShare to Pinterest