In the background was a volcano spewing a 200-meter tall fountain of lava. In the foreground was an AK-47 wielding soldier. My immediate reaction on seeing this photo was “I need to go there.” 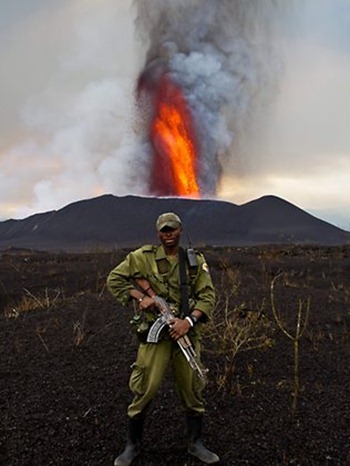 Clearly a place with issues.

I had much the same reaction when I saw my first photo of the dirtiest river in the world. If it weren’t so horrible, it could be art. It was so far outside the realm of my normal existence, getting to these places would become an obsession.

The Democratic Republic of the Congo’s Virunga National Park is a landscape in turmoil, like a “Hieronymus Bosch painting come alive”.

About 10 years ago, Nyiragongo Volcano erupted, flowing lava into the nearby city of Goma. It killed 47 people and left over 120,000 people homeless. It was the most destructive effusive eruption in modern history. It remains the most active volcano in Africa today. 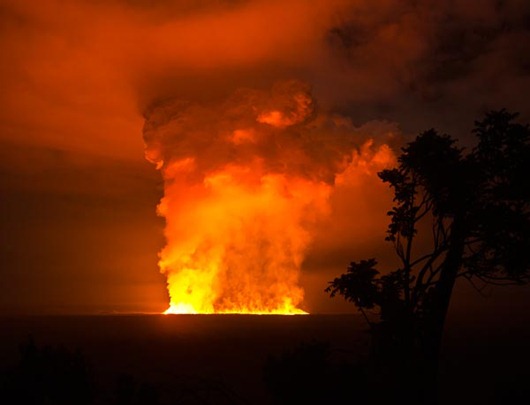 The volcano erupting at night

National Geographic described Virunga as “the crown jewel of the African Parks” in part because it is one of the last homes of the nearly extinct Mountain Gorilla.

“The gorillas share the park with tens of thousands of heavily armed soldiers engaged in a three-way guerrilla war between two rival militias and the Congolese army. The park is also home to poachers and hordes of illegal charcoal producers, and it is bordered by subsistence farmers and vast refugee camps overflowing with families fleeing the bloodshed. Caught in this vortex of human misery, it would be a miracle if the animals remained unscathed.” 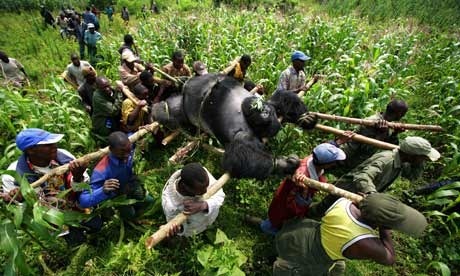 My friend Kelly showed me the photo of the volcano on her phone. We met on a bus tour through east Africa and were in Rwanda. She was proposing that a group of us split off from the tour, jump over the border into the Congo and then catch up with the tour in Kenya. “Seriously, it’s right over there, we’re so close”. 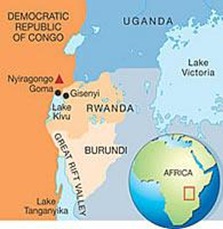 I was chomping at the bit to go hiking and the webpage said the “steep five-hour hike up Nyiragongo is rewarded with heady vistas of the world’s largest lava lake”. It was one of National Geographic’s best trips of 2012 and routinely makes it to the top of “disaster tourism” lists, alongside places like Chernobyl (another obsession of mine).

We were put in contact with a Congolese fixer. On such notice, tourist visas into the Congo through the standard route from Rwanda were “simply not possible”. Instead, the fixer said that we could drive up to Uganda and try our luck at one of the smaller border crossings, such as Bunagana. Our own research suggested this might not be a good idea. The UK travel warning for the Democratic Republic of the Congo (DRC) says:

We advise against all travel to eastern and north eastern DRC. The only exception to this is within the towns of Goma and Bukavu, where we advise against all but essential travel…. Avoid entering or leaving DRC overland from Uganda, Rwanda or Burundi except via Goma or Bukavu. However, care should still be exercised at this crossing point.

To summarize, “do not go to the Congo, in particular the Eastern Congo, especially this small border crossing with Uganda”. It continues

The defection in April 2012 of certain members of the [army to the rebels] has resulted in heightened tension and an increase in fighting in North Kivu particularly …adjacent to Virunga National Park, and the border town of Bunagana…. In early July, [the rebel force] increased its presence in or near the town of Bunangana… resulting in an increase in violent incidents. There have been fire-fights within Goma…. There has also been an increase in the number of displaced people in the region and refugees crossing the border with Rwanda in Goma. Insecurity in eastern DRC has allowed other armed groups in the area to operate more freely.

It all seemed awfully specific. After reading the warnings, most others backed out of our plans.

As a forecaster, I was intrigued by the risk management side of it all. Aren’t these travel warnings like predictions? They are based on expert assessments of the situation but contain uncertainty. Consider this US state department warning:

Armed groups, bandits, and elements of the Congolese military remain security concerns in eastern and northeastern DRC. These armed groups… are known to pillage, steal vehicles, kidnap, rape, kill, and carry out military or paramilitary operations in which civilians are indiscriminately targeted. Travelers are frequently detained and questioned by poorly disciplined security forces at numerous official and unofficial roadblocks and border crossings throughout the country. Requests for bribes in such instances are extremely common, and security forces have occasionally injured or killed people who refuse to pay. In the past year, several U.S. citizens were illegally detained by government forces. Very poor infrastructure (road and air) makes the provision of consular services difficult outside of Kinshasa.

How frequently is “frequently”? How common is “extremely common”? Do 9 out of 10 travelers to the Congo have problems? Or is it more like 1 out of 100? If I had more quantitative information, couldn’t I make a better informed decision? Maybe not if you read this. 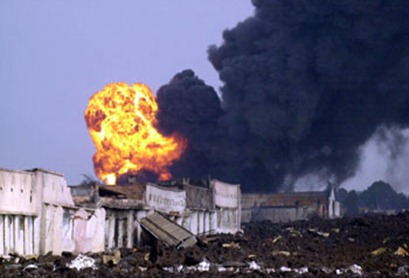 A fireball and black smoke in downtown Goma after lava flows from the volcano ignited a gas station, killing 50 people.

From Bunagana, we would take the back roads to the volcano. The fixer had heard of people going that route. The problem as we saw it though was that there were no back roads; Google Maps showed a large blank spot between Bunagana and the road leading south to the park. Google said you just can’t get there from here. 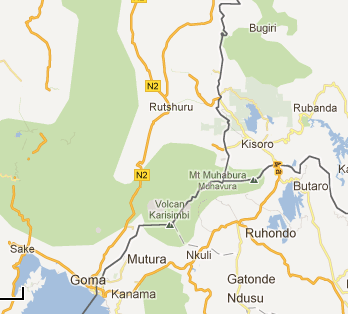 Instead of crossing from Rwanda to Congo at Goma (lower left), we were going to Kisoro in Uganda (upper right) and approach the volcano from the North. We were going to go along that short yellow finger of a road that seems to end (or does it?).

This was too much of a red-flag for everyone else and eventually it was just Kelly and me. The more dangerous it appeared, the more enthusiastic Kelly got. She had “volcano fever”. As a forecaster, I knew all the mental traps that lead people to ignore evidence and make bad decisions. I have had “flood fever” so I know what it looks like.

I knew the fixer had a vested interest in having us sign up for the tour (cash would be paid up front), so when he said “no worries, no problem” I pressed him for something more quantitative (e.g. “how many times have you done this before?”). Rather than accept the plan on emotion, I worked through a few contingencies. What happens if we are delayed at the border? What are the chances we could catch up with the tour? What are the costs if we are delayed?

This all went out the window when I found out that this region has the highest number of lightning strikes of anywhere in the world. Florida has the most lightning in the US. This part of the Congo has four times more lightning than Florida. Now that the weather hook was in, I was caught on the line. 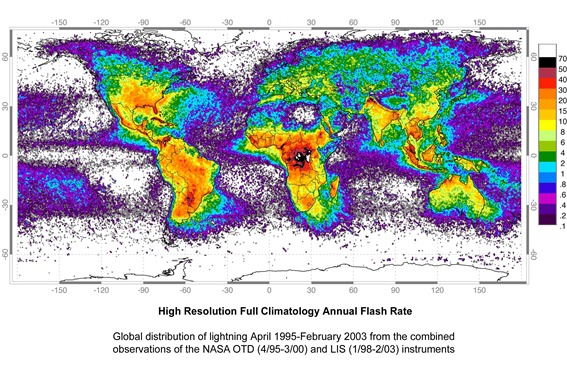 NASA’s map of average lightning flashes per year per square kilometer . The volcano is in the white area surrounded by black. It is quite literally off the charts, having about 150 flashes per year.

We had a final meeting in the evening with our fixer at an open-air cafe in Rwanda. That evening the power was out because of wind gusts and heavy rains. He arrived late so we had time to wonder what the rain meant for the dirt roads. “No worries, no problem” he reassured “tomorrow night you sleep on the volcano.” 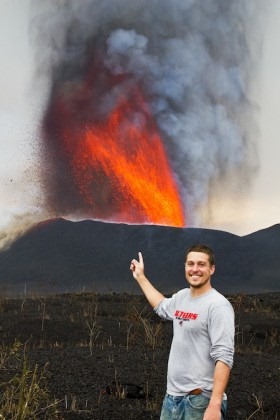 Posted by Thomas Pagano at 9:30 AM
Email ThisBlogThis!Share to TwitterShare to FacebookShare to Pinterest