For all my years of writing on the web, I’ve always wanted to post a drudge siren for breaking news. Finally here it is: 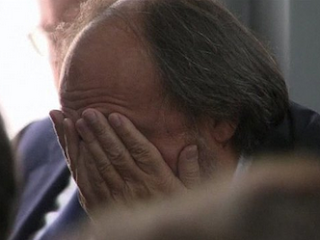 The BBC and the Daily Mail have some coverage on the news side of it. There’s also the Guardian. If you want deeper coverage, Nature has an excellent page.

UPDATE: As usual Roger Pielke Jr has some astute analysis. He quotes another source as saying "prosecutors didn't charge commission members with failing to predict the earthquake but with conducting a hasty, superficial risk assessment and presenting incomplete, falsely reassuring findings to the public." Basically (I think?) the commission quickly dismissed a dissenting voice (who turned out to be right).

An Italian judge sent shockwaves through the scientific world on Monday when he sentenced seven of the country's leading experts on natural disasters to six years each for giving false assurances before the earthquake that hit the city of L'Aquila in 2009.

…The prosecution, which brought charges of multiple manslaughter, maintained that lives could have been saved had people not been persuaded by the assurances to remain in the area.

The sentences handed out by judge Marco Billi were higher than those demanded by the prosecution, which had asked for the accused to be given four years each. The judge also imposed lifetime bans from holding public office and ordered the defendants to pay compensation of €7.8m (£6.4m).

Marcello Petrelli, a lawyer for one of the experts, called the outcome of the trial "astounding and incomprehensible". In Italy, convictions are not considered definitive until after an appeal, so it is unlikely that any of the defendants will go to jail immediately.

But the sentences are expected to cause uproar among scientists worldwide. Several international bodies had warned that a guilty verdict could deter scientists from advising governments in future

The decision to prosecute some of Italy's leading geophysicists drew condemnation from around the world. The scholarly bodies said it had been beyond anyone to predict exactly what would happen in L'Aquila on 6 April 2009.

But the authorities who pursued the seven defendants stressed that the case was never about the power of prediction - it was about what was interpreted to be an inadequate characterisation of the risks; of being misleadingly reassuring about the dangers that faced their city.

Nonetheless, the verdicts will come as a shock to all researchers in Italy whose expertise lies in the field of assessing natural hazards. Their pronouncements will be scrutinised as never before, and their fear will be that they too could find themselves embroiled in legal action over statements that are inherently uncertain.

Thanks Mike Cranston for the tip!

Posted by Thomas Pagano at 5:15 AM
Email ThisBlogThis!Share to TwitterShare to FacebookShare to Pinterest