There is a recent video from Portland, Oregon showing someone jumping up and down on a patch of grass like a trampoline:

Depending on where exactly this is, often times, landscapers will lay down plastic sheet on bad soil then plant sod on good soil laid on the plastic. If this is the case, a water line may have broke and now you have water under the plastic liner, hence the bubble. If it's not liquid, natural gas could also be a cause. The safe bet is though, there is a plastic liner under the sod and whatever is under the liner has caused the bubble.

There's an animated gif of someone walking on a turf blister:

Easily, the most impressive example comes from Greywolf Golf Course where this 18" high blister formed because of a pipe that broke under “creeping bentgrass on our fairway that has two much thatch.” 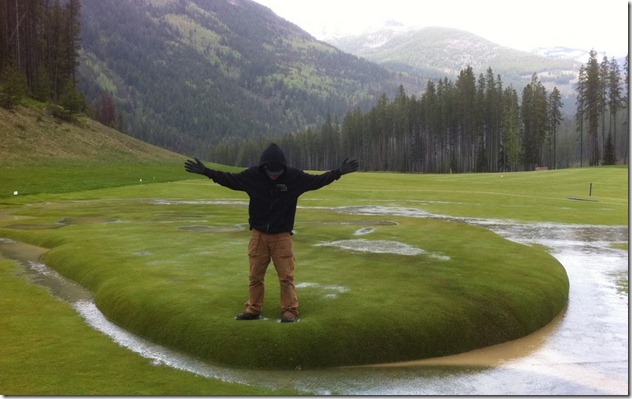 Greywolf also has this video of the blister popping:

But for a further introduction, here's an enthusiastic place to start with videos of bubbles under grass:

This dog didn’t quite know what to make of the bubble:

Because of the combination of artificial grass and underground pipes, these things seem to happen at golfcourses, such as this video:

Here some golfers laid down on the blister like a waterbed:

At around 0:16, a golfer lanced one of the boils with a club:

After popping this blister, water gushed out:

Posted by Thomas Pagano at 12:37 AM
Email ThisBlogThis!Share to TwitterShare to FacebookShare to Pinterest