Last week I participated in the Royal Society's workshop on uncertainty and prediction in weather, climate and applications. It was an interesting mix of weather scientists, social scientists, users and the media. I particularly enjoyed the discussions around the communication of uncertain information, comparing weather forecasting to other fields such as economics, medicine and so on. There are apparently some big changes underway at the UK Met Office and the BBC, moving away from "single valued" forecasts and more towards ranges and probabilities. An example of a well presented BBC forecast is here (the first case of using scenarios at the BBC, apparently).

The audience was a veritable "who's who" in the field. For example, I've been a long-time reader of Judith Curry's Climate etc. blog and she's posted her own background material on the workshop, including links to the agenda and so on. Her post already has close to 300 comments so anyone interested in this field should take a look. 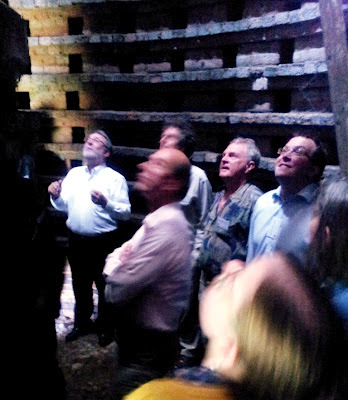 In the Dovecote (Pigeon house) with heads of the river forecasting systems for Bangladesh and Pakistan (Peter Webster, center) and Europe (Florian Pappenberger, right). Suitably blurry for an uncertainty conference.

Perhaps the most interesting analogy for me came during the closing remarks. Tim Palmer noted how the building for the conference was the home of Alan Turing during World War II. Turing is the father of artificial intelligence and put forward that a machine is said to "think" if a human could have a conversation with it (e.g. "what did you think of last night's football?") and the human couldn't tell that he was talking with a machine. Similarly, weather models have become so good that one can look at their output and see extremely realistic features, such as the size and shape of storms. We can't say the same for climate models, their results are still fairly cartoonish. I wonder what could be said for hydrology models?
Posted by Thomas Pagano at 4:45 AM
Email ThisBlogThis!Share to TwitterShare to FacebookShare to Pinterest