[Speaking of underground rivers, just a few hours ago the voting closed on who would be included in the New 7 Natural Wonders of the World... One of the winners was the Underground River in the Philippines we visited a few weeks ago! I had been saving up a series of posts about it, but had to write early to celebrate the good news. The river has lots of twists, as does its human story, so we'll read about it over a series of posts. Here's part 1 -- Tom]

We didn't have plans for the first night we arrived in Puerto Princesa, but somehow we ended up at the Mayor's birthday party. We had come to the Philippines to see the Puerto Princesa Underground River, a hydrologic oddity that stands out on many accounts. Unexpectedly, we also discovered a wildly popular politician who can list fixing geologists' mistakes among his many accomplishments. The science of the river also plays a subtle role in local and international geopolitical conflicts. And here we thought this would just be a vacation spot.

The centerpiece of eco-tourism on the island of Palawan is the Puerto Princesa Underground River. It was considered the world's longest (at 8.2 km) until someone discovered a 10 km underground river in Mexico. Instead, it enters the record books with an asterisk as the longest underground river "in Asia" or the longest "navigable" underground river. In 1992, the management of the river was transferred from the federal to the city government, an unusual step that has been surprisingly successful. The whole area has been described as a model of local governance, conservation, and sustainability. Tourism has been increasing hand over fist in the area in the last 10 years.

First off, how did the River get underground? Sometime over 20 million years ago, things in the ocean died, as they do. Their bodies sank to the bottom and left deposits that turned into carbonate. Among other things in the cave, they just found a mint condition fossil of a sea cow/manatee from 20 million years ago literally sticking out of the wall.
As tectonic plates shifted, some of these deposits rose above sea level. Carbonate dissolves in water more easily than other rocks and so as rainwater-turned-groundwater seeped through, some of the rock was left behind as carbonate was washed away. Small empty spaces inside the rocks started to grow and grow. When this process gained momentum, entire underground caverns formed. Most caves have water dripping through them (forming the well known stalactites and stalagmites), but in the case of Puerto Princesa, one of the caverns opened to the surface and an entire river flowed in, and this now continues all the way through the cave and to the ocean. This didn't just start recently, some of the upper parts of the cave are now dry; water used to flow through them but they have been cut off from the river as the mountains continue to get pushed up.

A few things make this river especially special, as outlined by La Venta (an Italian team of cavers that have studied the region up one side and down the other). The River empties into the ocean so part of the water in the cave is fresh and part of it is salty and this changes with the river flow and the tides. The cave has over 10 million swallows and bats among other living things. The bat poo mixed with seeping cave minerals make for some rare types of stones. Although tourists can access fairly impressive rocks, the currently off-limits area has some dazzling crystals. La Venta has a series of really quite good videos (1, 2, 3, 4) and a photo gallery that capture the Underground River and its crystal caves. La Venta isn't just doing this for fun, they measure all kinds of things inside the cave and have published several scientific articles. They also have facebook pages and galleries, some of which are shown here: 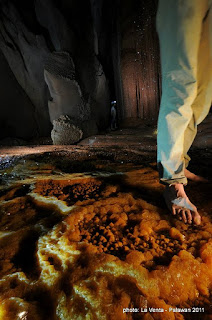 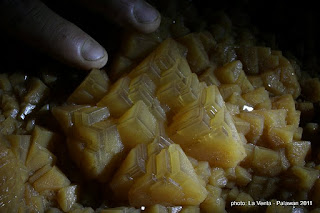 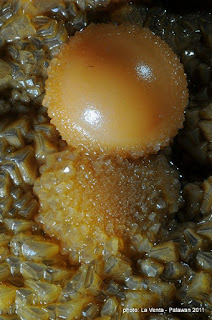 Many caves are extremely fragile because they have been sealed off from the outside environment. Opening them up to visitors disrupts the balance, damaging the structures. It's a bit like something starting to spoil once its packaging is opened. This damage is just from a chemical/heat point of view, never mind outright vandalism (in a cave I visited in Arizona, folks in the previous century would fire off pistols to impress their dates... That cave now has a giant metal door and airlock to control changes in temperature and humidity, among other things).

In comparison, Puerto Princesa's Underground River has water sloshing in and out and creatures flying about. By one back of the envelope calculation, 150,000  people would have to live in the cave full-time sweating and letting off body heat to match the natural energy fluxes. So go ahead and visit the cave, guilt free! The cave is so accessible that even someone who can't walk could do the tour (I speak from experience, read more later).

Aside from being scientifically unique, the river also has a twisty political back story. Which brings us back to Mayor Ed Hagedorn, a driving force behind popularizing the river... Meanwhile, back at the Mayor's birthday party...

Posted by Thomas Pagano at 6:53 AM
Email ThisBlogThis!Share to TwitterShare to FacebookShare to Pinterest