I stepped off the train at Southern Cross station in Melbourne and smelled smoke. I looked to my phone and opened EmergencyAUS (free). I started to submit a report. My options were:

I picked “smell”. I was then guided through another series of multiple choice options to describe my situation. Eventually I constructed:

“I can smell… smoke… at my current location… now.”

EmergencyAUS then showed me that a lot of other people in Melbourne smelled it too. By the looks of the map of everyone’s observations I was on the western edge of the plume; icons of noses were densest in the northern suburbs but there were reports extending straight down to the coast an hour away. 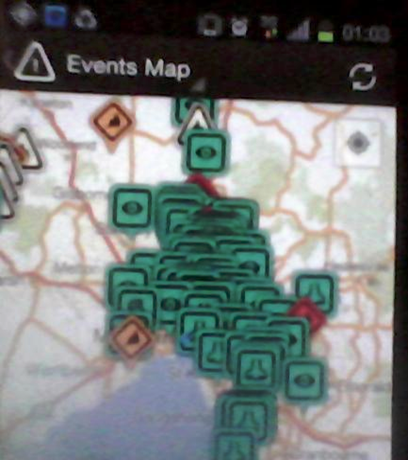 Some people didn’t just smell the smoke, they saw it. Craigieburn to the north had a cluster of icons of eyes: “I see… a plume of… smoke… at my current location… less than an hour ago…”

One of the eyes on Napier Street (3.4 km away) uploaded a photograph of a large plume of smoke that I could download. This made me realize that when I sat down at work this afternoon and looked out the window, I also saw the plume of smoke but didn’t know what I was looking at at the time. 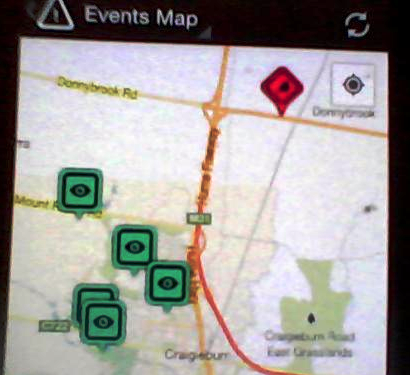 Ordinary citizens aren’t the only ones on EmergencyAUS. The metropolitan fire brigade submitted its own blazing red icon on the map indicating “Non structure fire: going. Not yet under control- more resources requested” (upper right)

The Country Fire Authority (CFA) had its own white icon with “fire warning advice”. The advice described the situation, gave advice on what to do and included links to more information and where to get situation updates.

Earlier today EmergencyAUS pushed alerts to me that happened within 1 km of my home. For example, 6 minutes ago an alarm went off on Collins street. Earlier this weekend, I heard two sirens drive by and after checking my phone I knew where they were going. Bigger search areas are possible but the city is a busy place and I didn’t want warning fatigue.

EmergencyAUS is not just about fire. Citizens can report and learn about floods, earthquakes, tsunami and so on. They can report that they are being evacuated by the police, are without power or even are looking at a destroyed bridge (!). There is mutual community support: “I need…a generator…at my current location… now” through to “I know where to get… bottled water…”.

Who is doing this? EmergencyAUS says little about what is supporting it except to say it’s “Built by Gridstone and powered by Ripe Intelligence”. The application is free for use in one state. To subscribe to all states is $24.50, or $4.50 per state for a year.

Extra: there is another app called FireReady. While EmergencyAUS is all emergencies, FireReady focuses on bushfires and gives more detail. It too says that 30.79 km to the north 70 emergency vehicles have been attending to a large (1900 hectares) grass fire since yesterday. There are reports of wildfire on the roads and the app gives a list of what to do to stay safe. I first learned about FireReady driving by a billboard.

2 comments Posted by Thomas Pagano at 11:36 AM
Email ThisBlogThis!Share to TwitterShare to FacebookShare to Pinterest