Probably one of the most enjoyable parts of the conference was interacting with students. Many of them were wanting advice on how to live overseas. One middle-aged woman shared her concerns about thinking that she wasn’t going to get a good letter of recommendation because her supervisor would be unhappy at her leaving… but then if she did manage to go overseas and couldn’t get a permanent job there, she would have burned her bridges professionally, making it all the more difficult when she returned. 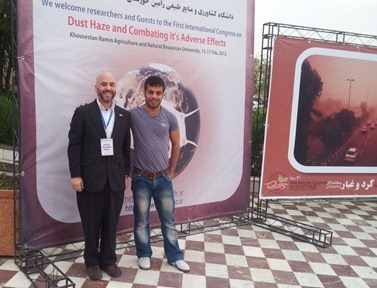 This student was also a bodybuilder. His biceps were like cantaloupes. The banner in the background shows a globe wearing an air filter mask.

However, for many of them, interacting with a foreigner, especially an American, was a complete novelty. They had a million questions about what cities had I been to, what I thought of Iranian people, what I thought of Iranian government, what about American government, what was America like, what was my family like, what was my religion? We even discussed what we typically eat for breakfast. Sometimes students that were too shy to talk would just gather to watch me, say, drink a cup of tea or peel an orange. I’d scratch my nose and a nearby gaggle of girls would giggle.

Originally, this was hard for me to understand. Why would anyone be so inquisitive? And how did they get so much misinformation about us? Then during the group photos for the closing ceremonies, I stood next to a senior scientist that leaned in towards me and whispered “You’re from America eh?… I am from Iraq.”

I was stunned. Now I was the student, repeating the million questions back to him. I felt like I had met an extraterrestrial and was trying to extract all the secrets of the universe from him. I didn’t know what to ask first. What’s it like in Iraq? Do you sleep standing up? May I watch you peel an orange?

A special moment came when I was introduced to the religious leader of the university. We talked about dust and water, religion and science, Iran and America. Islam is a wellspring of insights about the nature of knowledge and the knowledge of nature (Zoroastrianism, the original Persian religion, also taught ecology but that’s another story).

The Koran tells a story of a man that was rewarded with heaven for giving water to a thirsty dog [Islamic dogs usually don’t get much respect, they are forbidden as pets]. Water is such a fundamental human right that Islamic law prohibits interfering with an enemy’s water supply (e.g. destroy its dams, poison its wells, block supply convoys), even if you are at war. If your enemy asks for water, you must give it to him, even if you are on the battlefield. By sharing water, one is sharing peace. I offered that in a similar way, Iran’s home-cooked food could be an instrument for diplomacy; come, friends, let us beat our swords to make kabob koobideh. 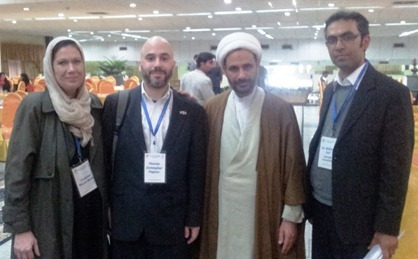 Kitty, me, the Ayatollah’s representative, and Dr Sari

During one of the talks, a speaker drew connections between drought and dust. In particular dry lakebeds are a major source of dust. Drought had hit the region badly and nearby Lake Urmia had fallen so low that it bloomed red. He likened the color to nature’s traffic light, signaling that whatever was happening needed to stop. This and dust were symptoms of lack of balance in the environment. It wasn’t alright. People were suffering. The environment was being broken.

Beneath their layers of grime and pollution, I found the scientists of Ahwaz clean and pure, smart and engaged. And they were serious about their water- my next stop was going to be the largest earth-fill dam (by height and dam volume), Upper Gotvand Dam, under construction only about 100 km north of the city.

Posted by Thomas Pagano at 3:50 PM
Email ThisBlogThis!Share to TwitterShare to FacebookShare to Pinterest