Although not hydrology related, one of the strangest things for us in Iran was money. One of the hardest struggles for us travelling overseas has been getting money- not having it, but getting it. The suffering is mostly our fault for trying to live off an American credit card registered to an Australian address (but to an American phone number). Just think of how many websites reject our debit card on a technicality, such as our Australian zip code only having 4 digits (the US uses 5 digits). Going to Iran, however, was a whole other level of punishment.

The US has had economic sanctions on Iran for decades. With the renewed tensions about nuclear research, Obama passed a raft of new sanctions. Every so often new sanctions are announced in the media but you almost never hear specifics about what they entail. It’s like a parent downgrading a child from “you are grounded” to “you are so grounded” to “you are so grounded, it’s not even funny”.

For an ordinary citizen, it is hard to track down the rules, in part because the sanctions are sweeping but there are also over approved 10,000 exceptions. For example, it took me a couple days to appreciate what was wrong in this picture… 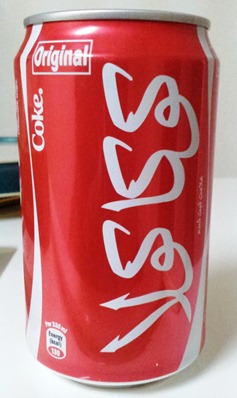 How does someone like Coke get approval to do business Iran? Can you think of another company that is so quintessentially American? Coca Cola is viewed by some as Liquid Imperialism, one of America’s most successful tools for exporting its way of life.

The kicker? It’s being bottled at the plant on Khomeini Boulevard, the leader of the 1979 Revolution.

Briefly, here’s what American travellers in Iran should know: The unit of currency is the rial but nearly all prices are quoted in toman (1 toman = 10 rial… If rial were pennies, toman would be dimes). Confusion about toman versus rial usually never works out in the favor of tourists.

Credit cards and ATMs do not work (we saw one “Mastercard” sticker in the window of a store, but I think it was being ironic). Cash is king. Some businesses take US bills, but the exchange rates are more of an opinion than a reality.

Prices are usually unlabeled (unless it’s in Persian script) so negotiation is expected. Iran is not that unusual in having a culture of bargaining, indeed countries like America or Australia are the global exceptions. But count your change, I’ve paid everything from $0.15 to $4.00 for a bottle of water.

Iran has issues with inflation (22% per year), partly because of government incentives to keep investments in Rial. Banks offer 18.5% interest rates for certificates of deposits (CD). That means you would double your money in about four years. Compare this with the CD rates of about 1% in the US. Good luck on extracting your money back into US dollars though when your term is finished. The Iranian stock market is nearly decoupled from the rest of the world- during the recent Global Financial Crisis, Iran was the only country whose stocks went up.

Many websites said that crisp new $100 bills would get us the best exchange rates. Our last stop on leaving the US was the bank where I scrutinized bills obsessive-compulsively, asking to change out anything with a fold or a smudge. I did figure that asking them to vacuum-seal my withdrawal would be too suspicious though.

The official exchange rate from US dollars to rial is about 12,300. Given that we had to change over a month’s worth of money on arrival and would have to pay all our hotels and expenses in cash, we ended up with around a shoebox-sized stack of bills. I have never felt more affluent than the day that I sat in the restaurant of a 5-star hotel wearing a suit with every pant and suit pocket stuffed with Iranian bank notes.

The street market exchange rate is more like 16,000 rial per dollar (a difference of nearly 30%). That seems like a situation that is ripe for arbitrage, buy dollars at 12,500, sell toman at 16,000 and keep the profit. However, when we were leaving Iran and wanted to change our money back into dollars and heard a rumor that they no longer buy rial from foreigners at the airport. That meant that instead of arbitraging we were going to be arbitraged.

When I approached the teller’s window at the airport, I got a disdainful sneer and a “tsk tsk tsk”, which translates into “what makes you think you could even ask?” The only people that could change rial into dollars (at the excellent 12,500 government rate) were locals. Here was half of the line at that counter:

Money lines at the airport

If you squint on the floor between the two men on the right you’ll see one of the several briefcases full of money that they were trying to dump on the desk. Several of those in line were carrying stacks of ten or more passports, each trying to exchange at the limit on behalf of their entire traveling party.

The flustered attendant in the booth made an announcement (in Farsi) that evoked an upset roar throughout the terminal. Men in the line were having heated arguments with each other and the security guards had to come to restore order.

Before we went to the airport, our local friends suggested that we use our remaining money to buy gold because it was very cheap in Iran. That seemed like madness, but some googling suggested there’s some truth to the idea that someone could arbitrage gold prices.

We had heard about Iranian gold in another context- a common pre-negotiated wedding agreement (called Mahr) is that a woman would be paid her weight (in kg) in gold coins were a couple to get divorced. These gold coins are illegal to take out of Iran (they’ll seize them at the airport). So our option would have to be going down to the market where gold jewelry is priced by weight. Good luck trying to change a tennis bracelet for euros at the Travelex in our next country!

Oh, also, while we were in Iran, our assets were frozen by the US government. We didn’t know how long our visa was going to last in Iran so we didn’t but an onward flight until after we arrived. When we were preparing to buy our exit flight, I logged onto my bank account online to see if there was enough in my checking vs savings account.  Within hours I got an email from my bank saying:

Your account was accessed from or an attempt was made to access your account from a country restricted by the United State Office of Foreign Assets Control (OFAC).

[Our] policy requires compliance with economic sanctions imposed by OFAC in every country in which [we do] business…. [We are] required to take appropriate steps to comply with OFAC-imposed economic sanctions, including being familiar with the various sanctions programs. As such, a business decision has been made not to allow account access from the jurisdiction from which your account was accessed….

If we do not remove the restriction from your account, you have two options:

We didn’t even buy anything, it was just the act of logging on from a computer in Iran that caused the violation. To get my money back, I had to first call the bank and give them an explanation, fax them a form with the same explanation, then leave the country, access my online account from a computer outside Iran and then call my bank again to verify. It took less than a day for my account to be reactivated.

That said, as punishment, I fully expect to get audited on my taxes this year. I can’t think of anything else I could do to set off more red flags. If I do, then I’ll probably “get so audited, it’s not even funny.”

Posted by Thomas Pagano at 3:06 AM
Email ThisBlogThis!Share to TwitterShare to FacebookShare to Pinterest