Iranian Students are Hungry (My Advice to Students)

Probably one of the most enjoyable parts of the trip to Iran was the chance to interact with Iranian students… lots of them! Many of them were looking for advice (which I have included in the bottom of this post). Note that there are lots of good webpages for academics looking for jobs, such as the DISCCRS career resources webpage. Specifically for meteorology, AJ Jain has an entertaining and informative blog.

Students in the Esfahan Geography department where I gave a talk on climate change and water. My host, professor Abolfazl Masoodian is in the red shirt.

It seems common for US graduate school departments to have more than half of their students from overseas. The bulk of them come from China and India but a disproportionate number come from Iran, especially compared to other Middle Eastern countries. For example, even though Egypt has more people than Iran, Iran publishes over double the scientific journal articles as Egypt and nearly eight times that of Saudi Arabia (never mind the isolation imposed on Iran, discussed previously). Over a million Iranians live in the US.

Not to generalize along racial and national lines, but the Iranian students I meet overseas are intelligent, hard working and eager to exchange ideas. I would add “well-dressed”, but when I asked an Iranian classmate what her fashion secret was, she said she shopped at The Gap. “It’s nothing special. It’s just that you Americans don’t know how to pick clothes that fit you well.” 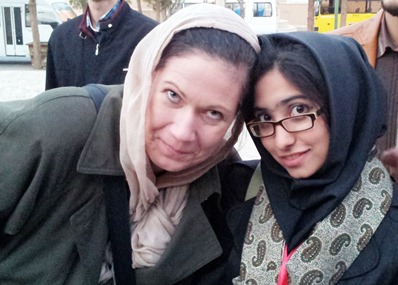 This student translator for the Traditional Water Management Conference in Yazd was a pip.

In Iran, many students were keen to meet a foreigner and practice speaking English. Many people wanted to pose for photos with me at conferences even though they didn’t know me or my work. A number of times this rapidly escalated into very hospitable invitations like “It would be my honor for you to stay at my house, have dinner with my family and allow my uncle show you the sights around our area”. I heard from Rick Steves “if you want to eat well in Iran, make some friends” and I now completely agree but more on that later…. 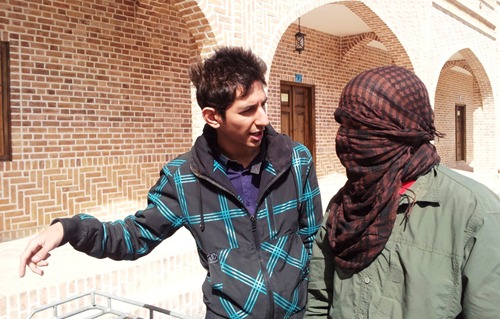 This student in Ahwaz (Fazel Almasi) took us out to desert to go camping and motorbike riding in the sand dunes. Here he is teaching me how to dress like a Basij.

Students in Iran seem to “get it” and want to get more. I have visited 15 countries so far this year and here more than anywhere else did the students seem to comprehend my lectures (a challenge in non-native English speaking countries). They asked questions on par with what I would get in Australia or the United States.

When it came to interactions, it was like they were hungry and I was food. It was typical during breaks for them to come introduce themselves and then engage to the point where they eventually had to apologize that the break was over and now my tea was cold (“It’s ok, it happens every time”). 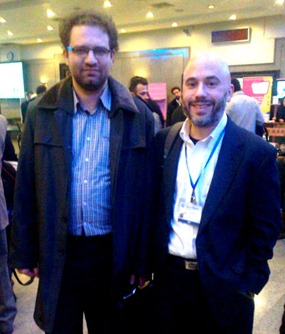 Mahdi Moayeri (left) is a PhD Candidate of Water Resources Engineering at the University of Tabriz. He asked good questions and captured my answers with a hand-held recorder. It’s an extremely good idea to keep notes with a digital recorder, even if it’s just your mobile phone. I would recommend bringing something like that to classes and meetings with your advisor.

Nearly all the students asked about how to get sponsorships to go overseas and here’s some of the advice I gave. My experience has been in hiring people for government jobs and for post doc positions. Personally, I don’t know that much about funding, but some Googling turns up some tips for students looking to get money to study in the US.

First, my priorities for skills in a candidate (most important first, not a complete list) would be 1. English communication (written and spoken), 2. Scientific computer programming and 3. Initiative and resourcefulness (e.g. being effective and proactive).

Don’t be afraid to have many people proof-read your application for grammar and language mistakes; it should be flawless. I have literally seen applications thrown in the trash because of poor English in the cover letter. Expect there to be a phone interview or Skype call to test your communication skills. Video is more personable than audio on Skype but nearly every Skype call I’ve had with a candidate had technical problems (which is itself a test for the candidate). Improve your English through practice and training. We met many people that would go down to tourist spots and talk with strangers (if they didn’t have enough money to pay for a course).

Find out what the local customs are in applications. In some countries, it is ok to have your photograph on your application, in others it is weird. It is illegal to ask for an applicant’s marital status, age, or religion in some countries although people hiring might try and guess it anyways (e.g. someone who graduated college in 1996 was probably born in 1996-22=1974). In a similar way, employers are only supposed to judge you on your provided materials, but it would be naïve to assume that they won’t Google you or try to find your photos on Facebook. Ask ahead how complete of a resume you should send- I have a 2 page and 20 page resume depending on the situation. Some people find applications with lists of personal hobbies endearing but unless it is something special (e.g. caring for orphaned sharks) or is relevant, it is better to leave that off. 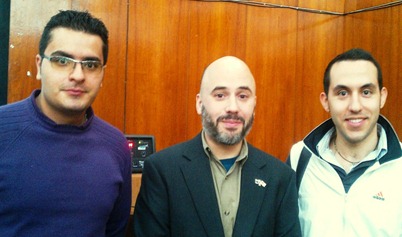 With engineering student Babak Rouhi Broujeni and friend after my talk on river forecasting at Shiraz University.

For scientific computer programming, experience in Excel is not enough. Standard programming packages are R and Matlab. Knowing languages like Fortran, Unix and Java help. Don’t be afraid to include a clean, brief and well-commented example of an interesting computer program you’ve written. You get bonus points for knowing how to manage code like a professional, such as by using version control (e.g. SVN).

Contact others. I strongly recommend that applicants look for people that have been recently publishing in their field and contact them directly looking for advice. Many researchers would be happy to respond to a brief, well-written, and specific request for information. Aim for someone mid-career- very senior professors will not likely have the time to help you. Networking is extremely valuable, in part because it helps your application stand out among the others because of that personal contact.

However, be genuine and targeted in your networking, do not simply spam dozens of people with the same letter- prove that you already know something about the person you are contacting (e.g. “I am interested in doing research on Gloops. I enjoyed reading your recent paper in the Journal of Gloopology where you showed how Gloops could cohabitate with Nits. In my studies, I did a project on Nits. Are you continuing this line of work and, if so, what do you feel are the interesting open research questions?”). 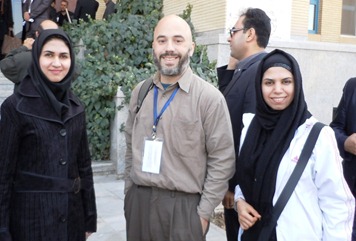 Think ahead about who can give you good letters of recommendation. There are many websites giving advice on letters of recommendation, but this is a special issue for developing countries where some are concerned about brain drain (i.e. students moving overseas and never coming back). We met people that were very good students but were also worried that their advisors would not support them. The professors we met were somewhat split on if it was respectable (or unpatriotic) to leave Iran. If moving overseas is what you really want, see what has happened to a professor’s previous students and how they were helped/held back.

Realize that living overseas is not easy. Your parents no longer feed you, shelter you or do your laundry, for starters. But imagine how hard it is to develop meaningful friendships in a strange land. I have met many people working overseas that say they are lonely and alienated. We commonly heard things like “Those that have moved out write back saying that America is the land of easy money and excitement, but that they want to die in Iran because they miss their friends, family and culture”. For forming social networks overseas, I recommend joining clubs and group activities (e.g. Meetup). When I moved to Australia I joined groups for hiking and playing board games (two different groups, not at the same time) and it was surprisingly fun.

Some students were very eager to get suggestions for research topics for their Masters Thesis or Doctoral Dissertation. More than anything, I would take cues from your advisor on what he or she is interested in. Your advisor needs to be able to advise you and this is difficult if you have picked something far outside that person’s expertise. That said, Masters’ projects are often based on a work plan suggested by the advisor while a PhD project usually involves more independence and creativity. The standard is that by the end of your PhD, you should be the world’s authority on your specific topic.

To this, one student replied, “But my advisor doesn’t care what I do. He said that I should work on whatever I want.”  That student may want to go work with orphaned sharks and to ask for his diploma to be ready when he returns in four years.

The photo is blurry because it was hard to get these energetic ladies at the Dust Conference in Ahwaz to sit still.

Ultimately, a big part of what I’ve learned about both forecasting and living/travelling overseas has to do with constantly honing one’s skills at collaborating and negotiating with others. I’ve heard you should focus on first, understanding, and then on being understood.  This especially holds true when you want to pick up stakes and move into another culture.

If you’re like me, you’ll know that things are going right when you feel a little outside your comfort zone, a bit unsure and anxious but always learning something new and building new skills for the long run.

In other words, students, stay hungry.

Posted by Thomas Pagano at 12:16 PM
Email ThisBlogThis!Share to TwitterShare to FacebookShare to Pinterest