In 2000, my graduate school advisor Soroosh Sorooshian asked me to write a report about the climate of the Middle East. How did things like El Nino affect rainfall in the area? Being Iranian, he had a personal interest in the region and was preparing for a few invited talks overseas.

I reviewed the literature of past studies and looked into databases to see what historical data (for rainfall, river flow and so on) were available. I thought it strange that Iran had a dense network of measuring stations but that the data abruptly ended around 1978. For over 20 years, Iran was the largest blank spot over land (other than Antarctica) in international climate databases. 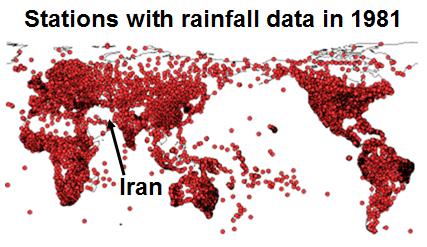 This is the station inventory of the GHCN database, filtered for those places that had data in 1981. Note the big gap over Iran. Other big gaps (e.g. southeast Saudi Arabia, Northern Africa, western China and western Australia) are dry uninhabited deserts. I made this graph online in a minute using the Climate Explorer mentioned below.

Of course, 1979 was the Iranian Revolution and the overthrow of the Shah. What I was seeing was not so much a dismantling of the network as it was Iran’s unwillingness to share its climate data with others (e.g. America).

During the project I started contacting researchers who had been doing studies in the Middle East and made many lasting relationships out of it. I met Heidi Cullen just as she was finishing her PhD from Columbia University, looking into climate patterns in the Tigris and Euphrates Rivers. She later became the head climatologist for the Weather Channel and a household name among global warming experts. I also became an early user of the Climate Explorer which is the most powerful—and free— interactive Internet-based tool for analyzing climate data that I know of. Geert Jan van Oldenborgh made it in his spare time in part to allow scientists in developing countries to do research without them having to get together all the data and write their own computer codes. Nearly all the graphs in my Master’s Thesis were made using the Climate Exploer. Strangely, we emailed for 12 years before meeting in person for the first time.

I developed a similar virtual relationship with Jafar Nazemosadat, director of the Climate Center at Shiraz University. Whereas practically no studies existed at the time for places like Syria or Saudi Arabia, Jafar had published a long list of papers studying rainfall in Iran. He also had up to date data (!) after the Revolution. Most astonishingly, he had a complete set of streamflow data on Iranian rivers. Rainfall data was one thing but river data is practically a state secret. For example, Heidi Cullen was only able to study Euphrates streamflow from 1938-1972 because after 1972 upstream Turkey decided to stick it to downstream Iraq (and the rest of the world) by making the data classified and protected.

It’s the same in many places – good luck if you’re a downstream Bangladeshi asking for river data in upstream India, even if a flood is racing towards your common border. I can tell you how much it rained yesterday in two dozen cities in North Korea but as an American scientist I think I would have nearly a snowball’s chance in hell of knowing what any of that country’s rivers did in the last twenty years.

Even though we had never met, Jafar and I agreed to write a paper together along with Soroosh and another student Shayesteh Mahani. It was published in the Iranian Journal of Science and Technology in 2003. I also put Jafar in contact with those in charge of international climate databases, to see if his records could help fill the large gaps that were there. This act of back-door diplomacy was one of my prouder moments and got me hooked on trying to recover hard to get international data (read more about data rescue here).

We finally decided to meet in the lobby of the Esteghlal Hotel in Tehran while Jafar was visiting on his way back to Shiraz. I had never seen a picture of him before and on first meeting, he reminded me of an Iranian combination of George Clooney and Dustin Hoffman. A gentle but vaguely subversive Western refrain came from the lobby piano and I thought of the defiant piano in the movie Casablanca. The hydropower conference organizers were celebrating the end of a long and exhausting week, toasting each other with pistachio ice cream. 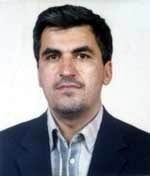 Jafar continues to publish articles looking at Iran climate from every angle, how the winds behave, how much evaporation there is, how much the sun shines. He has also become popular for making his own forecasts of drought (in addition to and sometimes different from the official forecasts made by the Iranian Meteorological Service). For those of you familiar with the Colorado River, Jafar is similar to Klaus Wolter by being an academic and local celebrity that makes his own realtime forecasts.

These are mostly forecasts of rainfall because drought and pumping out of groundwater have made central and southern Iran’s surface rivers all but disappear. The Karun River in Ahwaz is the only navigable river in Iran but it now dries up in the summer because new major dams hold back the flow. 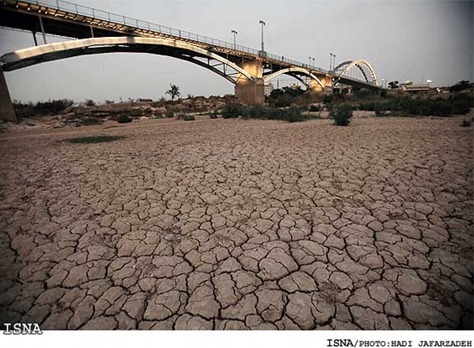 When I asked him if he had any unusual stories of forecasting, he was quick to rattle off a list of cases where things went wrong.

When we first wrote our article together, people were starting to get interested in forecasts of not days ahead (in the case of weather) or months ahead (in the case of climate and El Nino) but rather a few weeks ahead. Jafar closely tracks the winds and rains in Africa and southeast Asia, watching as something called the Madden Julian Oscillation slowly circles along a belt around the equator. Although the forecasts are nothing exact, he can see that rain in one spot is going to mean more rain in Iran around 10 days later (give or take a few days). After that, the rain moves on and then there tends to be a dry period (maybe, maybe not) and then a wet period again (eventually) and so on in a syncopated broken beat.

Two years ago one of these waves was going to be passing through during a critical phase of the growing calendar. Farmers were wringing their hands, worrying if there was going to be enough rain to make it worth it for them to plant crops this year. Jafar’s forecast suggested that there was going to be ample rain in 10 days and he received widespread media coverage of it. The message they heard was “go ahead and plant”. The countryside was mobilized to get ahead of the rains.

Of course that spurt of rain did come but then the beat dropped out and all that was left was a chorus of sunshine for several months. The crop losses were catastrophic and the farmers turned to the government agricultural agencies for help and explanations. That office then firmly planted to blame back to Jafar for misleading the people.

If rain were like one’s salary, this would have been like a fortune teller saying “you are going to come into a large sum of money” and you going out and buying an expensive car in celebration. What you didn’t know was that large sum of money was a severance package from you losing your job.

In Jafar’s mind, however, it was a good forecast. He said there would be good rain in 10 days and there was. He also said it would be dry over the 3 month period, but many people didn’t appreciate the implications of this. The forecasts were correct on paper, there were just problems with interpretation and using the forecasts to make the right decisions. “Even highly educated people in government offices don’t understand that a forecast for rain in 10 days doesn’t mean that it will be wet all month.”

Since then he worries about advertising his forecasts too widely. His colleagues have pressured him to not make forecasts, because it could damage the University’s reputation. It would be safer to simply stick to doing studies and publishing papers in academic journals. Jafar feels strongly though that the science must be tested in the real world and put in to practice, otherwise who is he helping and what is the point? Besides, if his theories can only explain the past but fall apart when trying to explain the future, how does he know that he’s not just kidding himself about what he thinks he knows?

Regardless, “There is no score for promotion at University for doing such things as forecasting [or working directly with users], it’s just about publications. If you write a paper, call it forecasting and get it published in a journal, that’s one thing. But if you do real forecasting, if you apply your knowledge…” he shook his head sadly “—no value, no value…. If you write in the scientific journal, you can get [rewarded], but if you write in the newspaper, it’s not useful [or recognized].”

People hating forecasters for (supposedly) busted forecasts is nothing new but even more surreal for Jafar was when people tried to give him credit for things he didn’t do. “Illiterate people sometimes believe that the forecaster is like the Magic Man [Magician or Witch Doctor]” People want to have faith in him and would testify at meetings “he said the rain would come and it did” or vice versus. Praise be upon him! He’s flattered, but unfortunately he never made any such forecast… It is hard, though, to argue with someone when they are trying to give you credit that you don’t deserve.

The final curse of the forecaster is that, no matter how much people distrust you, they will still be curious about what you have to say. They want to cross reference what you have to say with what they have heard from all the others. Because of Jafar’s celebrity, he practically can’t buy bread without being buttonholed by someone wanting to know his take on what is going to happen. Doctors get much the same thing, they can’t go on a vacation without strangers wanting to show them their rashes and sores, asking for poolside diagnoses.

Where this gets him in trouble is when he gets a call from an official high in the government. When that person wants a forecast (deadline: yesterday), what the official doesn’t realize is that forecasts don’t come out of thin air. If he wants something specific and useful, it takes time to gather data, set up models, analyze results, create products and so on. Whereas some groups have whole offices of people devoted to that, Jafar doesn’t get paid to do this, it’s his passion.

The response when Jafar told the official that he couldn’t give him the outlook unless he got some funding for his forecasting? The official thought Jafar was trying to shake him down for money, saying “Jafar, you’re playing with me.” Jafar lamented, “He thought it was an easy job [setting up and running a forecasting system]. It’s not.”

How is someone like this supposed to make forecasts, without institutional support, external funding or career recognition?

I think his secret is magic.

Posted by Thomas Pagano at 5:28 AM
Email ThisBlogThis!Share to TwitterShare to FacebookShare to Pinterest