Persepolis (the Value of Long-term Records)

With Jafar Nazemosadat as the host, my next stop after Tehran was to give a lecture at the University of Shiraz College of Agriculture about river forecasting. After the talk Jafar, Kitty and I drove out to see Persepolis.

From about 550-330 BC, Persepolis was the capitol of the Persian Empire. This was an empire that extended from Libya to India and is the greatest empire that ever existed in terms of percent of population of the world (44%) being ruled.

Compared to other ancient wonders, an unusual thing about this place was that it wasn’t built with slave labor; documents still exist showing how craftsmen were paid for their work. There is also evidence that they routinely recorded the weather, such as measuring wind direction by watching rising smoke. There were also solar calendars, e.g. they knew it was time to start planting crops when the sunlight passed through two small holes in the wall (think of Indiana Jones with the staff in the temple room when he was trying to find out where the Lost Ark was buried).

Although it was one of the original Seven Wonders of the World, Persepolis sees nowhere near the number of tourists that it used to because of the closure of Iran and the sanctions. When we arrived, we pulled into an empty parking lot. 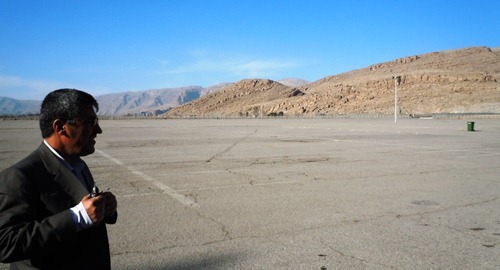 Jafar surveys a distant garbage can in the parking lot

The site is a large complex of building foundations and remnants of columns. You need several hours to get around the whole place.

Jafar and I on the hill above Persepolis.

Tribute for the King was brought from afar to Persepolis. Delegates walked through the buildings and were meant to be completely overwhelmed by its grandeur. It is a long walk from the grand entrance to the inner chambers and the stairways are lined with intricate carvings. Tribute bearers could see all of the other tribute that has been given, including riches and all sorts of animals. 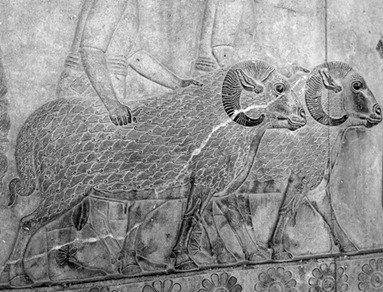 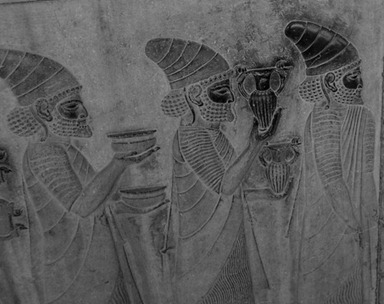 How does your tribute size up?

As outsiders, all we could do is marvel and inarticulately repeat “Wow… wow… wow…”. This does not even include the astonishingly innovative plumbing and sewer system below the site that is largely hidden from view and is not mentioned in the interpretive signs. 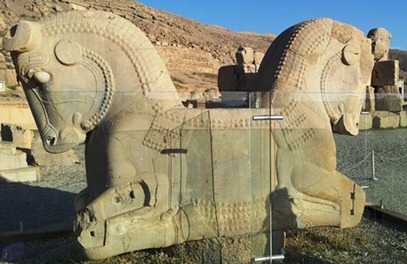 There are a few well preserved sculptures on the grounds such as these animals.

As the afternoon went on, we noticed a drop in Jafar’s usual enthusiasm. As a native Iranian, he has been to the site a number of times and has seen how it changed throughout the years, watching it fall into disrepair.

He noted how all the onsite museums were “temporarily closed”. The phrase “temporarily closed” is always just a good intention, a forecast. In reality, they’re closed until they’re open. No one would ever say “permanently open” because who knows how long that would last?

He said that he was angry and sad that the government’s priorities were elsewhere, that they weren’t taking care of their treasures and their legacy. They had lost sight of the long-term and that the neglect of this site was going to lead to regret eventually.

This wasn’t the first time that something bad happened to this site. For one, Alexander the Great’s army burned it to the ground on conquering it around 330 BC. However, some of the sculptures are covered in English-language graffiti from the previous two centuries. 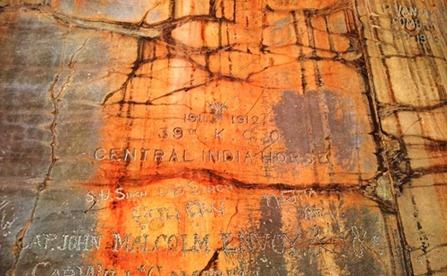 This 1912 carving is from the British Calvary (39th King George’s Own Central India Horse). 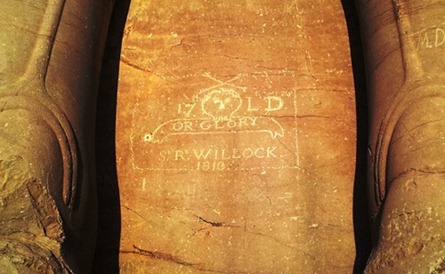 Here’s something from 1810 by S.R. Willock, another representative of the Crown.

Defacing like this can’t be undone. A treasure is preserved until it isn’t. Once it is gone it is gone forever.

It reminded me of the office library at the river forecasting agency I used to work at (NRCS). They have a set of papers nicknamed “The Ancient Scrolls” and they are kept in a special metal bookshelf with a glass door. Some of these are fragile original manuscripts from the pioneers of water supply forecasting, written before the 1940s, some as far back as the 1890s. Even more remarkable is a wall of books containing the complete print archive of the agency’s published forecasts. Many of these documents were marked up in the margins with the original handwriting of the Great Masters like George Clyde, Arch Work or Ralph Parshall (ever hear of a “Parshall flume”?).

My supervisor Phil Pasteris recounted a story that when he was a junior employee, he was ordered to put the papers in the trash because there wasn’t going to be room after the office moved to a new building. Recognizing the value in these things, Phil stashed the documents in unmarked boxes. Shortly after the move, his supervisor retired (“he was a short-timer, anyway”) and Phil brought the old forecasts out of hiding to where they remain today.

When I excitedly showed an old university classmate some of these documents, she instantly understood what she was looking at. Gently handling one of the earliest forecasts issued (in Nevada around 1910), she marveled that “one person could grab this and walk out the door and it would be gone forever. It’s amazing that these things have stayed intact for nearly a hundred years.” We stood in silence for a bit, but then reverently returned the book back to the shelf.

These are just old forecasts and manuscripts however. Do you know what the real national treasures are? Long-term environmental monitoring stations and their data. The NRCS library has a large collection of annual summaries of USGS streamflow records. The summaries are now digital, but recently each of the 50 states would publish volumes with tables of numbers, each as thick as a phone book. The whole US for a single year could take up an entire shelf. However, back in the late 1800s, there were so few stations that the entire country’s streamflow measurements could fit in a single book as compact as your hand.

One day I tried to find the earliest volume of streamflow data in the NRCS’s library. On the inside cover of this book, I was surprised to find a library card of those that had borrowed the volume before me. Some of those names included Tom Maddox Jr (a name that goes deep in the history of the Colorado River…Tom Maddox III, his son, is also a world-famous hydrologist) and Luna Leopold (another famous hydrologist and son of the author of A Sand County Almanac, which is nearly as influential as Rachel Carson’s Silent Spring). The book I held was a one-of-a-kind artifact. I checked to make sure the back page wasn’t signed by Joe DiMaggio.

Some of the stations in that original book are still recording data today. Yet every year the USGS struggles to renew funding to maintain its sites. When the money runs out (maybe because of a budget shortfall in local government), the site must be discontinued and there is an unrecoverable gap in the continuous climate record. The list of threatened and endangered stations that die each year is much longer than the list of those rescued.

It’s the same all over the world, this post describes the breaks in climate records in 100+ year old stations in Iran, or the movement of the oldest station in Nepal. There only needs to be one weak link the chain, someone briefly giving up his duty to protect, neglecting his obligation to past and future generations, for things to be irreparably ruined.

This obligation includes old books in the library and Wonders of the World. 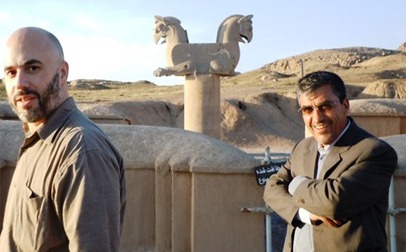 Jafar and I with Persepolis’ Griffin, the mythical guardian of priceless treasures.

Posted by Thomas Pagano at 2:09 PM
Email ThisBlogThis!Share to TwitterShare to FacebookShare to Pinterest