The day after going to Persopolis I gave another lecture at the Shiraz University Civil Engineering Department, hosted by Mohammad Abedini, the head of the department.

Late in the afternoon, Mojtaba Pakparvar, Research Scientist in Soil Physics, graciously took us to some of the other essential sites of Shiraz, such as the tombs of Saadi and Hafez, Iran’s two best known poets. 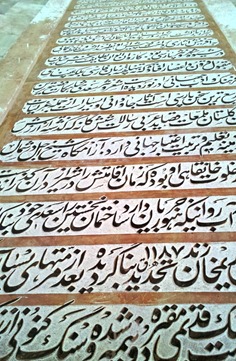 Inscriptions at the Poet’s Tomb

Although they aren’t the most visually stunning places, Iranians completely love going to these tombs. A favorite activity is randomly turning to a page in one of their poetry books and interpreting what is there as being guidance on what to do, a bit like the I-Ching. Near the end of my time in Iran I tried this when I was wondering if we should still go to Cairo despite all the unrest in Egypt. The poem was incomprehensible to me, much like how I imagine Shakespeare reads to foreigners. However, a former literature teacher helped me interpret it as “try not to do business with people that are known to break contracts." Duly noted. 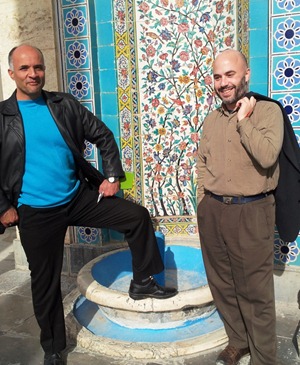 Mojtaba and me imitating the poses of 18 year old tourists

When we asked Mojtaba to read some of writing on the walls, he pleasantly surprised us with pitch-perfect and heartfelt singing of the poem.

We passed through the Bazaar which is a large and primitive version of a shopping mall. It would take you five minutes in this place to realize that the economic sanctions are not working. Maybe things are more expensive than they would be otherwise, but the Bazaar has fifty million copies of everything. Moreover, Iranians shop like it’s a sport. 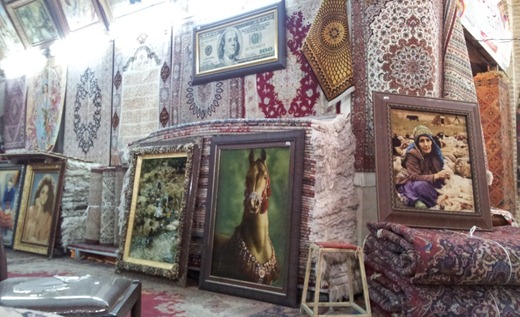 Everything in this picture is a woven carpet, even the framed $100 bill. If you custom order something, it’ll take a year to make. 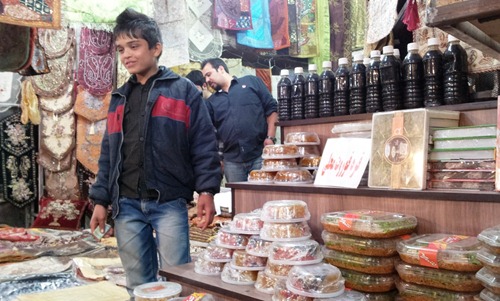 This kid was ready to make a sale. “What you want, mister? Name your price.” Mojtaba treated Kitty to a box of sweets that looked like a book (much like those “gun-hidden-in-a-book” books you see in the murder mystery movies). Now she can pretend to be learning when she’s really snacking. 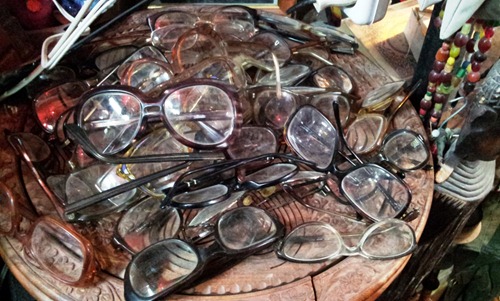 Old eyeglasses. Nearby there was a Gramophone. 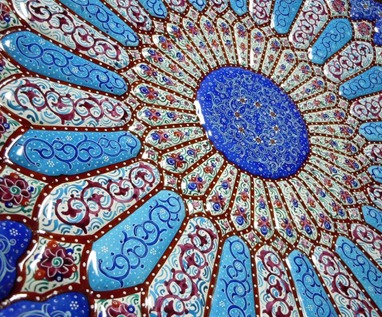 Hand-painted metal plates and vases are a popular and inexpensive specialty of Shiraz.

On leaving the Bazaar, I saw the largest dome I had ever seen on a mosque. I asked “What is that?”

“You don’t know? Oh, that is definitely a must-see.” 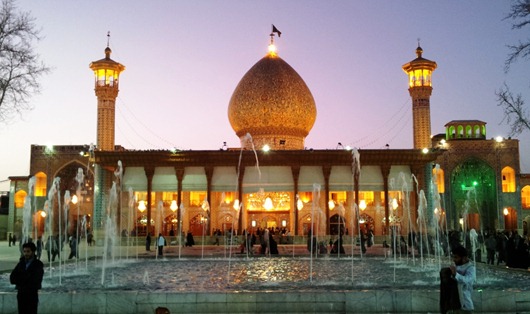 This was the Shah Cheragh, a name that translates into “King of the Light”. It contains tombs of important figures in Shia Islam. Various places of prayer surround an immense courtyard.

It was time for the evening prayer and Mojtaba wanted to go in to pray. Normally, only Muslims are allowed inside, but Mojtaba ferried us in past the guards. The dress code is strict and Kitty wasn’t liking having to wear the flowery bedsheet they loaned her. We turned in our shoes and the men and women separated into different entrances of the mosque. 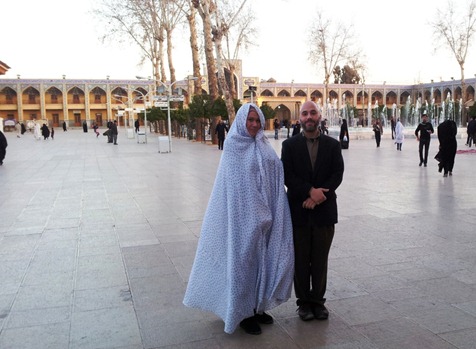 Kitty in her rental Chador and me. 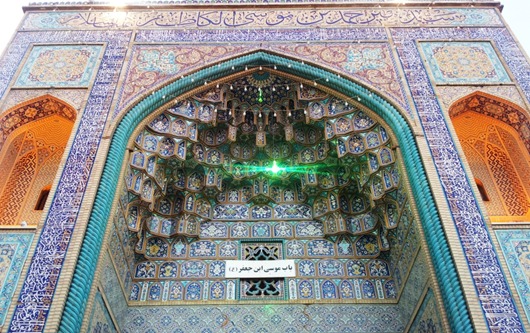 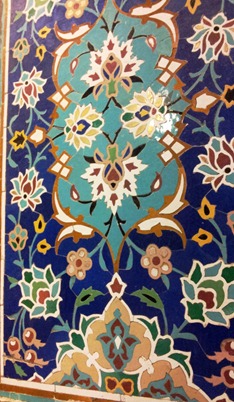 Detail of the inlaid mosaics 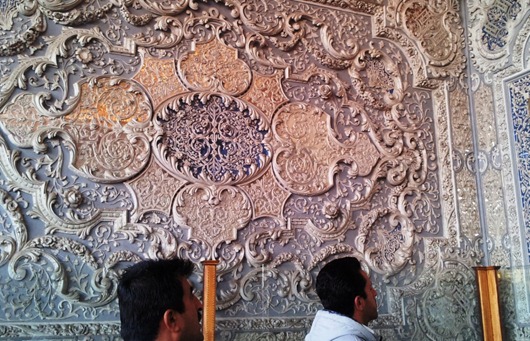 Inside, the walls and ceiling were decorated with intricate colored glass and mirrors. Every part of the floor was covered with thick Persian carpets. Many men were engaged in solemn rituals of personal prayer, but otherwise no one was talking and the room was hushed.

No pictures are allowed inside, so here are photos of another minor shrine in a similar style in another part of the city (the Hamza Shrine). The two don’t really compare when it comes to size and brilliance, but it gives you a flavor of what Shiraz’s style of mirrored mosques. 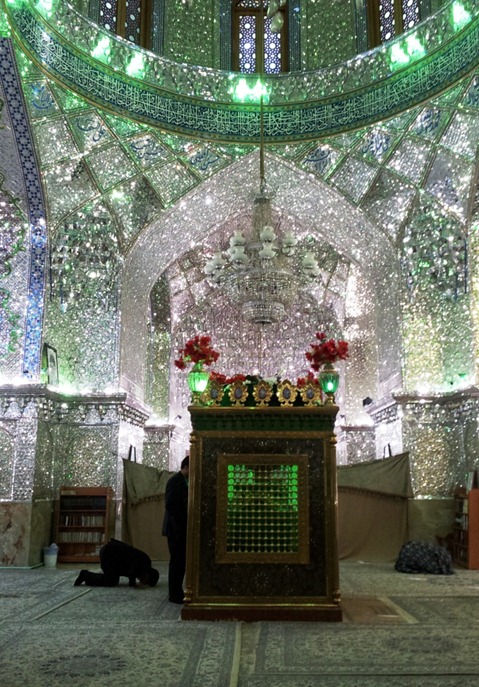 The center item is a tomb. The curtain at the back separates men from women. 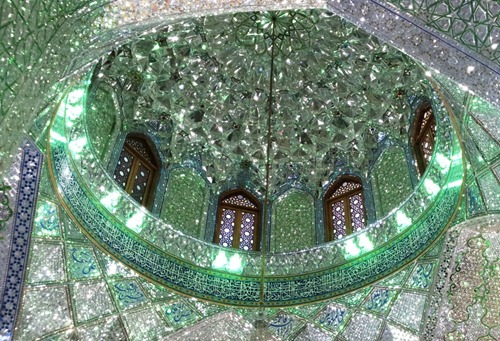 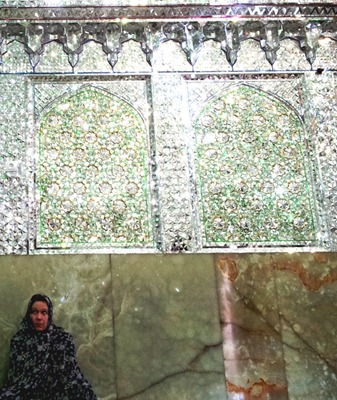 I have tried unsuccessfully to describe how moving of an experience it was to be in the Mosque. Coming from a religious family, I have been to more churches and cathedrals than I can remember and have toured many incense-filled temples throughout Asia. Usually these sites are grim and cold. Shah Cheragh was resplendent and gave off an ecstatic feel, in the true sense of the word. I was completely humbled. 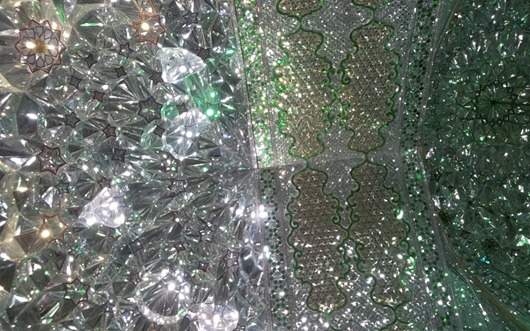 It is easy to forget where you are or what you are looking at. It was transcendental.

In a way, looking into the mirrors reminded me of what it is like to be a scientist. My image was being reflected in the mirrors. They were angled in different ways so that it was not obviously clear what I was looking at. 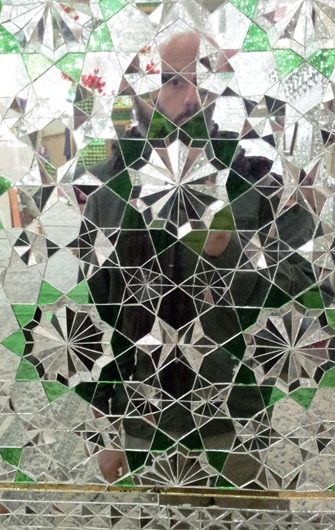 Perhaps there is one true reality, but I will never get a clear reflection of it. Some parts may be easy to figure out but other parts are completely obscure. There can be many different perspectives and no one ever sees exactly what anyone else does. Moreover, I’m the observer and I see what I want (or hope) to see, but it takes discipline and self-awareness to recognize illusions. Discovering the truth requires moving away from familiar stances, getting new perspectives and then making sense of the connections between old and new information. Sometimes it’s even fine to take a break from reducing and deducing to bask in the glorious complexity and splendor of the mirrors themselves. Just don’t think that the dazzling complexity is all there is. 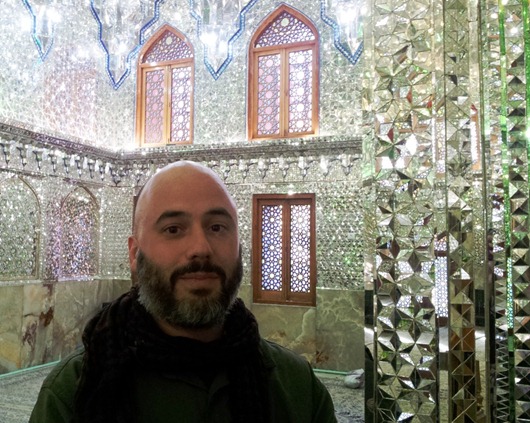 In the main hall of the Mosque there is a small alcove of marble with a step down as if into a wellspring. In the other room is an elevated platform chair. When I asked Mojtaba about it he said that sermons and teachings are given from the platform (called a minbar) but actual worship is by standing in the well (a mijrab). Some mirjabs have soil in the bottom. Worshipers face the mirjab, which also points in the direction of Mecca, the holy city. All prayers, even those done in hotel rooms, face Mecca (hotels have signs on the ceiling showing which way to face).

In Islam, the spiritual leader is not a king or superior of the worshipers, but instead is a servant. Standing in the well (the lowest point in the room) is symbolism that the leader is always respectful of his followers. Christianity has altars and pulpits that are raised but I had never heard of a priest going lower than the congregation when it is time to engage in the most serious form of prayer.

It reminded me of the relationship between a streamgage and its catchment. Water from across the landscape flows downhill and collects at a point on the river. It is a place of respectful awe of what goes on upstream. That point is a truthful reflection of everything that has happened above it. At the same time, when all these events and states of being are collected and focused, the result is unlike anything that can be found elsewhere in the catchment (i.e. the river is often largest, widest, deepest, etc. at its most downstream point).

There was also something about how the mijrab is meant to protect the leader from flying arrows (i.e. assassination attempts) while he’s praying. Apparently that happens often enough to be concerned. I couldn’t verify that story, but I had recently read Lesley Hazelton’s description of the the assassination of the Caliph Omar, stabbed six times as he bent down for morning prayer in the mosque. [The book, “After the Prophet” is narrative non-fiction about the events that led to the Shia-Sunni split in Islam- it’s an enjoyable and informative read, a total page-turner].

We have reached many famous destinations this year, but my favorite part of travel is being left speechless by a place that I never knew existed. I knew that Shiraz was a place we would have to come back to.

Posted by Thomas Pagano at 5:19 AM
Email ThisBlogThis!Share to TwitterShare to FacebookShare to Pinterest