Dust gets into everything here, literally and figuratively. Nearly all the cars look as if they just came from off-roading. The car wash business must make a killing. When I tried to clean our dormitory windows to get a better view, I realized there was a layer of dust on the inside. According to one of the speakers, 70% of days in Ahwaz have unhealthy dust levels. 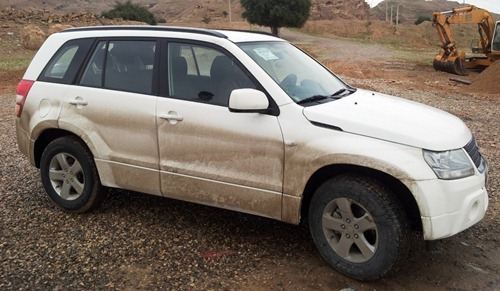 I woke on the first morning with a scratchy throat and smelled like I had slept by a campfire. Apparently this wasn’t even one of the bad days, this being February and all. Ahwaz’s typical daytime high temperature is more than 100 F (38 C) five months of the year. 120 F (50 C) is not rare. The summer heat is oppressive and the high humidity is suffocating (because Ahwaz is less than an hour drive from the Persian Gulf).

A good amount of the pollution comes from local industry and cars, but according to some of the researchers I met, 90% of the dust comes from abroad, especially Iraq, which itself was only about 40 miles away. While Iran has many homegrown challenges, this seems to be another of those problems that has been brought to it from faraway and causes daily suffering for ordinary citizens. 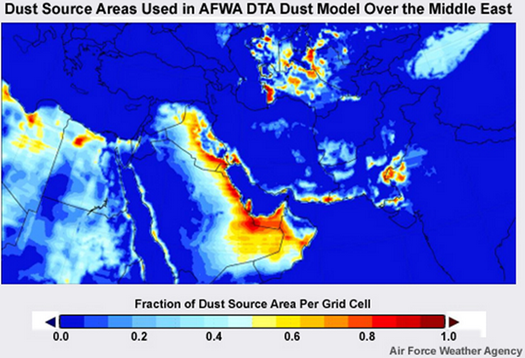 Iran is in the center of this picture. Red areas are those that produce dust according to the US Air Force Weather Agency. Ahwaz is in southwest Iran, near the dark red areas above the north tip of the Persian Gulf. The source for this image, the COMET education page, has all you would ever want to know about the meteorology of dust. Registration at COMET is free.

As seems the typical Persian way, the conference organizers overwhelmed us with hospitality. On the way to the meeting hall, our motorcade scraped over speed bumps because we had so many escorts and handlers. The conference itself was a major production, with flower arrangements, red carpets (literally) and each session introduced by someone I was told was a television celebrity. The science talks started late because a number of high-level politicians and other government officials showed up unexpectedly and were given time at the podium. 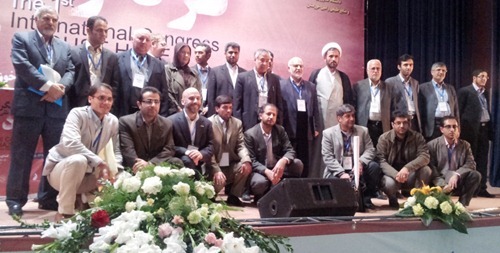 Dignitaries at the dust conference.

The conference was filmed and I gave interviews with the media. During the opening ceremonies, video of the speakers and participants were projected onto large screens. Kitty was disappointed that she and our translator (Fazel) had miscoordinated part of our schedule; when some of the times for events (that we were going to miss) were announced, she playfully rolled her eyes at Fazel and acted upset, only to discover that she was live on camera and her reaction was being displayed 15 feet tall. When she talked to the cameraman later, he said “I was told to focus on you because you are our distinguished and honored guests”. Personally, I’m not sure I like the person Kitty becomes when she’s on the Jumbotron. 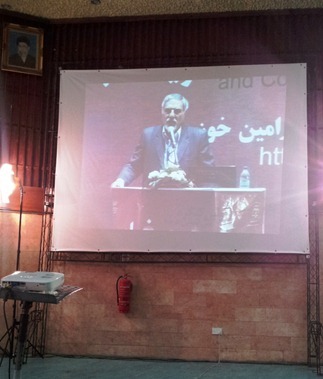 Our host, M. Amin Asoodar of the Agricultural Engineering facility of Ramin University, on the big screen 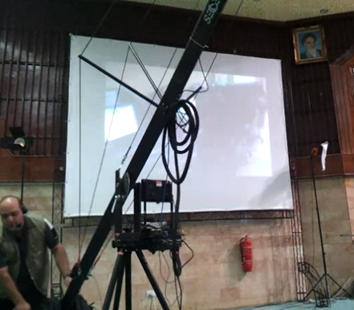 Camera crane operator prepares to zoom in on Kitty

Part of the conference was translated into another language and we could listen in on headsets. Simultaneous translation is seriously challenging, and it is especially mind-bending if the material is technical. There were long stretches of silence in the headphones and the translator later told me that it was just too difficult to translate things like the lyrics of the songs that were sung. There was also no point in trying to translate references and imagery that are particular to Persian culture or involved alliteration or wordplay. Translation is also rarely simultaneous, so we might have been looking at one slide while hearing about what was presented a few slides ago. 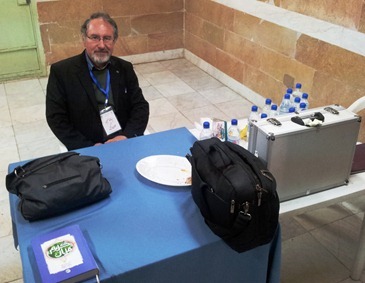 The translator at his workstation backstage

Immediately before my presentation was a talk about the impacts of humans on the environment, especially impacts on the atmosphere. I was mostly going over my notes, but would occasionally look up to see some English words on a slide that was otherwise entirely in Farsi. Some eyebrow-raising English words included “HAARP”, “California”, “Woodpecker”, “Thermobaric bombs”, “Afghanistan” and “Kosovo”. Weirdly enough, I was almost able to follow the thread, having listened to Art Bell’s paranormal radio show throughout grad school.

HAARP is a military research program and a high powered radio transmitter in Alaska, trying to send radiation into the upper atmosphere; it has been described as a “magnet for conspiracy theorists”, blamed for all kinds of natural disasters, but also thought to be an attempt at mind control. The bombs part might have been about how people have thought about using explosions in the air to redirect weather patterns. The discussion of war might have included something about America’s use of white phosphorous and depleted uranium which are kind-of-sort-of chemical weapons (maybe). I don’t know what woodpeckers have to do with anything. [… some googling later, it turns out that Woodpecker was the Soviet equivalent of HAARP, another “psychotronic” device that shot mind control beams during the Cold War].

I think it’s unfair to criticize someone else’s talk when they wouldn’t have a chance to defend themselves online (which is why I don’t include the speaker’s name), but I mention it because I’m fascinated by the social science/social psychology of weather modification and how people form their opinions about it. Also a few students asked for my reaction to what they thought was a strange talk in an otherwise normal set of presentations. 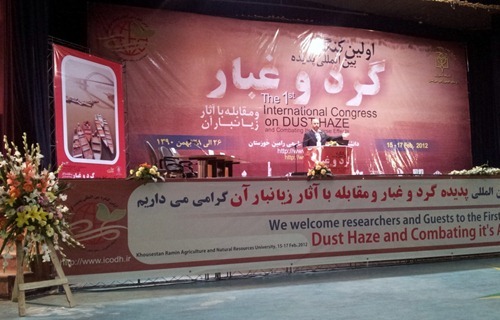 I present about operational hydrology and its parallels with dust forecasting

Posted by Thomas Pagano at 5:00 AM
Email ThisBlogThis!Share to TwitterShare to FacebookShare to Pinterest