US Drought Impacts: From Power to Popcorn

Last week I met Andreas Weigel, a climate analyst with Cargill (a multinational food producing and processing company) and when I asked him about the drought, the response was an animated mix of awe and fear. With droughts causing failures in both the Russian and US harvests, all eyes are trained on the rainfall in Brazil. The Russian drought cost 1.2 billion dollars in agriculture losses and the impacts in the US will be several times that. Just the uninsured damage to cracking house foundations is on the order of 1 billion dollars. 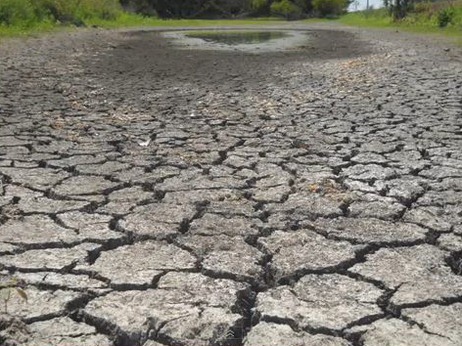 A parched gulch in Missouri

Weigel was at the European Center for Medium Range Weather Forecasts seminar on seasonal forecasting, along with the top scientists and other analysts (from energy companies, banks and relief agencies, among others). The skill of the weeks-to-months ahead forecasts is modest, but even the slightest signal can help with planning or give a competitive advantage.

It is hard to declare victory for this year’s forecasts (indeed Climate Central highlights their failures: “the sea surface temperature pattern “would suggest drought,” but … forecasters completely missed the scale and scope of the disaster that has been unfolding during the past few months.”)

How bad is it? The drought maps leak red like the US has taken a slug to the gut. By some measures (e.g. area-wise) it’s the largest US drought in 50 years. It has been described as a “silent tsunami” sweeping across the country.

Map of drought over the US

What’s remarkable about drought is that it is so hard to picture. It is more about something not happening (the eerie silence of the grain processing plants, the stunted size of the crops), than something happening (torrents of water tumbling cars down a channel). It’s a creeping disaster that is easy to deny and slow to recover from. The fingers of the drought’s influence are likely touching your life, even overseas.

Some have said that there could be a shortage of popcorn. It is not like there will be empty shelves, but the quality will be lower and it will be more expensive. That said, popcorn has one of the highest markups of any product on the market. There are pennies worth of corn in a tub of movie popcorn- the box costs more than the product. Even then, what has ten times the markup of popcorn? Bottled water.

The rise in the price of corn will have a trickle down effect, perhaps making your monthly grocery bill about 20-30% more expensive. This will be magnified even further when it comes to prices of meat (because corn is used as animal feed). Right now farmers are selling off their animals in record numbers in anticipation of not being able to afford to feed them. The result is a lower price of meat in the short term because the supply is high, but the price will shoot up when those supplies run out.

The other major impact will be in energy production and prices. John Daly has some analysis at oilprice.com. From that article:

“virtually all power plants, whether they are nuclear, coal, or natural gas-fired, are completely dependent on water for cooling. Hydroelectric plants require continuous water flow to operate their turbines. Given the drought, many facilities are overheating and utilities are shutting them down or running their plants at lower capacity. Few Americans know (or up to this point have cared) that the country’s power plants account for about half of all the water used in the United States. For every gallon of residential water used in the average U.S. household, five times more is used to provide that home with electricity via hydropower turbines and fossil fuel power plants, roughly 40,000 gallons each month.”

“”In summer you often get a double whammy. People want their air-conditioning and drought gets worse. You have more demand for electricity and less water available to produce it. That is what we are seeing in the Midwest right now, power plants on the edge”… In July U.S. nuclear-power production hit its lowest seasonal levels in nine years as drought and heat forced Nuclear power plants from Ohio to Vermont to slow output.”

Posted by Thomas Pagano at 1:13 PM
Email ThisBlogThis!Share to TwitterShare to FacebookShare to Pinterest