An Earthquake Made the River Rise

When I think of earthquakes and rivers, I imagine the scene in the Superman movie where Lex Luthor’s bomb sets off an earthquake and ruptures Hoover Dam. 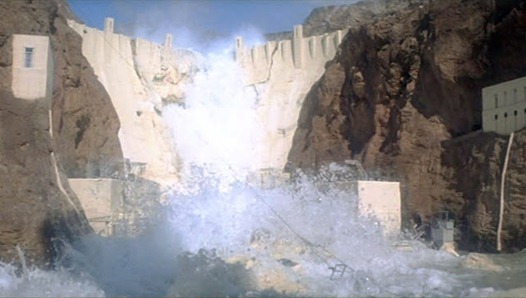 Dambreak scene from the 1978 Superman Movie.

Natural disasters can cause problems with the cracking of structures, but earthquake-induced total failures of dams are relatively rare. That said, there are accounts of earthquakes happening after the construction of dams. Large lakes filling put new stresses on the landscape until conditions reach a breaking point. The filling of Lake Mead/Hoover Dam caused earthquakes. As you can imagine, there are karmic cases of large dams causing large quakes that damage the dams themselves (e.g. Hsinfengkiang in China in 1962, and at Koyna, in India in 1967).

More interesting are the effects that earthquakes have on the natural flow of rivers, some of which can be long lasting. About 10 years ago, scientists Montgomery and Manga collected examples of earthquakes changing the water levels in wells and rivers. They found “Detectable streamflow changes occur in areas within tens to hundreds of kilometers of the epicenter, whereas changes in groundwater levels in wells can occur hundreds to thousands of kilometers from earthquake epicenters.” Manga also helped write a book chapter on changes in rivers after earthquakes and highlighted the case of a 1989 California earthquake that made rivers come up from 4 to 24 times their original size for a period lasting weeks to months.

In 2010 the colossal magnitude 8.8 earthquake happened in Chile. According to studies published this summer, initially the river levels dropped but then, hours to days later, the rivers as much as quadrupled their original size. The shaking of the soils redistributed the groundwater up towards the surface and fairly soon plants started accessing this water for transpiration causing a larger fluctuation in the river between night and day.

There are also short-lasting (i.e. minutes to hours) dramatic changes in river flow. In 1812, the Mississippi River ran backwards following a magnitude 7 quake in 1812. Boatmen were jolted awake in the middle of the night to find themselves being washed upstream “at the speed of the swiftest horse” and having to hold onto their hats to keep them from flying off. There were accounts of sudden large holes opening in mid-river as much as 10 meters/33 feet deep with water spilling vertically into them.

Posted by Thomas Pagano at 1:57 PM
Email ThisBlogThis!Share to TwitterShare to FacebookShare to Pinterest