The announcement about the fall of Libya’s hottest temperature record got me remembering about some adventure climatology I did a few years ago in Australia. I wanted to find the exact hottest spot in the city on the hottest day of the year. Can you guess where it was and how hot it was? Here are some excerpts from 2 events. First, infamous Black Saturday (7 February 2009). At the time, few realized the extent of the wildfires going on around Melbourne but we could see plumes of smoke from our apartment and had ash on our windows:

At the height of the heat at about 3:40pm I grabbed my personal thermometer and ran outside to see if I could find the hottest surface temperature (the "skin" temperature, the surface of the ground as opposed to the air temperature a couple feet off the ground which is what you see above) around our neighborhood.

In grad school in Arizona we would run out and see if we could fry an egg on the sidewalk on the hottest day of the year. Turns out you can't. Sidewalks aren't that hot, you need something like an motor oil stained manhole cover or the metal hood of a black car. Even then the best you can get is over-easy, a little less than totally runny.

There's so many clichés about heat... But they were all true, when I walked out into the 5% humidity and 50 km/hr winds, it was like being blasted in the face by a pizza oven wrapped in a sauna nestled in a box of hair dryers... on a tin roof... in Hades... with the heat on. Anyhow my thermometer is made to measure liquids so it wasn't quite designed for the task, but here's the best I could do today... 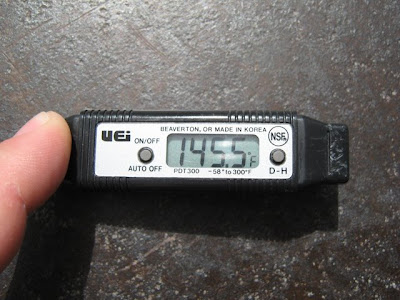 145.5 F/63 C. Hot damn! It was right outside our door actually, in front of a construction site, it's a large thick metal slab out in the street and the hottest temperatures were right in the middle. Later on I started to think I could do even better on some of the tram tracks going down the middle of Toorak Street... but then a confused policeman came along and rousted me.

Later on we had blackouts in our apartment. And Christine remarked that this might be the first time she hasn't felt cold. But the heat was over in 10 minutes, as you can see when the winds and my first showers came through.”

Today looked like it was going to be a scorcher, so this morning I called in sick with a terrible "cold". Right around 4:30 when it appeared like the airport temperature had reached its peak (110 F, 43C), I donned my cashmere wool overcoat and hat and set out.

First stop was the tram rails at Chapel and Toorak. In theory, a great spot, but I think I'm going to give up on this one. I only had the thermometer down for half a minute before the cars at the stoplight started to honk. 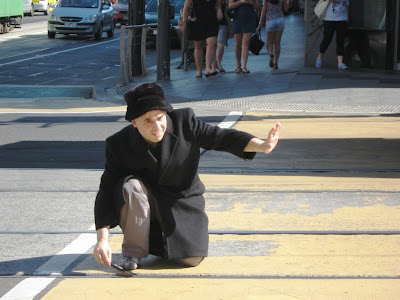 Where the construction site was last year, there's a skyscraper now. On the first floor is the Outpost Cafe, a high end coffee place that has a fancy contraption that makes a cup of coffee, one drip at a time over about 4 hours. 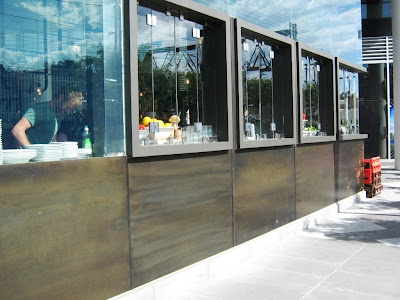 Those black metal plates below the windows were just about perfect and they had been facing the sun all day. As I got closer I saw that a couple flies had foolishly landed on the wall and were burnt to a crisp on the spot!

And the verdict is... 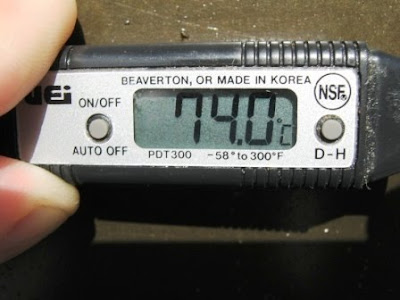 Posted by Thomas Pagano at 6:56 AM
Email ThisBlogThis!Share to TwitterShare to FacebookShare to Pinterest