Dead Heat: The Toppling of the World’s Hottest Temperature Record

Last week forecaster Jan Null sent out an announcement about how Death Valley has moved up into the top spot of (officially recorded) hottest place on earth:

The World Meteorological Organization (WMO) has stripped Libya of their world hottest temperature record; set at El Azizia on September 13, 1922. The “new” world record hottest temperature is now the 134 set at Greenland Ranch in Death Valley, CA on July 13, 1913. Here’s the Press Release. It was the tireless efforts of Chris Burt, author of Extreme Weather and the Weather Historian for Weather Underground, that helped spur the [World Meteorological Organization] to reexamine and ultimately delete the El Azizia record. 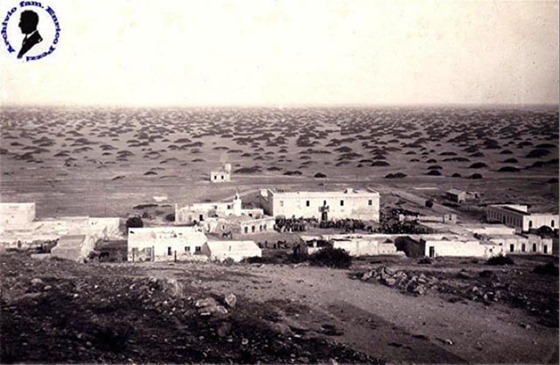 A photograph of the trading post at El Azizia, Libya taken in 1923

The old record fell because it was on old-style thermometer (even by 1922 standards) and was likely misread by a new observer on his second day at work. It was a hot day, but the record did not seem plausible when compared to other nearby stations reporting at the same time.

Chris Burt has an interesting blog with personal accounts and original investigation into this and other weather extremes. The blog includes a compelling 25 minute detective story documentary about the El Azizia record with dramatic accounts of the disappearance of the Libyan chief climatologist during last year’s revolution. There are also announcements in USA Today and Reuters.

Note that this record is for the hottest official air temperature recorded by a thermometer. There are measurements of the exact hottest place on earth (70 C/160 F surface temperature in the Lut Desert outside Kerman, Iran) but that is of the temperature of the ground as sensed by a satellite. Read more about my trip to that Iranian desert and its vast hand-dug underground canals.

Posted by Thomas Pagano at 6:36 AM
Email ThisBlogThis!Share to TwitterShare to FacebookShare to Pinterest