The Pit in the Stomach Feeling

I thought this description of the emotional challenge of forecasting was good. It came from a story of the forecasters that tracked tornadoes causing nearly unprecedented damages across the US this year. This included the highest number of tornado fatalities since official records began. Joplin, the town mentioned, had 20 minutes warning of the impending disaster. 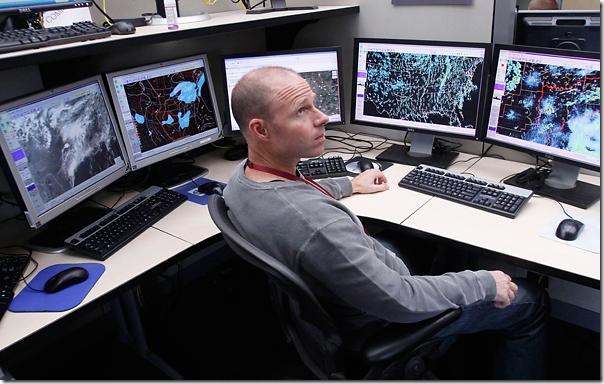 Original caption: In this April 26 photo, Mark Darrow, a meteorologist at the National Weather Service's Storm Prediction Center, talks with a colleague as he sits at his desk in the center in Norman, Okla. Despite knowing for days that tornadoes are coming, there's a certain helplessness that hits weather forecasters when funnels descend and a "pit of the stomach" feeling when the death toll rises.


His office was receiving damage reports within five minutes of the Joplin tornado touching down, he says.


"It's one of those things where there is undoubtedly that pit in the stomach feeling," Boxell says. "At the same time, the storm is still ongoing, and so while it's really, really hard to hear about everything, we almost have to disconnect for a moment and focus on the science and radar."


Boxell says it's later — usually a day or two after, when assessing the tornado's damage — that the magnitude of the devastation sets in for many.


"It's surreal in some cases. It was without a doubt the hardest on those who did the initial surveys the first day," he said.
Posted by Thomas Pagano at 5:10 PM
Email ThisBlogThis!Share to TwitterShare to FacebookShare to Pinterest