The Climate Monitoring Network is Full of Holes

While consolidating some old hard drives I found this picture from when I was doing fieldwork in Utah.

This was what was called a "decoy raingage". Like most other raingages out there, rain falls in the central tube and collects at the bottom. The vertical metal strips all around it are the wind shield. Without the wind shield, light fluffy things like snow would fall into the gauge and then blow back out. The strips calm the wind around the opening at the top, so the snow can just fall straight in. Without the strips, you would underestimate the amount of precipitation that had actually fallen, which is a bad thing. 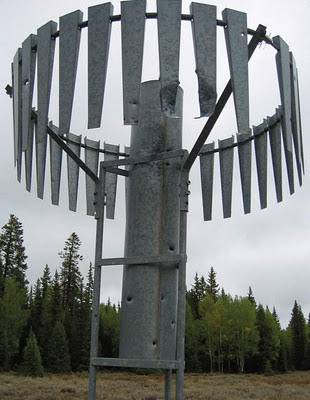 The downside is that these stripes make great targets for shooting practice. Someone with a gun and good aim could send them whizzing around like a carnival game. It is the same with shiny solar panels. As you can see, this gauge has about 11 bullet holes. This gauge now probably underestimates, but for a different reason.

When I was a forecaster, I could always tell when hunting season started in the woods. Data collection spots, as dots on my computer screen, would flicker out with a silent scream as they were hunted down one by one.

Vandalism is has been a serious issue for as long as anyone can remember and people have tried many ways to deter it. I mentioned earlier that this was a decoy site. It is not hooked into anything. The real measurement site is hidden in the woods in the background. This one is just so people can get their shooting fix in.

Putting a large sign "Property of the US Federal Government" only seems to invite more harm. What did someone tell me was the most effective? Using a sign with a large American flag instead. Nobody messes with "Ol' Glory."
Posted by Thomas Pagano at 12:24 PM
Email ThisBlogThis!Share to TwitterShare to FacebookShare to Pinterest