From The Forecasting Floor (Western US Water Supply Outlooks)

[Here is a note from Tom Perkins, Team Leader of Water and Climate Services. His group makes seasonal water supply outlooks for the Western US, primarily based on snowpack measured in the mountains. I asked him to describe how the hydrologists were doing in the run-up to the release of the January 1st river forecasts. Here is a look inside the US Department of Agriculture's National Resources Conservation Service's National Water and Climate Center:]

It’s time for the January 1st water supply forecasts to roll out the electronic door. Making the first forecasts of the year (our last forecast was in June) always involves changes and challenges and this year is no different. There’s a Russian saying “the first pancake is a lump”- it means that it is hard to get things perfect the first time. This month will turn out fine, we just need to try extra hard at it.

We have four forecasters and they divide up the Western US roughly as, North, East, South and West, each being responsible for major river basins. We make our forecasts and then discuss them with the National Weather Service (NWS) and then issue joint official numbers in a national publication.

There is heightened interest in theMissouri Basin because of the catastrophic flooding that occurred over last spring and summer. Our new Senior Hydrologist, Cara McCarthy, will be handling the forecasting duties in that area. After having spent three months evaluating the Army Corps of Engineers’ management of the Missouri last year, she knows the basin hydrology and politics very well.


The Columbia Basin hydrologist Rashawn Tama-Sweet will have to learn a new coordination procedure with the NWS Northwest River Forecast Center (NWRFC). It is becoming more of a collaboration process, rather than coordination. Previously the users would access the forecast numbers that both agencies agreed upon. However, in just the past few months the NWRFC will be ushering ina new product that lets people directly see what their River Simulation Modelsare saying. Our agency will still be using our statistical models and publishing a separate set of forecasts. This is a change in the way our agencies have worked together for over 30 years.

To add to the challenge, the NWS Colorado Basin RFC (CBRFC) has decided to express their forecasts in terms of their new 1981-2010 normals (i.e. long-term averages), instead of the 1971-2000 normals being used by all the other RFCs and our agency (the NRCS).  So, even though our volume forecasts are the same, our forecast might be 85% of normal, whereas theirs is 90% of normal, just because our baseline normal is different. Because of this, the NRCS will take over the production of the Westwide forecast table that the CBRFC has traditionally produced. Water users are already calling for the Internet address to access the forecast table. There is lots of interest, but it’s an additional responsibility for us.

This is just the start of it, too. To run our forecast software requires getting the settings and configuration files just right and there are always modifications that need to be made. There’s a new technology for entering data into the database that people have to learn. We have new forecasters and other personnel to train. Some old personnel never seem to learn and inevitably break something or other. Media reporters from local and distant news organizations are suddenly alarmed because there is no snow in certain places this year, whereas last year there was copious amounts of snow. The list is endless. 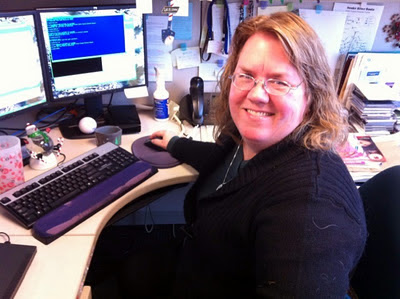 
The finest part of a new forecast season is the renewing of relations with people that have been gone out of our lives for the last six months. We have known and worked with some of these familiar faces since the early 1980s. Yes, we still bicker over 5% here and 10% there when making the forecasts, but in the end, we get the job done and learn to respect each other’s abilities. It’s still a fun job!

Posted by Thomas Pagano at 10:15 AM
Email ThisBlogThis!Share to TwitterShare to FacebookShare to Pinterest