All this done with 5 months of full-time traveling to 9 countries, including hobbling around Southeast Asia on crutches for about a month. I chipped a tooth, lost 10 pounds and nearly had my ear bitten by a monkey. Never say I don't try hard to bring you the best in hydrologic entertainment! 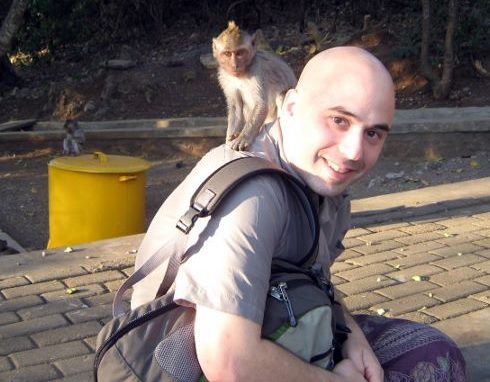 (Seconds after this photo was taken, this little guy tried to peel my head like an orange)

Usually this is the point where I would reminiscence of funny memories (e.g. we thought getting four people in a motorbike-taxi was impressive until we saw five)...

Or remember strange quotes (e.g. "The guide said that our safety plan is: If lava comes flying at you, run away… run backwards, however, so you can dodge the lava as it comes at you")…

Or advice I would give me a year ago (e.g. “Without local contacts, you have nothing")…

But compared to a year ago, the thing that is most different now is the sheer number of wild animal encounters we’ve had. CSIRO’s site in Highett doubled as a nature preserve so I would occasionally see something trot by the office or fly into my window, but it is hard to get out into the world with a desk job. 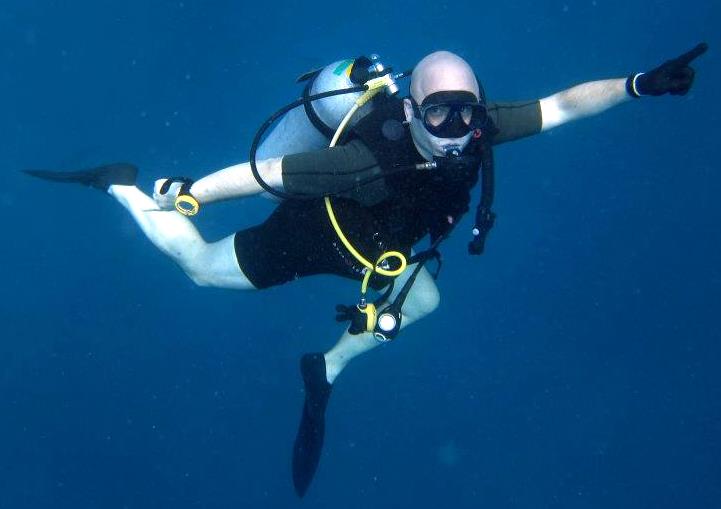 Where I’ve used a photo from the web, I’ve put a link, otherwise the photos are from dives we’ve gone on.

Our first diving spot was in Sulawesi, Indonesia (Bunaken Island and Lembeh Strait). The area is famous for “macro” photography, i.e. small things that are usually camouflaged.

This includes things such as tiny Frog Fish… 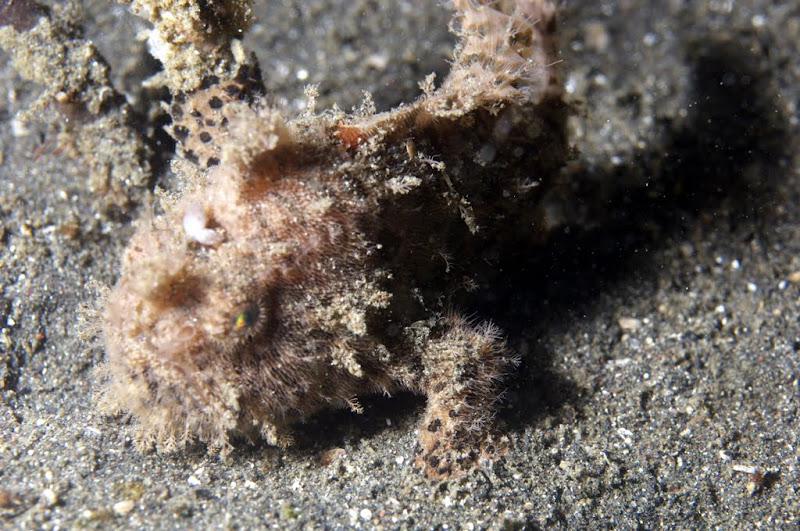 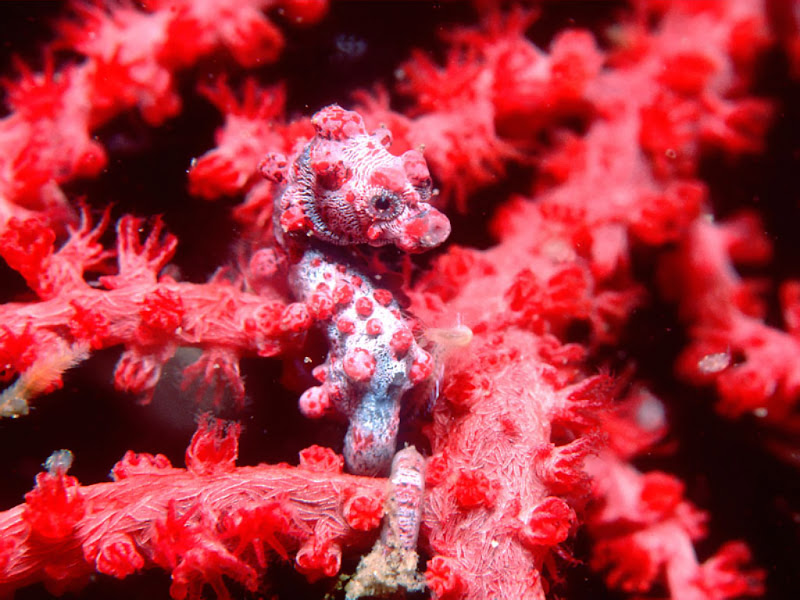 …and one of my favorites, Flamboyant Cuttlefish. They are best appreciated in video because their neon bodies flash and the patterns swirl. 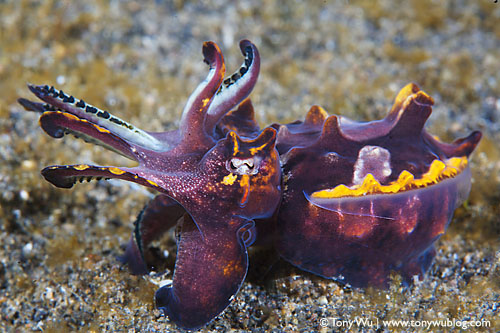 We saw Mandarin Fish mating. They are about 5 cm long and only come out at night. When they mate, one saddles up next to the other and then they swim vertically for about half a meter, wiggling side-by-side. 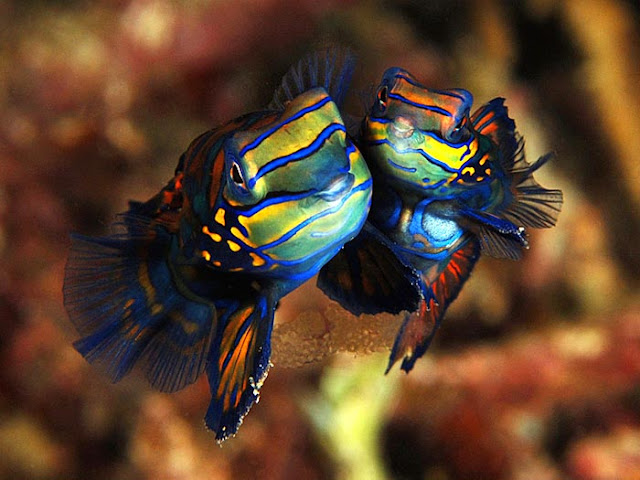 There were Moray Eels of all shapes and sizes everywhere we’ve gone. 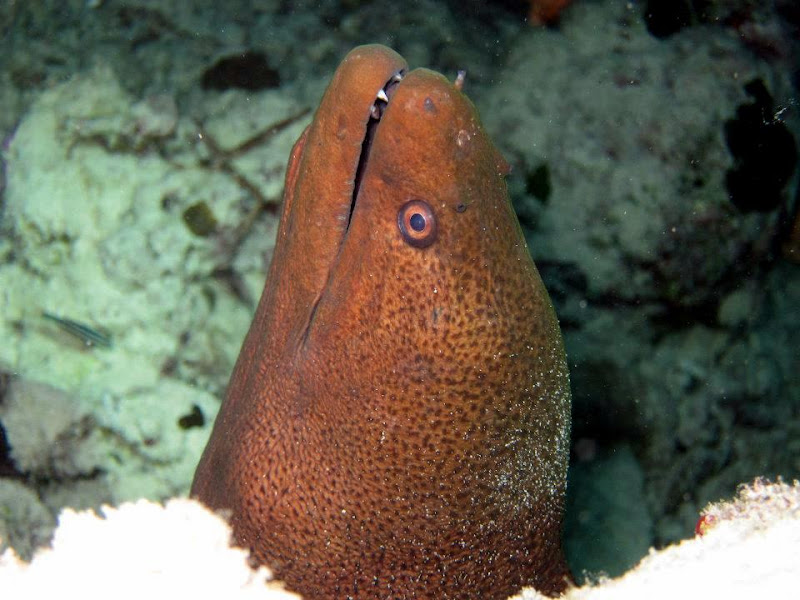 In Sandakan, Malaysia we went to a Giant Sea Turtle hatchery. Sea turtles are like the dopey-eyed Golden Retrievers of the ocean. 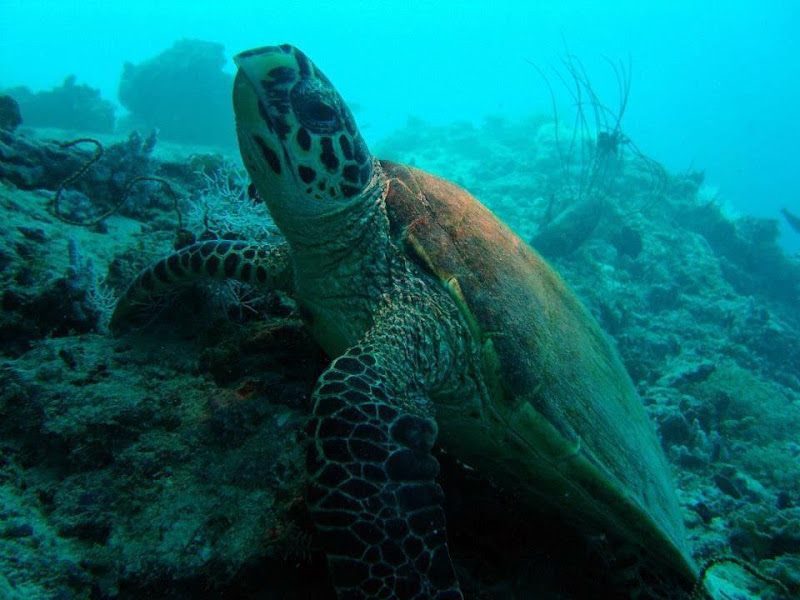 At night you can watch a meter-wide turtle crawl up the beach, dig a hole and drop eggs in the sand. The eggs are collected and put in a nursery. About a hundred 2-cm long hatchlings come out of each hole, are collected in a grocery basket, and set loose on the beach. Nearly all of them are promptly eaten by predators. What the surviving hatchlings do for the next ten years (called “the lost years”) is almost totally unknown to scientists, but then they return to lay eggs again.

It was very interesting to hear how little we know about sea turtles, that for most of their life in the ocean we have very little idea of what they are up to. It seems common that science education displays try to arm visitors with a litany of facts about what is known (e.g. “Sea turtles can live hundreds of years”). Very rarely have I seen discussion about how we know what we know. How would you know a turtle was 200 years old? Ask it? It is most important to show what we don’t know and why, to build support for future research and monitoring. 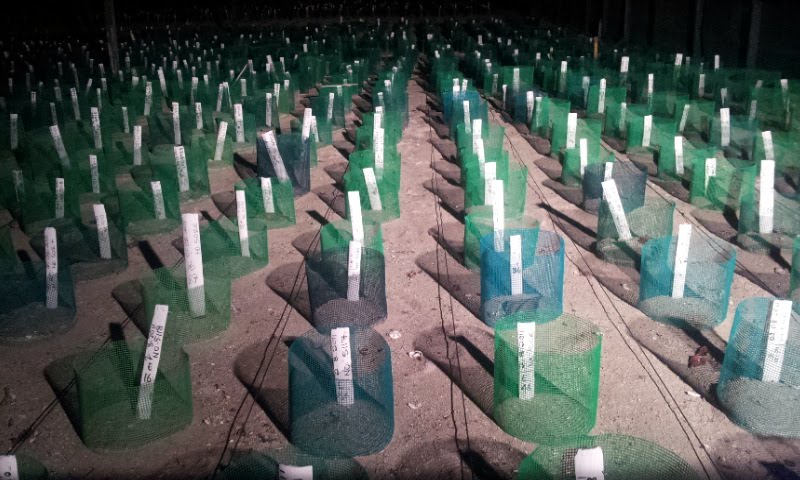 After Turtle Island we went to Sipadan, Malaysia off the east coast of Borneo. Sipadan has unparalleled diversity and abundance of life, in partly because access to it is so tightly controlled. Jacques Cousteau said “I have seen other places like Sipadan, 45 years ago, but now no more. Now we have found an untouched piece of art.”

Sipadan is probably most famous for its “tornadoes” of jack fish and barracuda. This photo is from Layang-Layang which is nearby, but gives an idea of what a jackfish tornado looks like. If you swim into one, all you can see is fish, it is almost hypnotic. 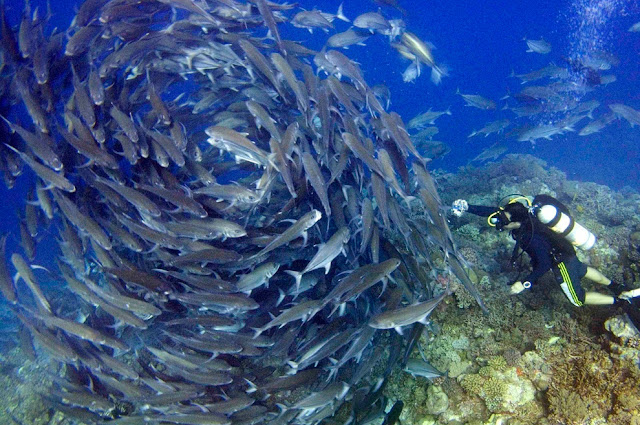 Kitty was lucky enough to see Hammerhead Sharks, which are exceptionally rare, i.e. other people exclaimed “I’ve been coming here for 10 years and have never seen one before”. They are also very shy. This was as close as I got to one (the viewfinder on the left). 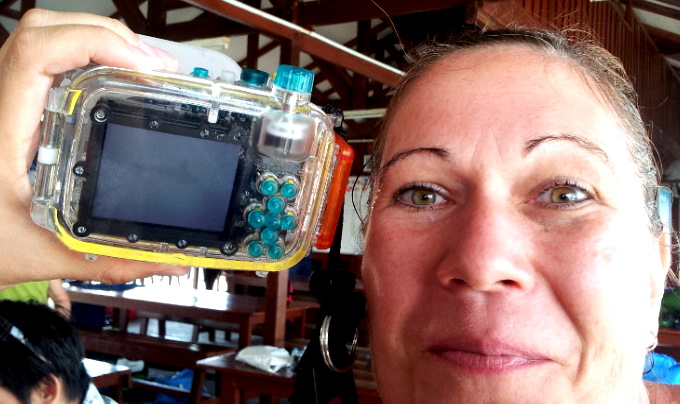 We don’t take underwater photos ourselves, but Sipadan divers are serious about their equipment. This Japanese lady’s equipment was about as big as she was. 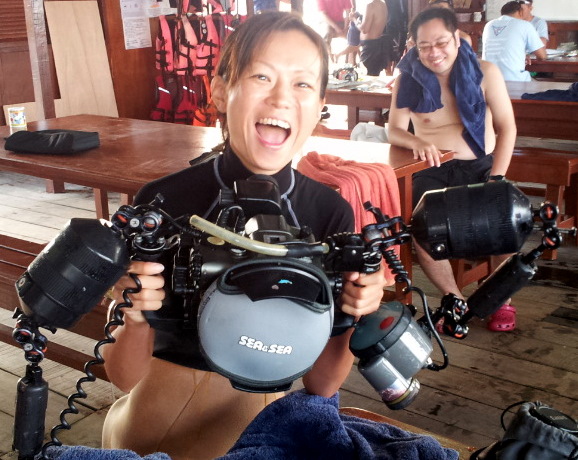 Tomorrow there will be more mysteries from down below…

Posted by Thomas Pagano at 1:38 PM
Email ThisBlogThis!Share to TwitterShare to FacebookShare to Pinterest