When I started searching the web for "strange rivers", I'd frequently find photos of the "dirtiest river in the world" in Jakarta, Indonesia, like such:

I imagined that something like that could only happen if a flooding river eroded the banks and carried away part of a garbage dump (I have seen it happen in Arizona, but that was not nearly as bad as the above).  When I asked what "the dirtiest place" on "the dirtiest river" was, a common item on peoples' lists seemed to be Manggarai.

When we walked over a bridge at another site earlier in the day we started to get a feel for what goes into the river. A girder below the bridge had various bits of trash on it. This was above the high water mark, so it either arrived on a stiff breeze or was tossed there by a passerby. At a places like this you have to shout to be heard over the cars and motorbikes.

Most of the trash is either plastic bags, styrofoam food containers or just unrecognizable yuck. Occasionally something catches the eye and makes the imagination reel. For example, I must wonder who is passing over a bridge (with no sidewalk) and decides to jettison three cooked sets of ramen noodles over the edge? And with such outward force that it lands on the girder 4 meters away?

Here's a close up of the trash racks at the Manggarai gate, itself 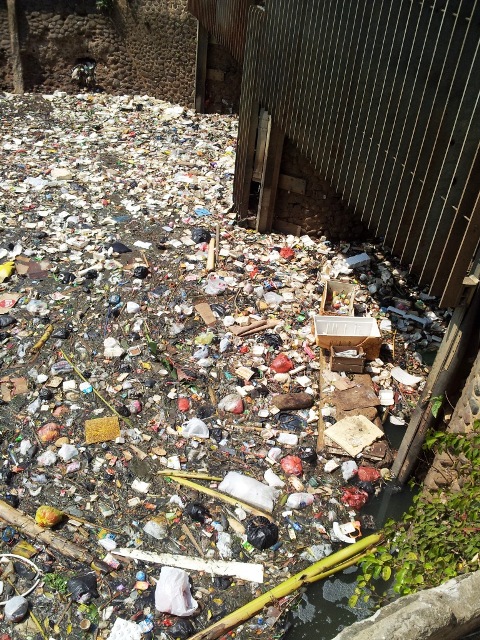 In this view are: A refrigerator without its metal shell (surprisingly many of these around... I don't know where the shells go), yogurt cups, shoes (...every lost shoe has a story...), DVDs, cups, soccer balls, coconuts... 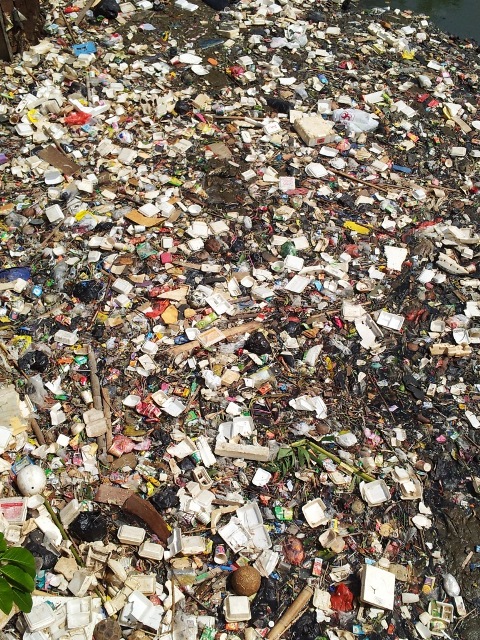 If it weren't so awful, it could be art. 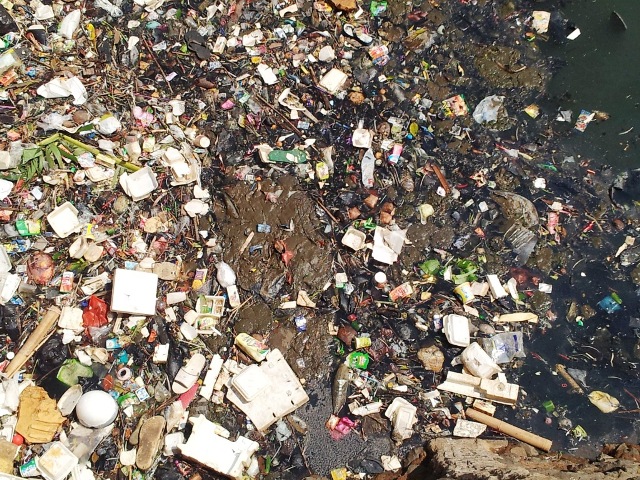 I was inclined to believe that anything brown and floating was feces. I was not quite sure how all the individual poops were able to find eachother and form a floating mat. The water itself was dark gray. It smelled as bad as it looks. Part barnyard, part burning plastic.. like disease on the wind. Despite all this, the occasional catfish came gulping to the surface. 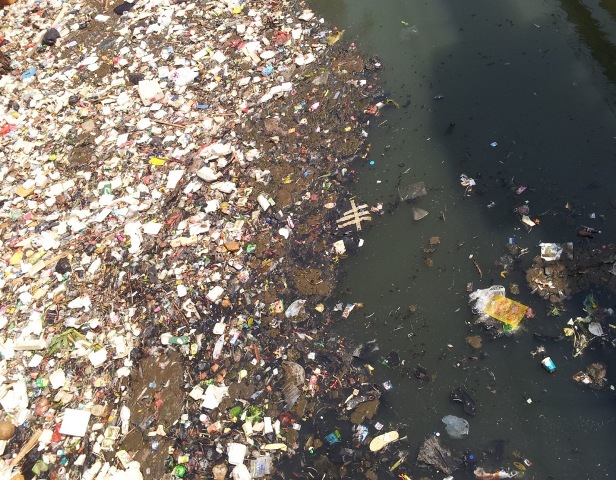 There are several ways that trash gets out of the river. Every couple days, a private company's crane sloshes through the water and scoops things to up on shore. There is a crane operator on-call by SMS in case the garbage builds up too quickly. Apparently it was pretty tame the day we were there because it is easier to keep up with the cleaning during the dry season. 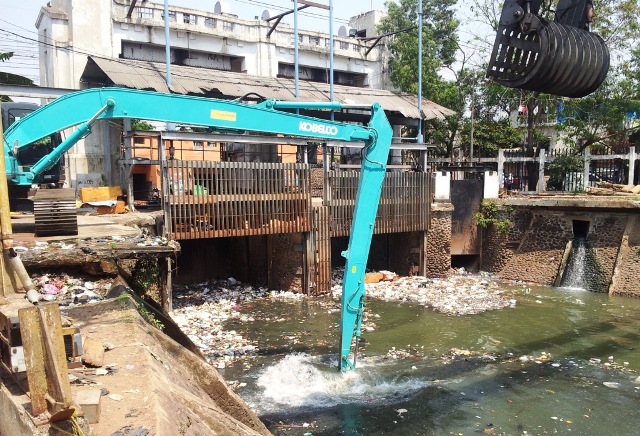 The crane (back right in below) drops the trash on the bank, and it is sorted through and/or hauled away. The water draining out the bottom of this pile is a foul broth. 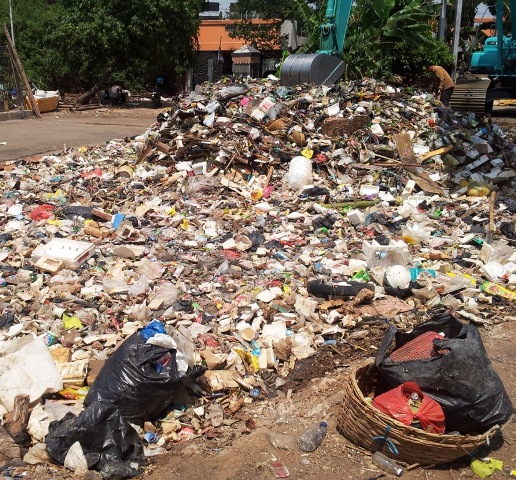 The other way to pull something out of the river is for people to pull it onto bamboo rafts and ferry it to shore. There are many of these elsewhere along the rivers. Here's an example: 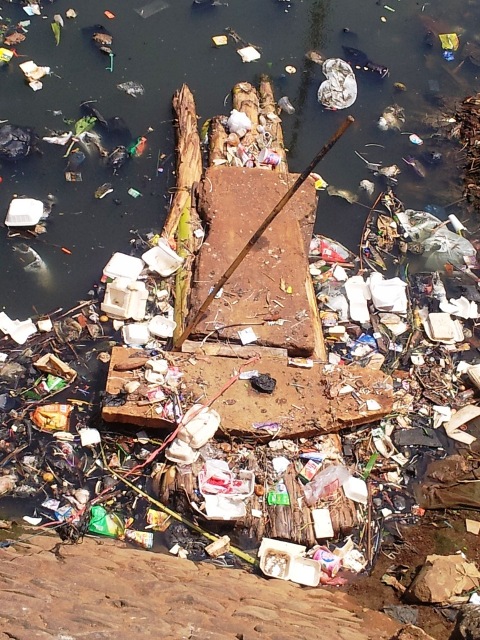 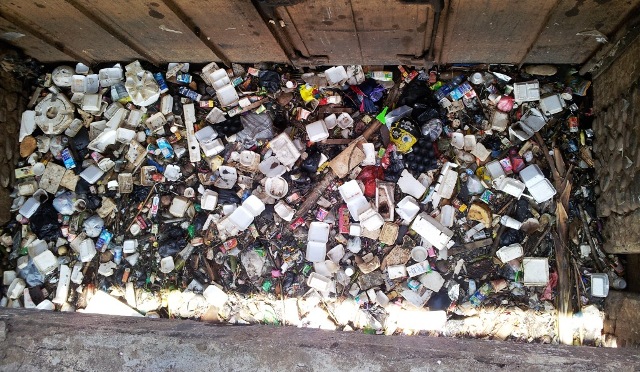 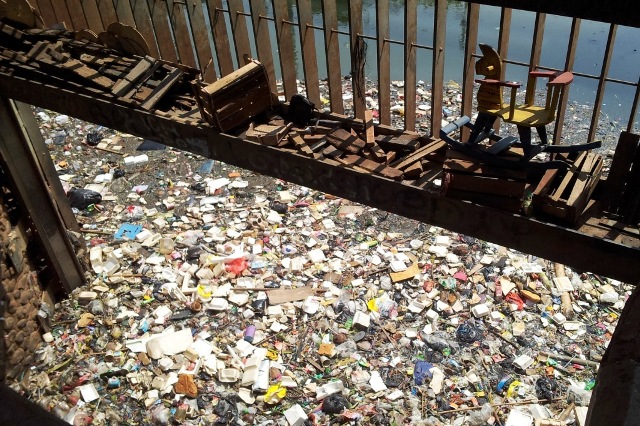 Our guides said that some of the below wood was from flooded homes. It was recovered and would be resold for firewood for those too poor to afford cooking gas or kerosene. 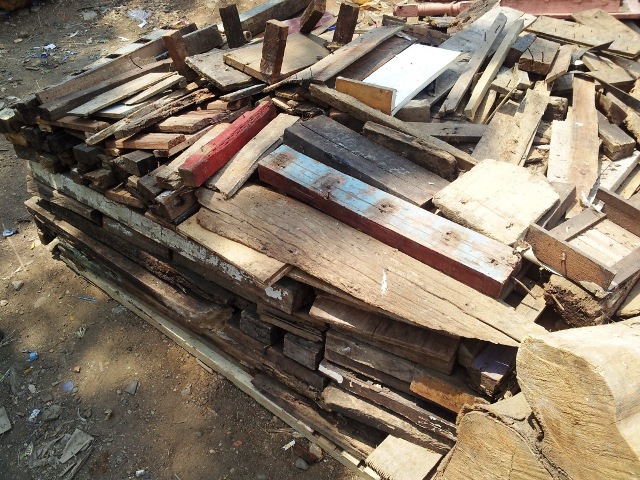 There were mattresses pulled from the river: 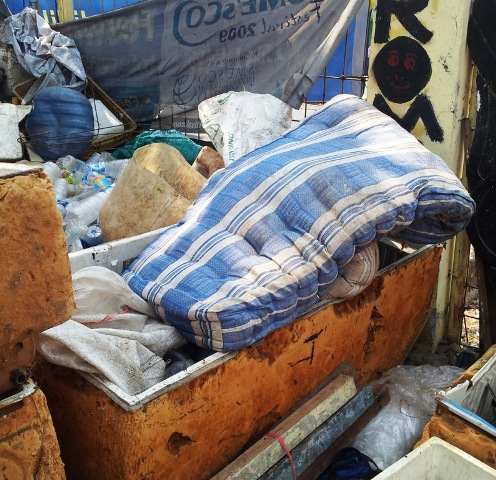 We had some discussion about if they, too, would be resold. The guides thought that likely yes for things like shoes, but probably no for mattresses. I was haunted by the idea of someone (perhaps unknowingly?) buying a mattress pulled from the dirtiest river in the world... but some googling confirms that the company operating the crane considers mattresses non-recyclable.

We climbed to the top of a nearby second gate and looked upstream at the river houses. Actually these are more like apartment complexes than individual houses... 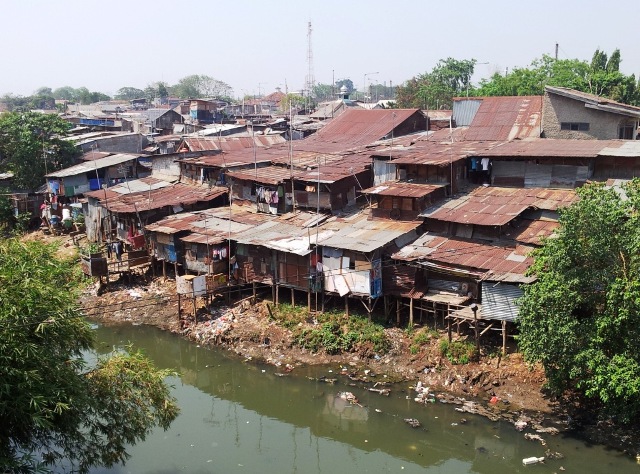 At the back of most houses there is a platform that serves as a toilet that deposits directly into the river. Over the course of a couple minute conversation we saw several people use the latrines (indeed, at one point both latrines in view were seeing action simultaneously). 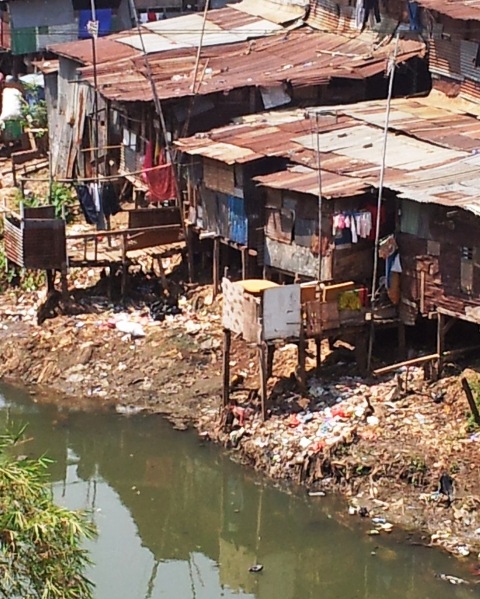 One of the local people with us suggested that there is a culture of throwing trash out the back of houses in Indonesia. No one sees the river from the street, so it is out of sight, out of mind. Maybe we should turn the houses around and put the road by the river instead. As he said this, a lady came out on the platform and threw a plastic bag full of garbage over the railing and into the water. A plastic tub floated by.

Every lost plastic tub has a story...

Posted by Thomas Pagano at 10:15 PM
Email ThisBlogThis!Share to TwitterShare to FacebookShare to Pinterest