The observer at the Ciliwung gate (part 2/2)

He offered a tour of the dam. By this time, the laundry had been removed from the raingage. On closer inspection, it turns out there’s three raingages practically within arm’s reach of eachother. Two agencies transmit their own automated measurements. It’s easier to have two different gages than to try and get the two agencies to share the same data. There’s also a non-automated gage that is read manually.

“How different are the measurements?” Surprisingly different.

“Which one is the best, most accurate?” The manual one, of course.
The streamgage upstream of the dam had manual and automated sensors too. The largest lizard I’ve seen on this trip so far skittled out of the electronics box at the streamgage. Nearby, someone had built a personal levee out into the channel and they were digging out smooth river stones for sale.

We stopped to talk with two old men who lived on the waterfront and asked their experience with the river. I expected him to show where the river came up to his knees during the flood but instead he pointed to marks on the ceiling. He made a point to say that the closing of the irrigation canal during the flood caused water to back up into his house, making things worse for him, even if it helped those downstream.
Even though the old man's house had been flooded repeatedly, he was appreciative of the information and warning he got from Mr Andi. Even though it's easy to view government representatives as the foe, the dam and its observer seemed like a community pillar.
For being an "observer", he seemed to play the game on his toes and not his heels. He said there were volunteer cleanups of the river by the community. People came out of their homes to greet us. Someone on a motorbike (literally) high-fived Mr Andi as he passed. As we were saying goodbyes, there was mention of how he recently got an award for his service.
Here's to hoping that he gets to do more observing than operating in the future 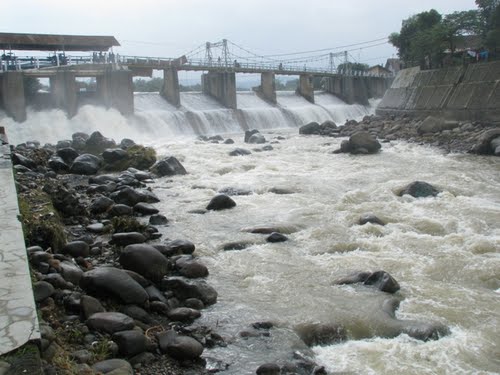 (source)
Posted by Thomas Pagano at 8:11 PM
Email ThisBlogThis!Share to TwitterShare to FacebookShare to Pinterest