It's not every day that you wake up and the weather forecast is for "broken trees". 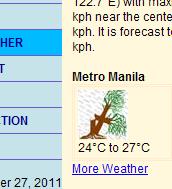 We arrived in Manila, Philippines last night to horizontal blowing rain. On the ride to the hotel, some of the streets were flooded. A Typhoon is bearing down on the northern Philippines. The headline of the newspaper was "100,000 People Evacuated" as it made landfall this morning. This is happening on the two year anniversary of another Typhoon that killed more than 500 people and put 80% of Manila under water. It must feel strange to be unveiling memorial statues in stormy weather.
Here, the winds aren't terribly strong (the trees are bending a bit less than in the icon above), but the rain continued all last night. Against the background of the skyscrapers, the white bands of rain look like a sheer curtain blowing in an open window. The lights have been flickering on and off.

The sense of anticipation is palpable. School was cancelled and government workers stayed home today. I've been hitting refresh on the government's forecast website (PAGASA) every couple minutes (the last update was due at 9 am... another version). Their facebook and twitter feeds have been fairly active. There agency also has some good background information on how flood forecasts are prepared.

Of course, it'll take some time before the rain causes the rivers to rise. How high will the rivers get? It seems we'll find out soon enough...

Posted by Thomas Pagano at 9:45 PM
Email ThisBlogThis!Share to TwitterShare to FacebookShare to Pinterest