Behold! The Manggarai gate, the valve to the heart of Jakarta:
How open or closed it is determines if the Presidential Palace is flooded. It is also one of the dirtiest places in the city, where trash is fished out of the river by the crane-full daily.

Having only 2 million people makes Depok something of a suburb to Jakarta's 10 million. To drive between Depok and Jakarta takes somewhere between a half hour to 28 days, depending on Jakarta's legendary traffic. No doubt, with 1 million people, Bogor is nothing to sniff at either... Bogor's population density is the second highest in the world, nine times as dense as San Francisco. Only Manila is greater as cities go.

Like Katulampa, Manggarai has been around for many years, built by the Dutch before the 1920s. On the wall of the office is a picture of the river from the 1930s: 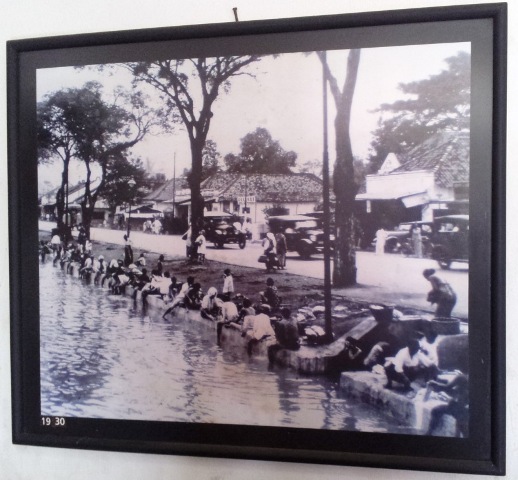 We got a briefing of the emergency procedures that were triggered by various flow levels, similar to (and indeed related to the operations of) Katulampa Dam. 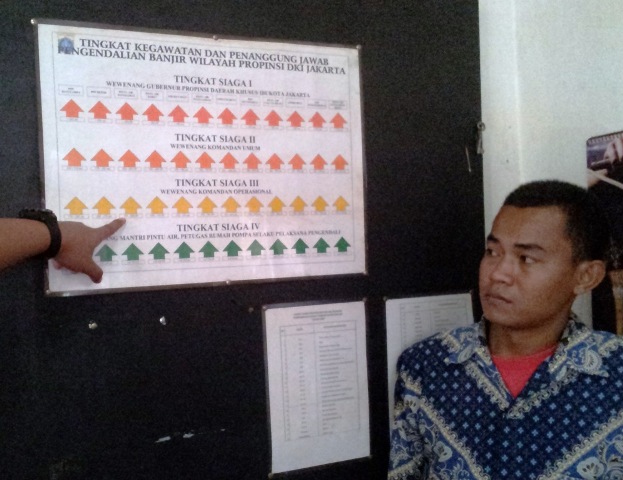 The site saw action in 2007 when the river rose out of its banks to flood part of the control house and the surrounding neighborhood. The high water level left a black stain on some of the buildings and poles around the site and these were labeled (on February 4, 2007, the water level was 1090 centimeters above the reference level, reading "+1090 4-02-07").

Every 15 minutes the employees check the river level and adjust the gate if necessary. During floods, the CB radio and phone ring off the hook. The operator that guided us around, Dian Nur Cahyono, said that one of the tougher parts of his jobs is when local people call or come to the site to argue about how the gate is being operated, sacrificing their neighborhoods to save some others... especially when that "some others" includes the Presidential Palace and relatively upscale neighborhoods. There is no point arguing with the operator, however, it is all Standard Operating Procedure that is ultimately controlled (and can be overridden) by the Governor.


When we asked the operator how he ended up here, he said that he was working in air conditioning and that the local government advertised a job for an expert electrical technician. Before getting the job, he did not fully know what it was about, but now that he works there, he felt pride in doing a public service.

Outside was a rain gauge belonging to BMKG, something like the Indonesian National Weather Service. A palm frond had grown over the gauge likely causing a steady drift in the quality of the measurements. 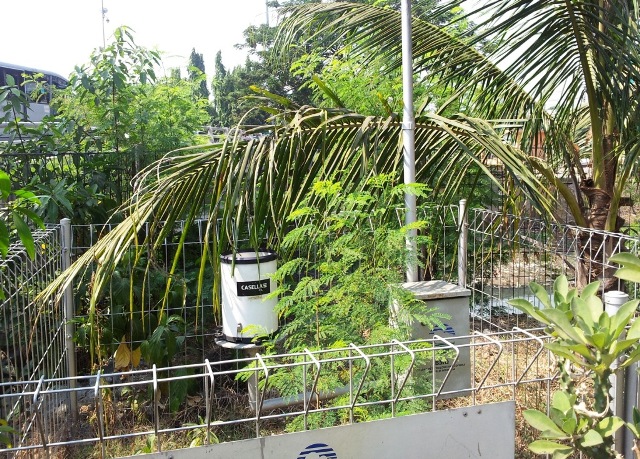 The operators half-joked that they were afraid to maintain the site; a sign warned that entering the enclosure was a crime endangering the public safety that carried a penalty of 12 years imprisonment. Figuring that I was leaving the country soon, I broke the law by doing some pruning. We'll see if I get extradited.


I pity the researcher that is going to discover a sudden shift in the time series record (on 9 September 2011, in case you're reading this, researcher from the future).
At this site, floods only happen a couple times in one's career, but trash is a daily problem. The trash at Manggarai deserves its own post, so that's just what we'll do (tomorrow!).
Posted by Thomas Pagano at 11:03 AM
Email ThisBlogThis!Share to TwitterShare to FacebookShare to Pinterest