Three days ago, my wife’s parents’ home in Colorado Springs was consumed by the Waldo Canyon fire. The news came as a brief note:

“The alarm company just called and the whole house exploded. All of the window alarms went off.”

Within a day, an image was emailed showing the property as a smudge of white ash. 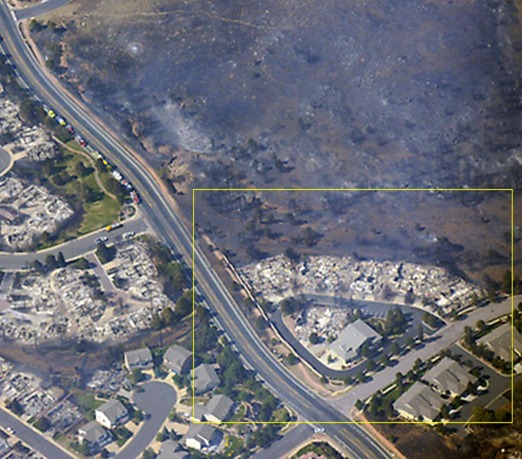 The house was in the upper left of the yellow box

Later it appeared in the middle of a channel 9 video: 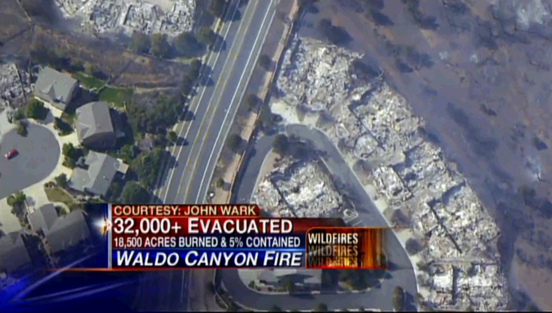 Other video from channel 9 shows homes turning into fireballs at night against the dark silhouette of the mountain:

The reporter describes: “This is really very close to that worst case scenario that so many people in Colorado Springs talked years and years about. This is why people were so adamant talking about mitigation efforts… and that when you have to evacuate, you may have to do it quickly. And that happened for tens of thousands of people today.”

My heart was pounding as I made one last sweep through our little house in Raven Hills. I wondered if my family would ever celebrate another birthday here. I paused at the window where we saw so much wildlife in the woods outside. Where we always put up our Christmas tree.

In the garage, I stopped at the wall where we traced our kids’ profile, measuring their heights to document their growth over the years. I took one last picture of the shark mural in my youngest son’s bedroom, grabbed my oldest boy’s high school letterman’s jacket, took a photo of my daughter at Disney World and began our escape. 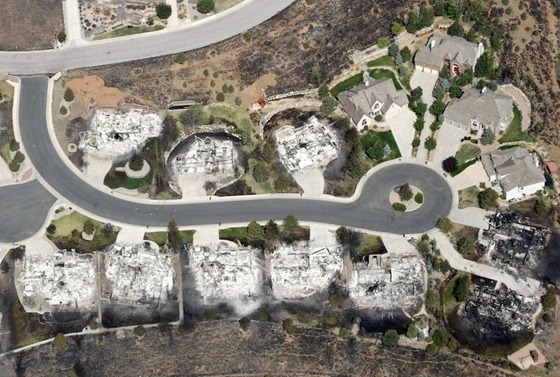 From a gallery of ghosted houses at Buzzfeed

He then witnessed hell in the rearview mirror:

Intersections were blocked by panicked drivers trying to escape. Sirens wailed all around. I felt trapped in a horror movie… I had to go west, toward the flames, to escape. But that route was blocked as well.

Finally, I went into four-wheel-drive, hopped a curb, blasted down a hill, across a soccer field and over a trail to reach Rockrimmon Boulevard where six lanes of traffic were headed east on both sides of the median.

And there I sat in traffic. It’s a memory I’ll never forget. I teared up as I scanned the surrounding cars. Everywhere were children, scared and crying, their parents looking deathly afraid and, in my rearview mirror, a view of the gates of hell. 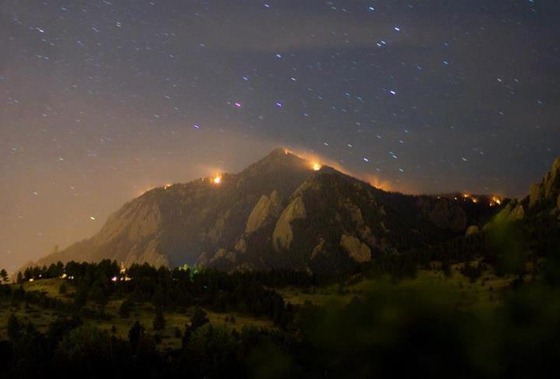 And another friend wrote

That kind of disaster never seems to happen to someone you know, until it does.

Posted by Thomas Pagano at 5:33 AM
Email ThisBlogThis!Share to TwitterShare to FacebookShare to Pinterest