More animals in the streets/The cone of uncertainty

Following on the recent post about a seal running around in Duluth, a twitterer tweeted this photo of an alligator using a crosswalk recently during Tropical Storm Debby in Florida. 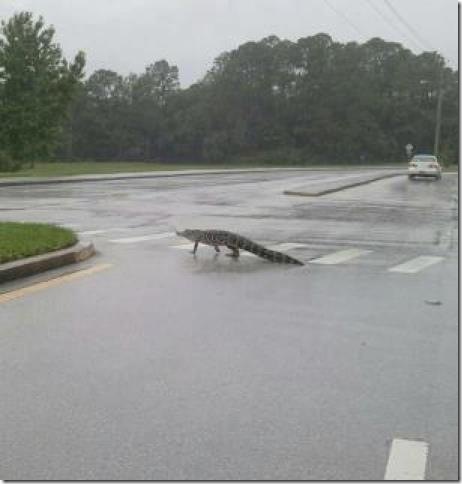 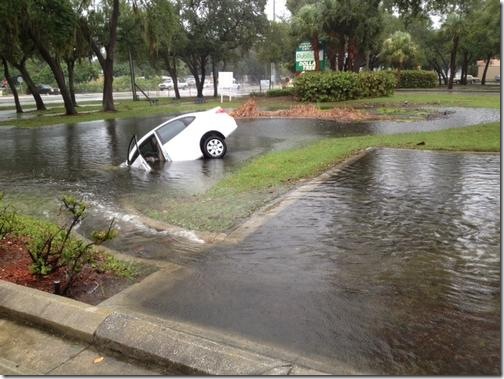 Perhaps the most interesting to me though was to see the hurricane path forecasts of Debby. Here’s South Florida Water Management District’s plot of the computer model guidance from 3 days ago (22 of June 2012):

Each line is the possible track of the eye of the hurricane, as predicted by 15 different forecasting models run by various agencies. Things seem sure for the first 2 days that the storm will head north, but then after that it was anyone’s guess if it would head west to Texas, north or east across Florida.

Here’s the actual path (in purple) with another way of displaying the most recent forecasts (i.e. as a cone of uncertainty, than a spaghetti of possible scenarios).

And then here’s the equivalent spaghetti plot for the most recent model runs:

Notice a tighter clustering of the model runs now, they all head off in the same general path. The important thing to take away from this is that sometimes weather models give confident results with high certainty, but in some situations the results can be all over the map (literally). In theory, sometimes the cone of uncertainty should be narrow, sometimes fat.

Do notice, however that the legend for the graph labels the orange cone “historical std dev [standard deviation]”, a measure of the typical error versus leadtime for all the historical predictions, averaged over a number of years. The width of this cone then, in practice, doesn’t change, even if the forecasters know that a particular situation is more uncertain than another. That said, requiring the forecaster to predict both the center of the cone and its width every time is an extra operational workload, and it’s something that takes extra training to do accurately.

Posted by Thomas Pagano at 6:14 AM
Email ThisBlogThis!Share to TwitterShare to FacebookShare to Pinterest