Measuring streamflow is a type of war [Floodwater spreading part 3]

Later that day we visited where the river’s flow is measured at a four-way intersection. From one spot, three streamgages with cableways can be seen. One measures the total river flow upstream, and two measure where the flow is diverted into the experimental fields (one to the east and one to the west). The fourth option is an overflow channel in case the floods get too large for the project to handle. 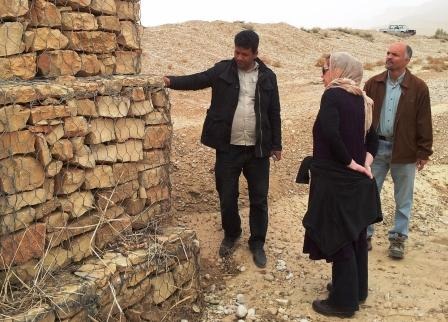 There was no flow in the river when we were there, but debris (e.g. grass and sticks) up on the banks at chest-height suggested some high water had rumbled through here.

There were pools of water left in the river from a flood that had come through five days ago. Ripples in the riverbed showed where there would have been waves. 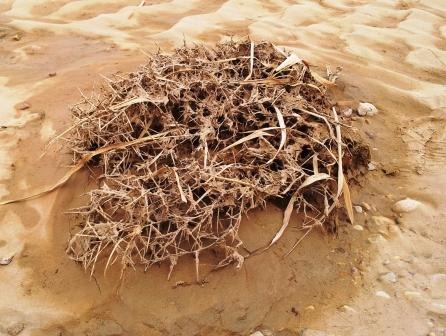 Think you’ve chosen a difficult life? Imagine how the bush that took root in the riverbed feels.

Naturally, where there’s water there’s life and there was lots of evidence of animals going from pool to pool as the water eventually disappeared into the soil. 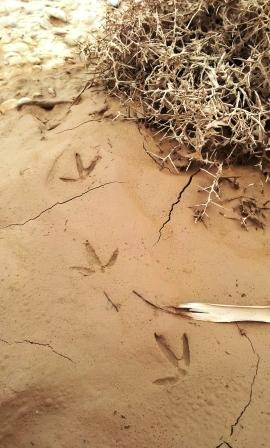 There were fresh footprints of birds… 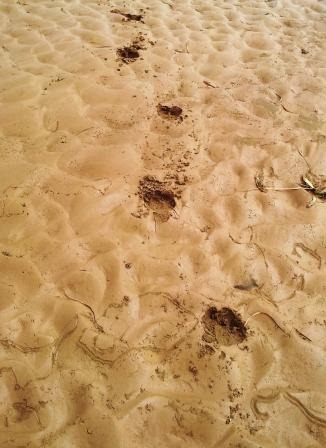 There were also hoofprints, possibly from a wild pig. 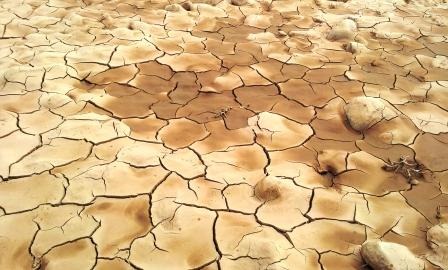 The earth cracks as the soil dries up.

Each streamgage is a tall metal tower out at the end of a concrete walkway. 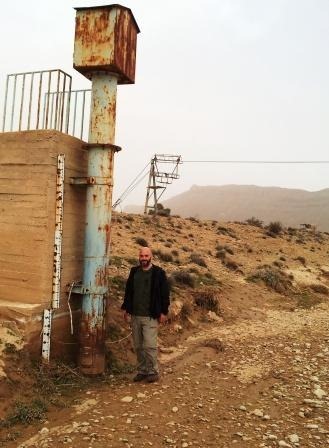 On the right is the automatic streamgage. The tall tube is called a stilling well. On the top is the instrument shelter. The white strip along the side is called a staff gage, marked like a ruler so someone can read how deep the water is. In the background is the cableway. 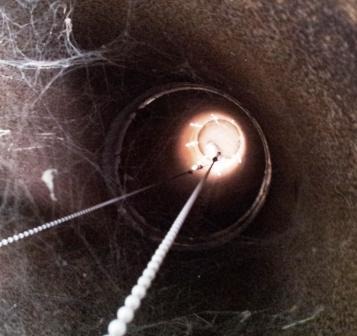 Looking down inside the stilling well. The weight at the bottom is resting on the ground. Watch out for spiders!

As the river rose and fell, so did the bobber and so did a pen marking a line on a rotating drum of graph paper, similar to a seismograph or an EKG. This was an old-school recorder that the technicians had to wind up like a wristwatch to make the drum turn. They tried using a computer (i.e. digital device without paper), but the results weren’t that good. 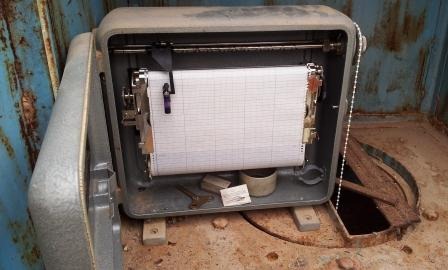 Automatic recorder for measuring flow. The chain on the right turns, rotating a wheel and it moves the pen on the paper back and forth as the river goes up and down. The paper turns at a steady rate, going from one roll to another.

Although there are many techniques for storing and transmitting the data, nearly every automated station measures streamflow in the same way, by measuring the distance from some baseline to the water level surface. This just measures water depth, not actual river flow. Real flow is river area (i.e. depth by width) times flow speed (i.e. how quickly the water is passing by).

Measuring real flow is not easy and must be done by hand. If the river is low enough, technicians wade across the river but otherwise they lower their instruments into the water from a bridge or a cableway. A dozen or more times at different points between one riverbank and the other the technicians use a pole to measure how far the bottom is and then how high the surface is relative to that. Then at different depths (near the surface, half way down, near the bottom, etc) a flow meter measures the water’s speed. Older flow meters looked a bit like pinwheels, but now there are electronic equivalents. 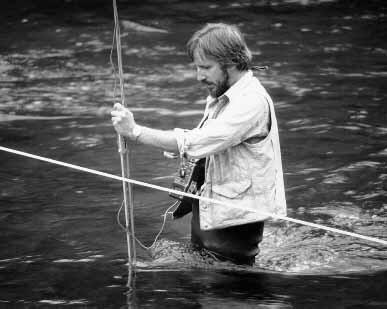 Measuring flow by hand with a current-meter. An underwater device measures flow speed.

Measuring rivers can be dangerous work, especially when the flow is high. In graduate school I was part of a group measuring streamflow below a medium-sized dam. The releases were cranked up in an experiment so we could measure an artificial floodwave passing through. The river had been full of algae and scum and when the flood finally hit, there was pandemonium. Large mats of yuck clogged our instruments and carried away backpacks left onshore. Students struggled to stand in the fast moving flow. One fell, neatly cricking his back over a small boulder. And we weren’t even dangling from the cableway like the professionals do.

But technicians have to supplement the continuous automated depth measurements from the streamgage with occasional manual measurements to figure out the relationship between depth and flow volume. In theory, when a river is deep it should carry more flow volume than when it is shallow. In simple river channels, like concrete-lined canals or the Log Flume at Disneyland, there is a one-to-one relationship between depth and flow, called a “rating curve”. The problem is that in real rivers out in the wild this relationship is always changing, even during a single flood.

When the technician unrolled the streamgage’s paper, the line showed that the river had been dry for quite some time (right of the graph) but then a knee-deep wall of water appeared in a matter of minutes and continued to rise for the next four hours (hours are marked along the bottom, time goes from right to left). Then the line slowly decayed as the river tapered off back to nothing. 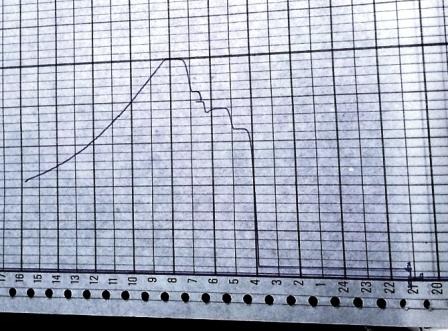 The tale of the tape. The paper record of the recent flood. Before is on the right, after is on the left. A higher line means deeper water.

Then the line stopped.

Because there wasn’t any more flow. The flood was over. They turned off the gage.

But according to the streamgage there was still about a foot of water left. The river had stopped flowing, it was just that the gage was sitting in one of those remnant pools of water. The water depth was dropping because that pool was evaporating and soaking into the ground, not because the flow was getting any smaller. 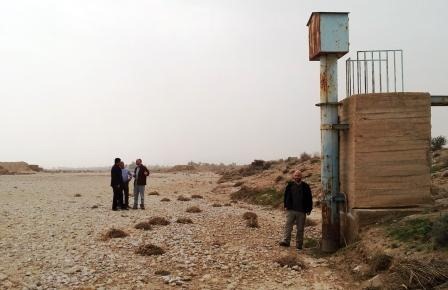 Notice how I have one leg lower than the other. Stagnant water pools around the gage after floods.

So what about the rating curve, what about that relationship between river depth and river flow? “I think for every [flood] event they need a [new] curve. It’s not easy.” said Mojtaba. In other countries, the technicians typically spot-check the river every few weeks or every few months. If the budget is tight, they don’t check it at all. Five days ago, the depth for zero flow changed a foot over the course of a few hours, different from when the river was rising as it was when it was falling.

The could try and fix the problem by moving the whole gage up or down or somewhere else. Already they raised the gage by three feet and moved the gravel around in the riverbed. This makes it hard to compare any new measurements with the old ones though. It’s damned if you do, damned if you don’t, balancing consistency with accuracy. Also, nature is going to do its thing and move the gravel around on its own. The river may even decide to relocate by carving a channel out on the other bank, leaving this gage high and dry, literally.

You fight the river and the river fights you. “[Streamgaging] is a type of war” Mojtaba said. “When there’s rainfall here, the technicians are called out into the showers, to do something ahead of the flood. They are often in danger.” There were stories of them being attacked by dead tree trunks floating down the river. There’s that anticipation that the flood is coming, we gotta prepare, we gotta get our boots on and get out there. Mojtaba paused for a moment before adding “The technicians are our heros”.

Later, one of the technicians showed us how he could throw a stone 55 meters (180 feet) from one bank to the other. It was a running straight arm pitch, like a cricket bowler.

A few months ago I was sitting in my office, trying to figure out if the measurements for a river in Australia were good or bad. If they were bad I would have to come up with my own estimates. The data was particularly erratic when the flow was low. I agonized over if the flow value should be 0.10 or 0.09 or 0.01 or 0.001 or just 0? In reality, it was probably anyone’s guess, plus or minus.

“We should arrange for you to meet Dr Kowsar so you can talk to him in person”. Kowsar was the charismatic leader of the experimental station beginning in the 1980s. He was a legend among hydrologists and Mojtaba was going to arrange for me to visit Kowsar in his home the night before I would have to leave the country.

Posted by Thomas Pagano at 11:29 AM
Email ThisBlogThis!Share to TwitterShare to FacebookShare to Pinterest