Note: The International Center on Qanats and Historic Hydraulic Structures mentioned in the post below was funded by UNESCO (the United Nations Educational, Scientific and Cultural Organization). In October 2011, the US government cut off all funding for UNESCO (22% of the budget). This was because the agency voted to recognize Palestine at the same level as other member states. This triggered a 1990 law that caused the US to immediately stop payments to all UNESCO’s programs. UNESCO has a whole host of water-related programs from Tsunami early warning systems to famine relief. The agency also deals many fields of science from outer space to climate change. Even then, science is only one third of the name, education and culture being the other parts. Watch a very funny Daily Show segment about the issue here (including the second part).

At the very least, today you got a great Scrabble word: qanat (pronounced like “can not”). If you have a Q and no U, it’s one of only 33 possible words to play (qanats, plural, is also Scrabble legal). A qanat is a long horizontal tunnel driven into the side of a mountain. It gathers up the water that would be flowing underground and directs it towards faraway cities and farms. It’s like a well but horizontal, and there’s no pumping or energy required, the water just drains out on its own. 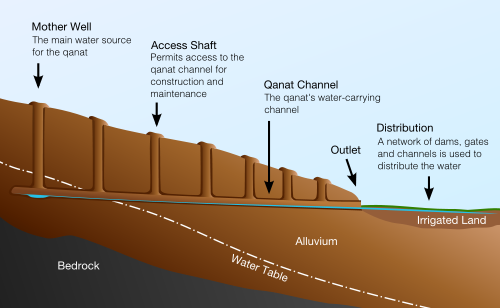 Cross section of a qanat. Water flows in from the left, drains out to the right.

Romans built their aqueducts around 2000 years ago to move water around; the Persians (Iranians) were doing much the same except the Persians were doing it underground and without slave labor. Some ancient Roman aqueducts are still being used and the same goes for qanats.

I saw my first qanat in Yazd, Iran while presenting at the First International Conference on Traditional Water Management in February. The purpose of the conference was to see if ancient cultures had any practices or solutions that would be relevant to modern water problems. I shared the Aboriginal Australian experience using material from Bradley Moggridge, CSIRO’s traditional water expert. The conference was sponsored by the UNESCO International Center on Qanats and Historic Hydraulic Structures (ICQHS) in Yazd. 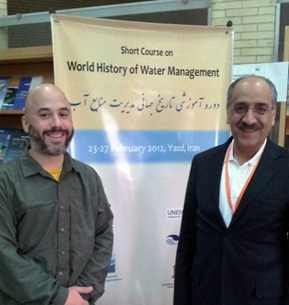 With the UNESCO qanat center’s director A A Semsar Yazdi.

Strangely enough, I met a panel of qanat practitioners even before seeing a qanat in person. There was a panel discussion of them at the water management conference. They dig the tunnels and maintain them, and manage the water as it needs to be delivered to users.

I spent most of the session listening, while looking at the hands of one practitioner. His hands reminded me of those on ranchers I had known in Arizona; leathered and cracked, broad, pressed flat from punching cattle through the desert mountains. Hands like these only come from hard work outdoors. Me? I chew my nails because of nerves but that’s about it. 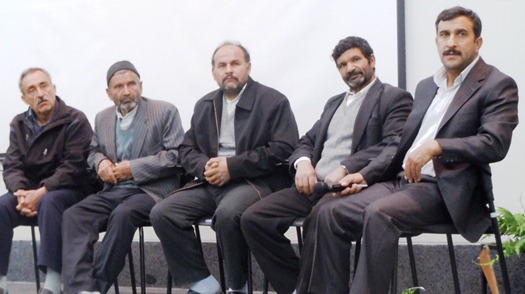 The practitioners described how some things had changed in the 2000 year history of qanats. Oil lamps have been replaced by electric lamps, now they use modern fiber ropes, use power tools, drive around in trucks, and so on. But the work still involved a lot of time with a pick axe moving dirt underground.

I don’t think I could have designed a more dangerous profession. These human moles wear white so they can be seen in the otherwise pitch-dark tunnels; their tunics double as burial shrouds in case they should be killed underground. Name another job where you would go to work in your funeral clothes. 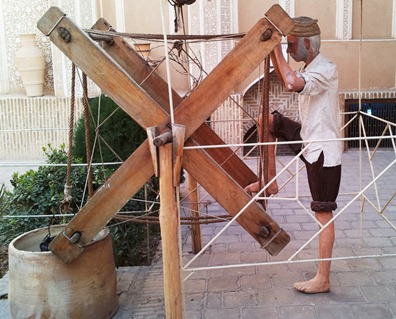 Model of hand-powered crane (windlass) to bring water and dirt out of qanat tunnels. The person climbs on the rungs and it pulls the bucket up.

From Francesca de Chatel’s book “Water Sheiks and Dam Builders”: Besides the danger of falling rocks and collapsing tunnels, they also risk drowning in sudden surging floodwaters [once the tunnels puncture the water table] and suffocating in the narrow spaces- no wonder that in Iran the qanat has been nicknamed “The murderer”.

The next day we went on a field trip to visit qanats out in the desert. As we drove the hour out of Yazd towards Meybod, the landscape got emptier and emptier. A couple hours in the other direction was the exact hottest place on earth (70 C/160 F surface temperature in the Lut Desert outside Kerman). 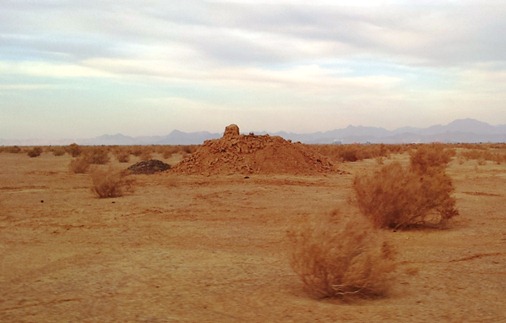 This is a fairly common scene outside Iran’s cities. Notice how the bushes are in rows, planted to control erosion and sandstorms

When we arrived in the middle of nowhere (a phrase I’ll now use much more sparingly after seeing just how far you can get from everything in Iran), the only landscape feature was a series of perfectly aligned mini-volcanoes/oversized anthills. These were the ventilation shafts of a qanat below. 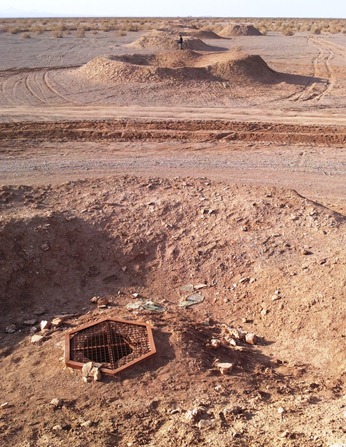 A grate covers a qanat shaft. For human scale, there’s a person behind the second hill. 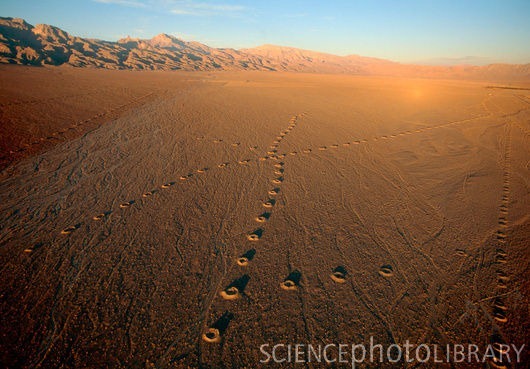 How qanat shafts look from the air.

These craters connect to a tunnel typically more than 20 meters (60 feet) down, and the deepest qanat goes down 275 meters (900 feet). Qanats are usually a couple miles long, with the longest reaching 70 kilometers (45 miles). As the qanat builders dug the underground tunnels, they had to be almost completely level, but drain slightly to push the water towards the outlet, much like modern sewer systems. Depending on the qanat, the tunnel level would slope down no more than the length of your forearm in the horizontal distance that you could cover in fifteen minutes of walking. Remember too that these were dug by hand tools centuries ago, lit by the flicker of an oil lamp. 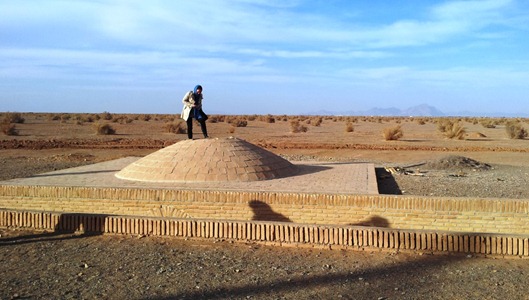 Entry to the Meybod mill.

In some places, however, a drop was intentionally added to the tunnel and the water was put to work. We visited the Meybod grain mill where 40 meters (120 feet) down, a qanat’s water would pour into a funnel and on to paddles to turn a millstone to grind grain. There was so much water going through this qanat that it could support two mills working fulltime. The tunnels were also useful when hiding from foreign invaders. For however many years these mills used to work, now they’re bone-dry because the water table has fallen due to unsustainable groundwater pumping. More details about Yazd’s water mills here.

As we were leaving the mill and driving back towards the city, we had qanat fever. Once you know what they look like, they seem everywhere. For example, what do you think those mounds are four pictures ago? We scanned the horizon for any visible lumps. 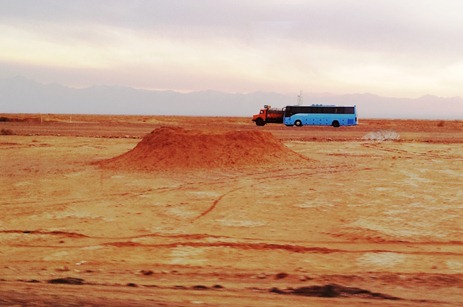 For weeks, we had been spotting cones of debris alongside the road in Iran. I first saw these from an airplane, a field of symmetrical and evenly spaced piles, each about five feet tall and twice as wide. They were lined up like the studs on a bracelet or eggs in a carton. Someone explained that these were leftover construction material (bricks, dirt, wood, cement) that had been randomly (illegally?) dumped off by trucks. Those weren’t qanats. 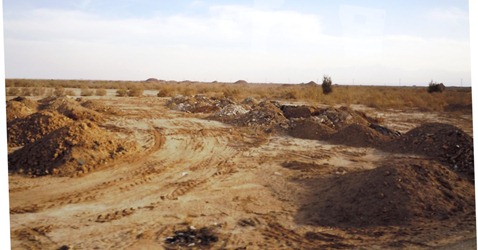 Much like how it’s easy to confuse latrines for streamgages, every pile of rubble in the desert now looked like it was part of a qanat. And there’s lots of piles of rubble in Iran. But there’s also lots of qanats (by some estimates 50,000). Assembled end to end, Iran’s qanats would reach two-thirds of the way to the moon.

They’re not just in Iran… although invented and perfected by the ancient Persians, there’s qanats from Chile to China. At the traditional water management conference, the delegates from Algeria and Oman showed complex modern systems managed with GIS. They’re still very relevant because the technology is environmentally friendly and dirt cheap, on the order of tens of thousands of dollars.

Back in the nearby town, we wandered through anonymous adobe-walled alleys until reaching a small locked wooden door with ancient metal fixtures. 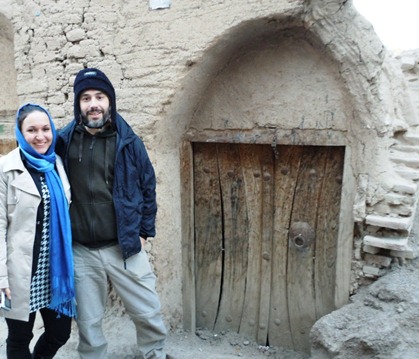 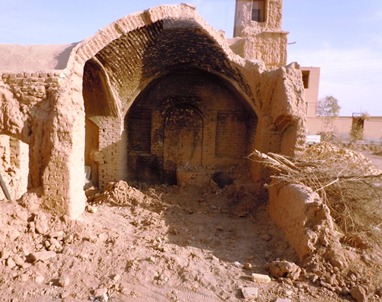 Typical half-destroyed building in this region’s back streets.
Half not-destroyed if you consider yourself an optimist.

Beyond the locked wooden door was a passageway that led to a 40 foot deep pit, at the bottom of which was one of the qanat outlets. Such canals would run under houses and owners would draw out water as needed. The rest would go off to other uses, like bathing, farming and so on. 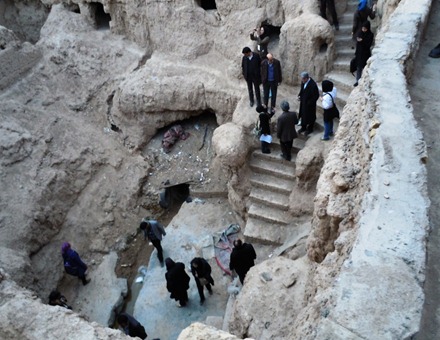 The qanat outlet is at the bottom of the stairs near the center of the photo. You would have to get on your hands and knees to crawl into it. Bring your oil lamp and hand shovel. 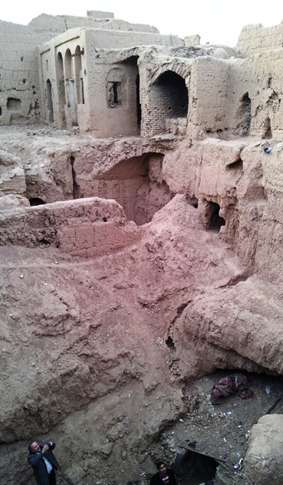 Humans at bottom for scale.

Again, qanat fever caused us to guess what other engineering marvels were tucked away behind the adobe walls of all the twisted back alleys? We tried to peek through the cracks of every locked wooden doorway but most were only abandoned homes. Later we visited a still-functioning qanat, having to ask four locals before finding it. It was just an unlabeled staircase down next to a traffic light, not too different from all the other unlabeled staircases next to traffic lights.

One thing about being a traveller is never being sure what you’re looking at, especially ancient structures. History is nearly always invisible unless there is someone there to tell the story. Now we were going to have to look at every tunnel, hole, pile, gate, ditch, field, wall, mound and doorway and wonder how many dozens of generations toiled anonymously to make these places thrive? Whose hands carved out each scoop of dirt to bloom otherwise sterile lands?

And where are those people now? 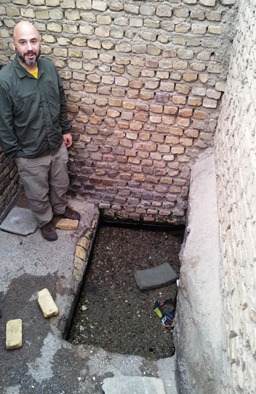 Small qanat still in use.

Posted by Thomas Pagano at 11:51 AM
Email ThisBlogThis!Share to TwitterShare to FacebookShare to Pinterest