It never snows on a Sunday: Changes in the dates of winter snow surveys cause drifts in data

For 100 years now, snow surveyors have repeated a ritual of braving winter conditions to
measure high-elevation moisture in rugged terrain. But we don’t measure snow like they used to. For one, data collection agencies are less likely to go out in the snow on a weekend. There also has been a creep towards making snow surveys ahead of schedule; what used to be (and is still called) the “April 1st” survey is now taken closer to March 27th. '

In a newly published Climatic Change journal article, I analyzed the dates and day of the week of over 300,000 manual snowcourse measurements collected by the USDA’s Natural Resources Conservation Service. I found four previously undocumented factors that influence when people go and measure the snow. These subtle changes in human behavior have created biases in the datasets that are used for everything from water supply forecasting to studying climate change. 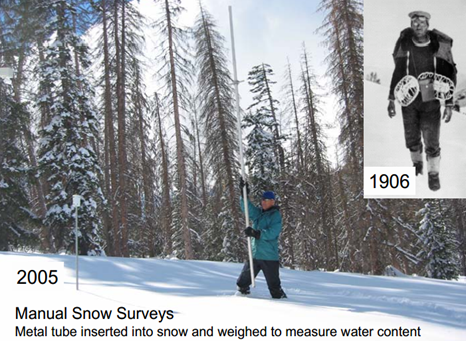 The inventor of snow surveys, James Church (upper right), using wooden snowshoes to get to a site. Bob Nault (center) measures snowpack in southern Utah in 2005. Nault and I drove hours to the site, then walked, but Utah usually makes extensive use of helicopters to collect the data. Almost all of James Church’s measurements were exactly on April 1st. That’s not the case today. 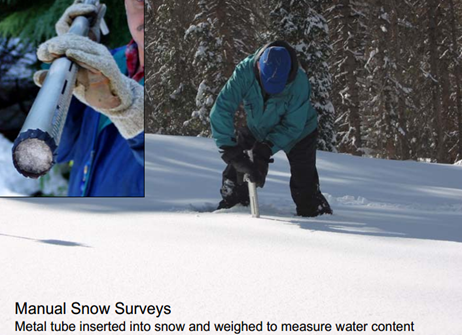 Nault puts the sampler into the record-deep snow. When the tube comes out, it takes with it a core of the snow. Upper left is Garry Shaefer, recent head of the NRCS’s snow data collection program, with a sampler full of snow (photo courtesy of Phil Pasteris, former head of the forecasting program).

April 1st is like Groundhog Day for snowpack in the Western US. Roughly a thousand surveyors go to their respective stations every year to plunge metal tubes into the snow and draw out snow cores that are weighed for their water content. One group of surveyors arrives at a site with bare ground in April for the first time in 75 years and knows that the community must be warned of imminent drought. However, when the snow tube plunges to an unexpected depth, it could foreshadow bountiful crops or raging torrents.

Snow courses aren’t like climate stations where observers get up in the morning, make a cup of coffee, walk a few feet out their back door to measure rainfall and temperature and then go read the newspaper. Snow measurement sites are in some of the wildest and remotest places in the Western US including Alaska. Getting to them is a big endeavor so it’s typically only done once a month. These monthly reports are as anticipated, reported and scrutinized as the quarterly earnings announcements of businesses.

To get the highest level of accuracy and consistency, all the data should be measured at the same date and time. However, it’s simply not practical to have everyone synchronize their watches and read their instruments exactly at the stroke of midnight on the first of the month. Most obviously, it’s dark at midnight and it is not safe to be wandering out in the snow. It’s cold, it’s easy to get lost, there are bears and there are avalanches.

So instead of the “April 1st” reading, it’s more like the “sometime around April 1st” reading, depending on the person, the site and the situation (it can vary as much as 10 days early to 10 days late). Actually, what happens nowadays on April 1st is that the bulletins of the data are released to forecasters and the interested public, so the data has to be collected before that. If the data comes in late, it’s not included in the bulletins and gets labeled as missing, which is bad. People want timely products, so this has put pressure on the agencies to collect the data earlier and earlier. Before 1957, the data was collected on average one day before the first of the month. Now, it’s collected about two and a half days early. 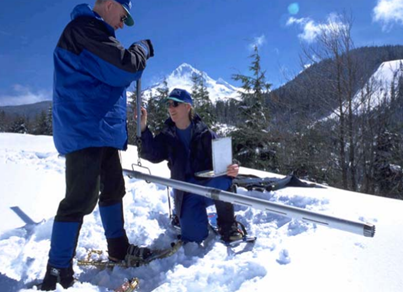 Another issue is weekends. If it was random, you would expect 2 out of 7 times the snowcourses would be measured on a weekend. But the earliness of the measurement depends on the day of the week of the first of the month.

Before about 1918, surveyors would faithfully measure snow exactly on the first of the month, regardless of what day of the week it was. From 1919 to 1957, the surveyors would tend not to measure on Sunday, but didn’t mind going out on a Saturday if the schedule demanded it. Nowadays, if the first of the month is anywhere close to the weekend, the surveys are typically taken on the Thursday before (not even Friday). Today’s surveyors are three times less likely to work on a weekend than their predecessors. Certain sites have gone decades never measuring on a weekend.

This reminded me of recent studies in the US and Australia showing how climate observers falsify recording zero without checking the gage if they think it didn’t rain. People often skip out of measuring on Sundays (reporting a zero), waiting until Monday to see what accumulated in the gage. People also like to record numbers divisible by 5 or 10, preferring to write down 0.45 inches even if the gage says 0.47.

Why does this matter? Imagine if you were taking an hour exam and you would get points taken off if you turned in your papers late. So instead you turn in your results about five minutes before the bell rings. The problem is that you’re losing those minutes that could be used to come up with better answers. It’s the same with snow data being collected on March 25th or 27th instead of April 1st.

Is this a big deal? A lot can happen in those final moments of the month, such as a big snowstorm. Last year the southern Utah site shown in the above pictures (Midway Valley) went from around normal to almost triple normal snow in the three days before Christmas. It is dangerous to be caught out during a major blizzard, so some surveyors might even check the weather forecasts and opt to get out and back before the snow falls. That’s contrary to the interests of those (like river forecasters) that would want that major event included.

Some years it doesn’t matter, it all just depends on the weather around the first of the month. When you average it over many stations and many years, collecting the data 3 days early means that February 1st measurements are roughly biased 5% of normal too low, and May 1st measurements are about 5% too high.

Read more on “Quantification of the influence of snow course measurement date on climatic trends” by Thomas Pagano in the journal Climatic Change.

Posted by Thomas Pagano at 8:08 AM
Email ThisBlogThis!Share to TwitterShare to FacebookShare to Pinterest