Vertigo is something other than the fear of falling

We had a quick discussion about if my travel insurance covered “falling down a well”. That’s not usually the kind of thing that happens accidentally, but we suspected it would be covered. Still, there were second thoughts when research scientist Mojtaba Pakparvar and field technician Gholamali Nekooian pulled back the heavy metal lid to their measurement well. 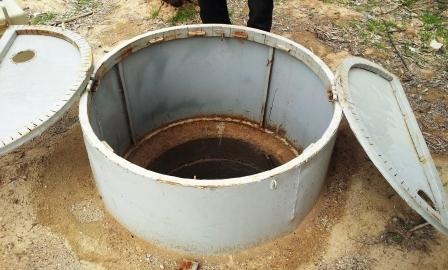 The cap to the well

The Kowsar Floodwater Spreading Experimental Station wanted to know how much of the captured floods were actually reaching the water table below. They made a series of hand-dug wells so they could measure soil moisture at various depths beneath the land surface. The walls of this well were a series of concrete rings, each with a horizontal piece of rebar serving as a step in a ladder to the bottom. The instruments were inserted into small windows into the soil along the well’s sides. 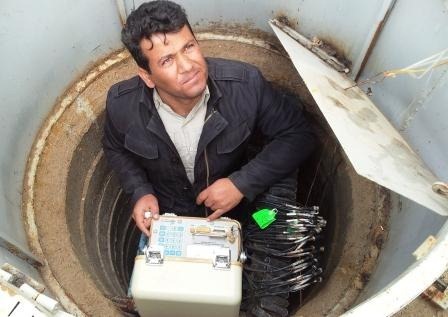 Gholamali Nekooian demonstrates how the data is downloaded from the sensors. Each of the metal cables on the right is connected to a soil moisture sensor below.

There’s no light in the hole, no ventilation and no safety lines. Sound seemed to go down but not come back up. The flashlight couldn’t see the bottom but we were told it was about 30 meters (100 feet) deep. When asked if we wanted to go down and see what it is like, Kitty enthusiastically volunteered to go first.

After a minute or two of climbing, she echoed up some of the lessons that she learned from watching documentaries about climbing Mt Everest. Specifically, people surge with adrenaline as they strive to reach the summit, but then don’t give enough thought to how the journey is only half complete at that point. They still need to return to base camp and it is on the descent that most injuries happen.

Here, the case was reversed. She wanted to scramble down to the bottom, but didn’t know how she would feel climbing back to the top. I thought it was a great metaphor for the idea of forecasting (i.e. predicting how you’ll behave in a situation you’ve never been in before), or the practice of having to pace your work during a long event. Just as she nearly disappeared from view, she called up that her arms were feeling shaky and that she was coming back up. 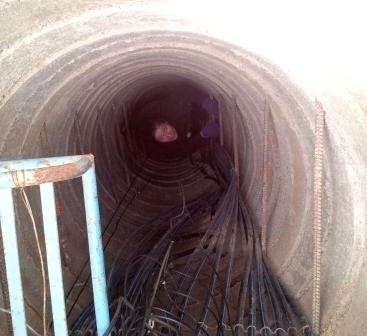 What’s that Lassie, Kitty’s fallen down the well?

I went down next, but didn’t make it as far. I never used to have vertigo until I read this Milan Kundera quote from The Unbearable Lightness of Being:

What is vertigo? Fear of falling? Then why do we feel it even when the observation tower comes equipped with a sturdy handrail? No, vertigo is something other than the fear of falling. It is the voice of the emptiness below us, which tempts and lures us, it is the desire to fall, against which, terrified, we defend ourselves.

Kitty made it about half way down climbing. This couldn’t compare to what digging the well must have been like, or working down it during the heat of summer. This wasn’t even the deepest well on site. When we asked Mojtaba and Gholamali how they managed to do it, they said that this was nothing compared to what the Qanat diggers must have gone through 100, 500 or 2000 years ago.

Posted by Thomas Pagano at 5:38 AM
Email ThisBlogThis!Share to TwitterShare to FacebookShare to Pinterest