On the Gareh Bygone Plain in Eastern Iran, there’s hardly any rivers that flow. A few springs make water so saline they could be used to grow saltwater fish. On occasion, intense rain falls and torrents of water come raging through the normally dry riverbeds. The floods used to race on to a salt waste downstream where it eventually evaporated. Now the floods are redirected into a set of stair-step terraces so they have a better chance of infiltrating down into the groundwater. This simple method of “artificial recharge” is effective at capturing about 70% of the floodwater and putting it underground. It also creates an oasis of plants and wildlife and costs a fraction of other technologies like desalinization or reservoirs. I visited the Kowsar Floodwater Experimental Research Station with research scientist Mojtaba Pakparvar to see what it was about. 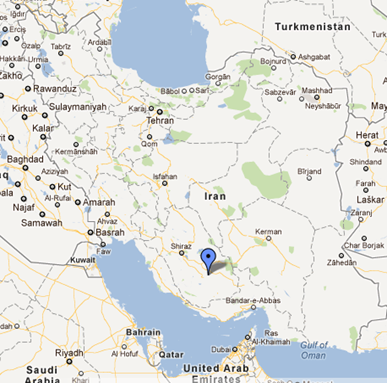 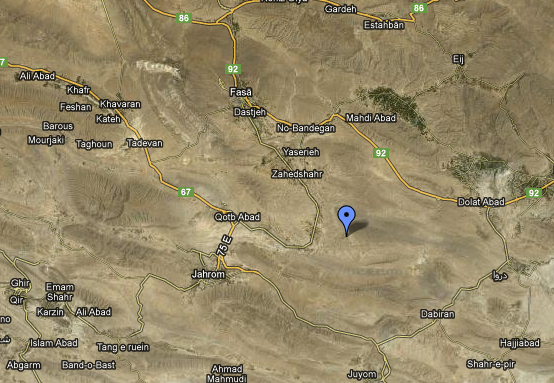 The Gareh Bygone Plain. Experimental station shown as the blue marker. On Google Maps, you can’t get there from here because there are no roads (…there are roads, they’re just dirt) The green blotches to the upper right are irrigated fields of wheat, among other crops. 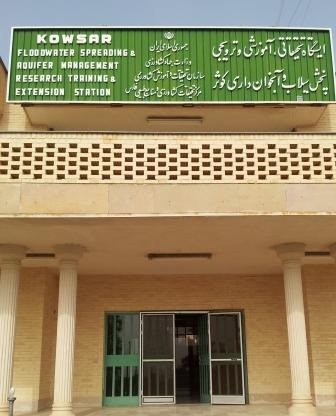 The headquarters of the station is a tidy two story building with a kitchen and bedrooms for visiting researchers and guests.

The first stop in the morning was a room with 3-D scale models of the research station and the surrounding mountains. 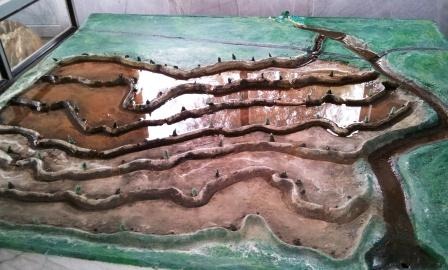 A scale model demonstrating a river being diverted into the fields.

Here’s the basic principles: floods move quickly through river channels (shown on the right in the above picture). In this project, the river is diverted into a series of terraces (left) with perfectly horizontal edges. Each of these pools is like a hydrologic speed bump, slowing the water down and giving it more of a chance to soak into the ground. Often times the floods don’t reach all the way to the bottom terrace because the water is being absorbed along the way. Any leftover water rejoins the river at the outlet of the last terrace.

As environmental as they might be, many of the people I’ve met that work in water describe their jobs as being like fighting in a war with nature, engaging in hand-to-hand combat with the elements. Many of the terms are the same, e.g. when the river is routed (redirected), the army is routed (defeated).

So if you consider floods a menace, think of these terraces as being like a series of barricades and trenches that the enemy has to fight through, being met with heavy resistance at each line. By the bottom, the invading force has suffered such attrition and losses that only scattered remnant forces can regroup with the main column. 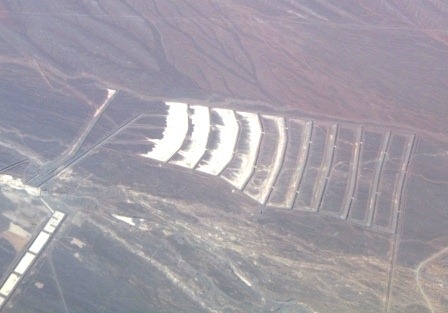 A photo I took from an airplane from Shiraz to Tehran of another floodwater spreading site. Notice how the terraces at the top are different from those at the bottom. The top terraces get the flood first and the rest get the leftovers.

The key challenge is making sure there’s no weaknesses anywhere along the trenches, else the enemy will slip through. Maintaining an effective floodwater spreading program requires constant vigilance, checking to make sure that the bottom lip of each terrace is completely perfectly exactly level. Nature will always test and probe the defenses, and if it has any chance to erode its way through to some new path of least resistance, the water will go pouring over the wall. The point of the project is to make the water go through the path of most resistance to slow it down and keep it contained in the ponds. 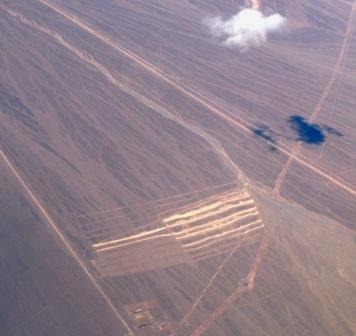 A different set of terraces, taken from the plane window. 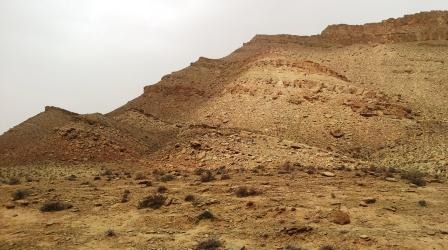 The landscape around the experimental station

Next, we drove out into the field. This area gets about 10 inches (250 mm) of precipitation a year, about the same as Albuquerque New Mexico. The evaporation potential, however, is almost as much as Death Valley. Anyone with a swimming pool would lose about ten and a half feet (3200 mm) of water to evaporation, in a typical year. 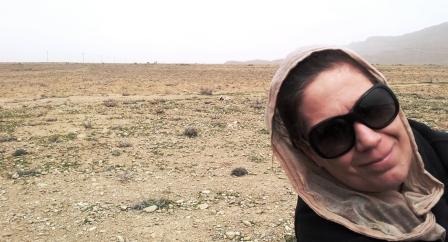 Mostly it was bare dirt

Yet, steps away from a barren rocky desert, the demonstration plots at the station are overflowing with life. The breeze makes the eucalyptus trees’ leaves flutter and the tall grasses sway. 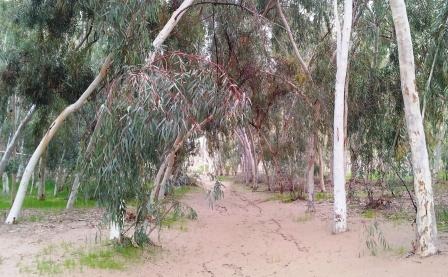 Eucalyptus forest on one of the terraces

We heard birds and saw grasshoppers. Wildflowers and fresh mushrooms broke through the cracks in the mud. 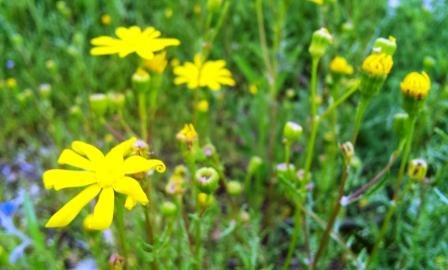 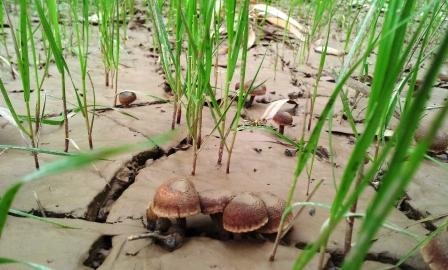 The night before we had been warned that it was not safe to go out after dark because of attacks by wild pigs. There have been sightings of rabbits, foxes, jackals, wolves and even gazelles. Why were they here? Because there was water. 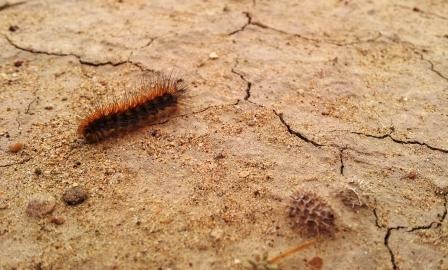 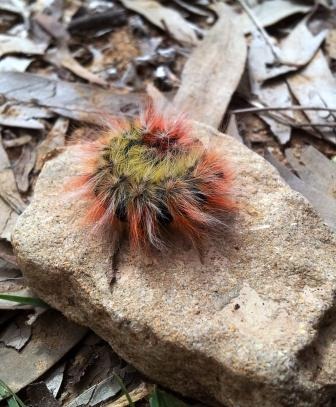 I found a strange black insect, armored like an armadillo. When I asked what it was, Mojtaba said “Oh, these are our friends”. It was a roly-poly (aka sowbug). These insects, along with the plants and cracks in the mud, help the water infiltrate more quickly into the soil. “Someone is getting a PhD studying roly-polys” (no joke…his name is Gholamreza Rahbar). The bugs were digging complicated lattices of pathways, burrowing through the hard surface crust down to about half a meter. Water can seep through the soil but it surges through these tunnels, more than quadrupling infiltration rates in the case of roly-polys at the research station. In other words, the water came, the plants thrived, the bugs came and then the bugs dug holes that now help the water go four times faster into the ground. All these dramatic changes happened in only a couple of years after returning water to the desert. 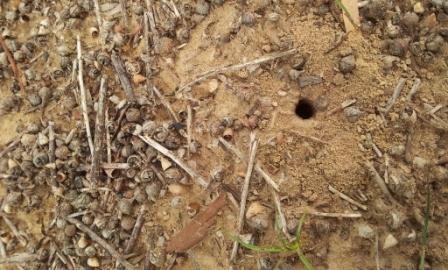 Roly-poly hole among the gum nuts.

The trees also create tunnels flow but on a much finer scale. They grow roots that eventually die, rot away and leave tiny empty passageways underground.

Surely there must be some downside to all this, some overhead. It’s nice and all creating an oasis in the middle of nowhere for plants and wildlife to thrive. But the main objective is to get the flood water deep into the ground so people can use it later. How much water were the plants using?

That’s a good question, as it turns out….

Posted by Thomas Pagano at 4:20 AM
Email ThisBlogThis!Share to TwitterShare to FacebookShare to Pinterest