The Power Makers of Tehran

After the mysterious interrogation of a scientist’s wife in the elevator of the conference hotel, we kept on the lookout for anything unusual related to security. It is easy for a paranoid foreigner to imagine what kind of surveillance is happening, especially after seeing movies like “The Lives of Others” where someone sits on the other side of the wall wearing headphones. It makes for great breakfast gossip, in part because it is completely unverifiable. However, as they say, the world will never know the greatest thief (or undercover officer) because such a thief would never get caught. Kitty also said “I can’t imagine they’ve bugged our room… They haven’t even come to change the sheets in a couple days.”

However, my antennae sproinged straight out when I saw an entourage of guards with radios whisking a dignitary into the elevator one night. In the center of the phalanx was a large man wearing a floor-length pea coat thrown across his shoulders like a prize fighter’s cape. He had the giant stature of a Boris Yeltsin and the quiet confidence of a Vladimir Putin. After much speculation (politician? bureaucrat?) it turned out he was Abbas Aliabadi, the CEO of MAPNA Group, a power construction company worth $2.6 Billion. Little did I know at the time, we were going to have dinner with him the next night. 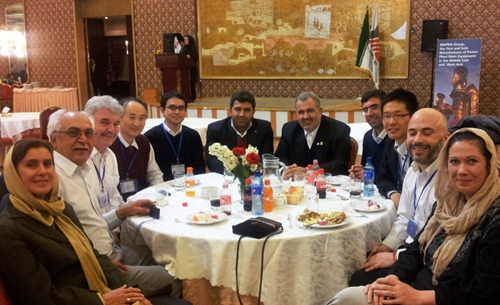 Quite charming and friendly, the CEO is to the right of the centerpiece. Kitty and I are to the right.

MAPNA was one of the top sponsors of the First International Conference on Dams and Hydropower in Iran, where I was invited to give a half-day training workshop and half-hour keynote lecture on river forecasting. There were around 75 sponsors from government, international organizations, and businesses. The conference went to great pains to pamper the VIP guests it had brought from overseas- the luxury was overwhelming. Do remember that much of my past experience was been with the US Government where so little as giving out a free bag of cookies draws an ethics investigation.

At times, I wondered what the value proposition was for the sponsors? Why would MAPNA’s CEO take time from his schedule to wine and dine (note: no wine in Iran) with scientists and show off all of the company’s projects from hydropower to locomotives? Where is all this money coming from? One colleague semi-sarcastically remarked “All this money comes from the consulting firms. The consulting firms’ money comes from government contracts. The government gets its money from oil. All the money in Iran eventually comes from oil.”

Iran has a simultaneous defiance of and respect for authority. We VIPs had special dining rooms and were led past the red velvet ropes into the special seating areas during ceremonies. The front row was reserved for heads of government agencies and other A-list celebrities. The most honored participants were seated near the center. At the opening ceremony I sat in the third row-center; in front of me was the body guard for the cabinet-level minister in the first row. 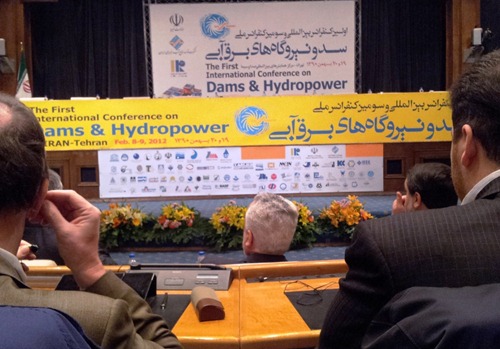 My view from the 3rd row of the back of the minister’s head.

It worked the other way too- the companies had promotional booths in the convention hall and those that donated the least were in a long exhibition tent outside in the snow. I made a point to go to the farthest booth down a dead-end wing of the tent, just to see what was there. The company representative leapt out and was so excited to get a visitor he asked to take a picture with me. 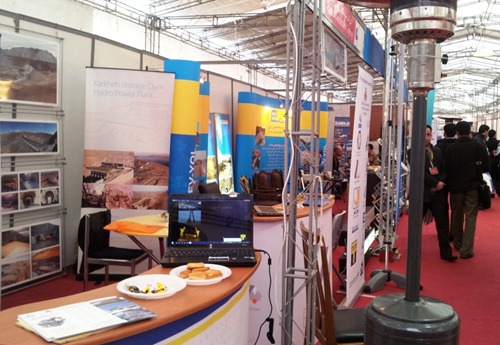 Booths in the exhibitors’ tent. 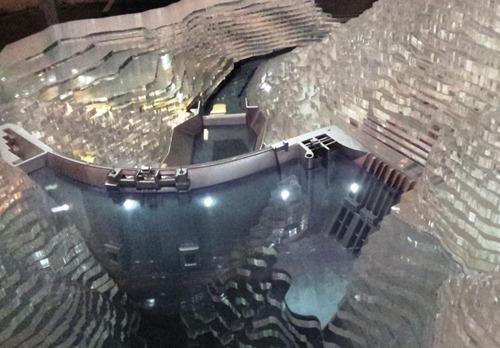 A clear glass scale model display of an Iranian dam project. This is the view upstream looking at the back of the dam. Around the side, you could see the outlet tunnels going through the walls of the canyon.

What may not be evident to outsiders is that, along with being a semi-democratic Theocracy, Iran is also a Technocracy, where technical specialists yield enormous power and there is a strong respect for science. The sanctions against Iran mean that many of the innovations and developments have to come from within. The educational system is very good, the science is high quality and the country is building major power projects like nobody’s business. In comparison, the US has all but stopped new hydropower projects, following a boom in building around 40 years ago. 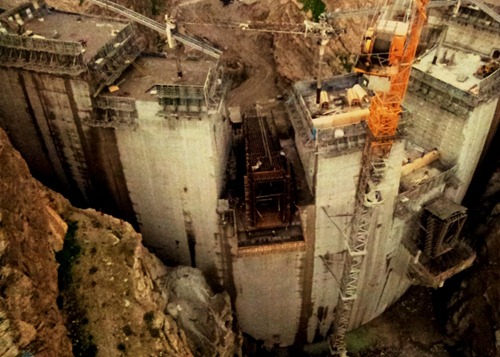 There is enormous pride in this self-sufficiency, much like the student that paid his own way through an Ivy League college, using money from his menial jobs and sacrificing. That kind of student usually doesn’t brag how tough his life was, even if his roommate is a spoiled rich trust-afarian. Occasionally, some resentment comes out, such as when the ministers made mention of “satanic” and “arrogant foreign governments” scheming against Iran.

As an aside, my eyebrows leapt up on first hearing the use of "satanic” in a speech at the conference. Is that a regular word in people’s vocabulary? I thought something was getting lost in the translation. “Evil”, maybe, but “satanic”? That seemed awfully specific.

Consider for a minute how amazing this is. For example, I might complain how much a regular bicycle costs. But how much time and effort would I have to invest to make a bicycle from scratch? This is not just assembling other people’s parts, but fabricating the parts myself. And how far do you think that bike would ride before falling apart? Iran literally and metaphorically makes its own bicycles…. and its own locomotives… and its own hydropower plants. 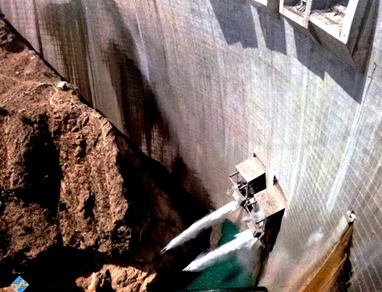 Water releasing from an Iranian reservoir

Posted by Thomas Pagano at 12:12 PM
Email ThisBlogThis!Share to TwitterShare to FacebookShare to Pinterest