Our first impression of Iran came as the plane was landing in Tehran. Our disembarkation took about twice as long as we expected because the passengers were drowsily gridlocked on their way into the aisles, saying “You first”, “No please, you first”, “No, go ahead, I insist”, “Please no really, it’s okay”, “You are too kind. You first” and so on to infinity. Iranians are polite, almost to a fault.

This was worlds away from our recent airport transfer through Guangzhou. As soon as the plane’s wheels touched the ground, the China Air passengers bolted from their seats, crowded into the aisle and unloaded their overhead bins. The flight attendant shouted over the intercom “we have not reached the gate- you must sit back down immediately!” She raced up the aisle frantically, scolding passengers, but the riotous donnybrook wasn’t going to be contained. There was hair pulling and eye gouging… and that was just among the crew.

On arrival in Tehran we promptly queued unnecessarily in the Visa line (which was for people that didn’t yet have a Visa- how did those people even get on the plane?) Then we unnecessarily queued to declare our currency (we needed to show it in person- it was in our checked luggage and we hadn’t even queued up at the baggage claim yet).

Remember, the first rule of travel is “Do I need to be in this line?” Maybe it is genetic, but we willingly queue in every line we can find, only to discover we needed a stamp first or the gate has been changed or we were going in the wrong direction or we didn’t need to claim our luggage or actually we did need to go back to the start and get our luggage. We never learn.

By the time all that was done and we arrived at the immigration checkpoint around 3 am, we were nearly the last in line. Showing up last feels better than actually waiting in line, even though the outcome is the same if not worse. The local contact, Mr Zamani, was probably exasperated that we hadn’t arrived yet and looked noticeably relieved when he saw us. He enthusiastically greeted us from beyond the intake. Equally excited, I strolled past the short line to the other side of the checkpoint. The guard rose from his seat and hairy-eyeballed me until I sheepishly remembered my place.

I am still trying to think of what parallel universe that kind of security breach would be appropriate in. Come to think of it, I saw an elderly woman (in China, funnily enough) charge through immigration to hand a bag to her friend on the other side. When accosted, she shouted down the police until they let her have her way.

A few minutes later, after scanning our passports and entering all our information, the Iranian guard beckoned us to follow him away from his station. We were passed off to another guard and led into a comically large room with nothing but a small desk and an old computer. This was the fingerprinting station.

The guard looked over our passports and then typed in our names, passport numbers, professions and so on. He seemed impossibly slow, pecking out one letter, surveying the documents through the bottom of a set of bifocals, pecking out the next letter, then returning to the documents, having lost his place.

Between entries, he would pepper us with friendly chit-chat, e.g. “where are you from?” Since he already had our passports, I wasn’t sure if this was like how a policeman confirms your age and birthday to check if you are using a fake ID. Australia-America is our usual confusing answer. “Is this your first time to Iran?” What does our passport say?

“We sorry to do this, but America fingerprint Iranian citizen when they go to your country.” It was something we had become used to. Brazil, especially, singles out US citizens for harassment but they say on the immigration department website that they are just matching the procedures and fees that Brazilians endure when traveling to America (e.g. visas to Brazil for Americans cost four as much as visas for anyone else.) 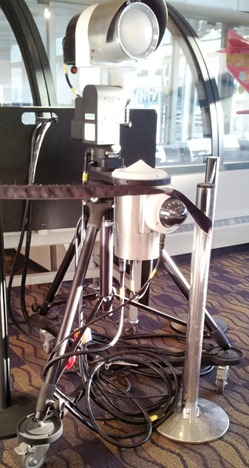 I never quite understood the imagery behind the phrase “sight for sore eyes” but after 25 hours of flying, we probably caused anyone looking at us to wince. The bags under our eyes had their own carry-ons. Somewhere over Austria(?) we experienced what the pilot said was the worst turbulence he had seen in 15 years. The lunging and heaving caused our in-flight meals to become airborne. When the tomato sauce from her own dinner collided with her neighbor’s red wine, Kitty’s area ended up looking like a ruined bathroom stall at an Ozzy Osborne concert.

I wondered about liability in natural disasters. Imagine that Kitty’s dress was something like a house that had been flooded. Was it the pilot’s fault for not giving enough warning before turbulence set in (e.g. the government didn’t give an accurate flood forecast?) Was it the neighbor’s fault for spilling the wine (like a reservoir spilling over downstream during a flood?) Was it Kitty’s fault for putting herself in harm’s way (by living close to a river)? Was it nobody’s fault because it was an Act of God (and if so, who accepts the cost?).

Kitty wasn’t having any of it, however, crying “This is not ok! This is really not ok! Is everybody alright? Is that lady alright? Somebody wake her up to see if she’s alright!” When I heard her say to the stewardess “I’ll have you know I’m a journalist!” I though it would be best to spend the rest of the flight hiding under my seat. 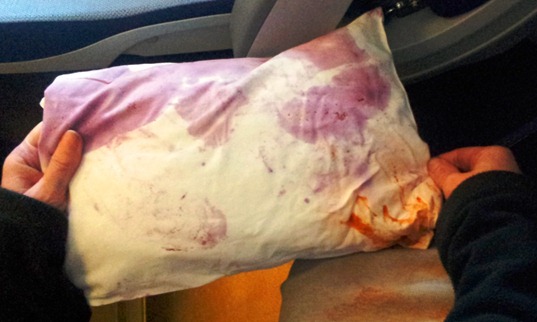 This is what the wine and sauce did to Kitty’s pillow and dress during turbulence. I think she was planning on submitting this photo as evidence of the disaster.

Even though it was after 3 am, a delegation from the scientific conference was there to meet us outside the baggage claim. The meeting was the First International Conference on Hydropower in Iran and I was giving a keynote speech and a training workshop on river forecasting.

There were hand shakes and flashbulbs and quite literally a red carpet. Between Kitty’s splattered dress and my Unabomber-style hooded sweatshirt, our outfits had the feel of a prank or a cut-up ransom note. In the official welcome photo, I’m also holding the rice bags we have used to wrap around our luggage- although the bags are a little frayed at the edges, they’ve lasted us seven countries so far. We were whisked off to a private car for the 40 minute ride to the north of Tehran, not including the 20 minute turnabout when our driver realized we were going in the wrong direction. 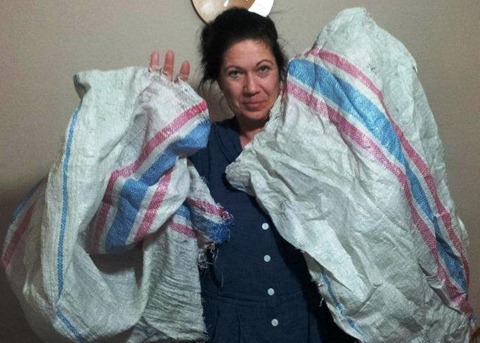 These rice bags are at the top of our list of must-have travel gear.

That night I was asleep even before my head hit the pillow.

In the morning, I woke up with one shoe on (or one shoe off if you’re a pessimist). I opened the blinds and took in a full panorama of the towering Alborz mountains, dusted white from fresh snow.

The skyline of Tehran

Posted by Thomas Pagano at 8:10 AM
Email ThisBlogThis!Share to TwitterShare to FacebookShare to Pinterest