We were hosted the first week by the First International Conference Dams and Hydropower in Iran. I gave talks and training workshops on river forecasting and computer modeling along with my former PhD advisor Soroosh Sorooshian. We got complete VIP treatment as we hobnobbed with cabinet level ministers and CEOs from billion dollar companies. We even listened to a full orchestra perform a specially commissioned symphony about the water cycle.

The Tehran conference had tight security on us. Any request to go anywhere sparked a series of phone calls that marshaled an entourage of guards. For some reason, we always wanted to deviate from the plan and this would put our handlers in a frenzy. On one trip to the local bazaar, Kitty and I had three handlers and two drivers in multiple cars that took about two hours to arrange.

We imagined that they had security codenames for us:

Guard touches earpiece. “Fat Cat’s on the prowl. Lost her bell. We’re gonna need a leash for her. I repeat, looks like she’s going to pounce from her cage.”

I refuse to accept that my codename was “The Gray Wombat”. I deserve alliteration.

However, the first sign something was wrong was that my webpage was (and still is) banned. The Iranian Government has an Internet Filter and this display would come up instead of any forbidden websites:

The translation is roughly “In the name of God, the compassionate, the site you are trying to access is in violation of the computer crimes law”. Within a few seconds, the site redirects to peyvandha.ir. Many news sites like the BBC, CNN and Daily Mail are banned. Strangely enough, sites like Drudge Report, Weekly Standard and CBS are still accessible. There is also no Skype.

During one of my talks at the conference, I mentioned that my site was blocked and a murmur went through the audience. Afterwards, a Russian friend corralled me and hushed that I should not joke about such matters, that this was a different type of country than I had been used to.

That night in our room we watched Press TV, Iran’s state-sponsored English-language news channel. Funnily enough, Press TV’s own webpage offers links to Youtube, Facebook and Twitter, all of which are banned. One also has to wonder who the audience for Press TV is… Compare, for example, who you think would watch a Farsi-language news channel sponsored by the US government (e.g. Voice of America)?

The broadcasting is nearly the mirror image of the US news. Let’s compare some typical stories…

US international news: videos of Middle Easterners in street battles with the police (the message being “try as they might, these brutal regimes can’t keep down the people that yearn for democracy and freedom”) and foreigners burning the American flag (“they still hate us”).

Iranian international news: videos of police spraying mace at US “Occupy protesters” (cf. above about brutal regimes) and an Israeli soldier using a gun to shove a Palestinian (with no context as to why the shoving was happening). 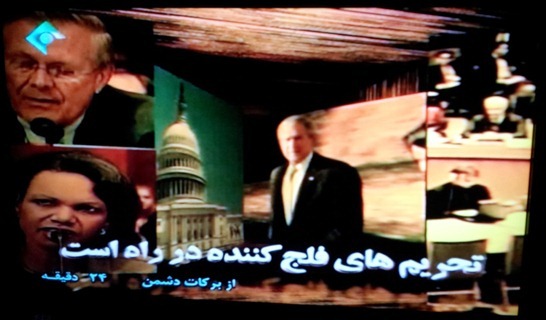 Press TV’s soundtrack to this piece was ominous

That said, there is some (satirical) stateside recognition that Iran is concerned that the US might be building its 8,500th nuclear warhead.

The main difference between the two countries is the local coverage… 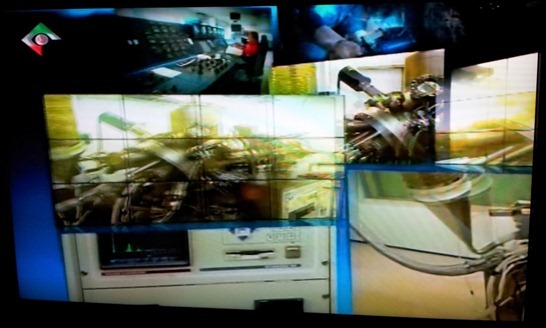 US domestic headline: “Rescued dog bites TV anchor in the face during feel-good segment gone wrong.” (this story has 21,000 comments).

All of the conferences I went to had extensive media coverage. As a visiting scientist, I have done four TV interviews since coming to Iran, including one by a woman in head to toe black robes (a Chador). 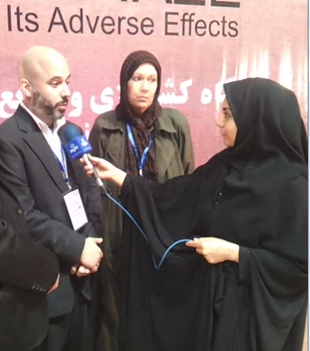 Here’s me being interviewed for the evening news

Anyhow, Press TV had lots of patriotic footage of the 33rd anniversary of Ayatollah Khomeini returning from Parisian exile to revolutionize Iran.

Historical video of the Iranian Revolution in 1979

There are full-sized banners of Khomeini and the current leader Khamenei nearly everywhere. 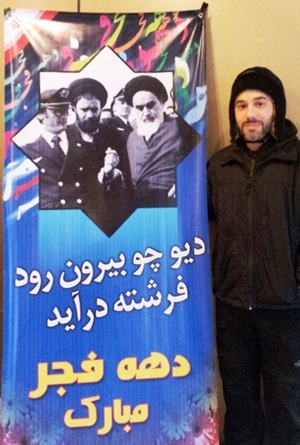 A banner in the hotel entrance showing the famous plane disembarkation of Khomeini on arrival in Iran.

When I opened the door to the hotel room the second night of the conference, Kitty jumped up from the bed and said “I am so so SO sorry! I think I did something bad and got us in trouble with the government.”

Posted by Thomas Pagano at 1:29 AM
Email ThisBlogThis!Share to TwitterShare to FacebookShare to Pinterest