The night before, a scientist’s wife was accosted in the elevator by a man in a suit, asking if she was staying in the hotel and if she had any identification. This made her paranoid that the hotel was being monitored by the authorities. She carries two passports but Iran does not recognize dual citizenship. Apparently they monitor expatriates until they try and leave the country but are then detained (this is particularly true for scientists). Someone suggested that the man was with hotel security. However, the workers at the front desk didn’t know about any plain-clothes guards.

Kitty wrote me an email about the episode and within an hour our Gmail was shut down. We were completely shut off. We tried her computer, we tried my computer, her account, my account, no luck. She figured that she had tripped some kind of flag or tried to access too many banned sites and now we were in trouble.

So what did it take for us to consider leaving the country? Political instability? Missile strikes? Boots on the ground? Bah, it’s all just rhetoric and saber rattling, that doesn’t affect us.

But mess with our email? Oh snap, this just got real!

We had a month’s worth of travel ahead of us, four more cities to go to, no access to any more money, no printouts of contacts, and no hotel names where we had reservations. We didn’t even have an exit flight to our next destination because we only had a visa for 7 days (that we were trying to extend to 29 days after arrival but we weren’t sure it would be approved). 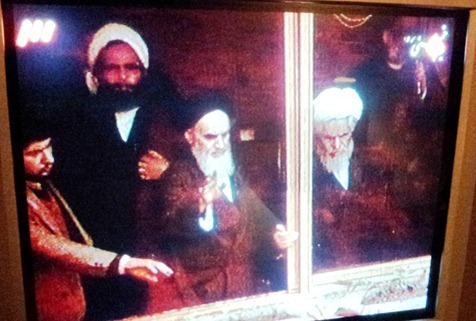 Meanwhile, the TV had lots of historical video from the Revolution

Of course, as this blog always comes back in some way or another to river forecasting, I had flashbacks to my interview with Kristy Chandler about a simulated flood management exercise in the UK. My thought bubble had her talking about how people don’t usually anticipate how disasters can cascade, that when a flood (or earthquake or hurricane…) strikes, communication and transportation infrastructure also goes. This makes it hard to reach people during recovery operations.

Not even two months ago did I post the advice that it is good to have a backup plan and to occasionally test out that plan in realistic but safe conditions. For example, maybe you back up your computer’s files, but have you ever checked to made sure that the system works? Or do you just have faith that it’ll all work itself out somehow?

So do you have a plan if you, say, lost your wallet? Or your passport? Or your computer? Or all three at once? In a foreign country?

Perhaps the “do a dry run” advice falls apart in those cases where it is not actually possible to anticipate what the conditions will be when the plan is enacted. How do you prepare for something that has never happened to you before? For example, yesterday Kitty walked up to a horse and it bit her. We hadn’t practiced our being-bit-by-strange-horse-in-strange-country procedure in years!

We started using our local mobile phone and faulty memories to try and reconstruct our itinerary. Eventually the tech-savvy daughter of a local professor was able to pass on to us that Gmail was blocked for everyone in Iran. Indeed, more generally the block was on anything involving “https” in the address, which also includes Dropbox and most every search engine out there, such as Google and Yahoo.

This was done because the anniversary of the revolution was also the anniversary of uprisings in Iran several years ago (I remember the videos on US media of truncheon-yielding soldiers bashing students). Any underground communications about new unrest would be suppressed. The news anticipated that the internet would be back during Esfand, which translates to the western calendar as late February in several weeks. 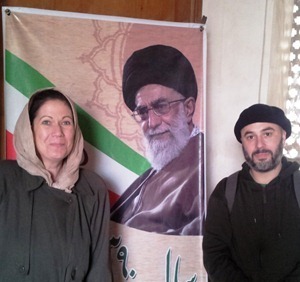 Kitty and me with Khamenei at the entrance of a tourist garden. I believe the poster was to encourage donations to a charity.

Without Google, we couldn’t even Google a way out of our problem. After lots of trial and error, I found that www.dogpile.com still worked. This was the search engine I used back in 1996 before Google was popular. At the time I was using Netscape as a browser. Come to think of it, I was also pretending to get tipsy from non-alcoholic beer and had to sneak off into the bushes to smoke cigarettes, so I guess not much has changed since high school.

Eventually I had to find an international calling card (remember those?) and phone my family (remember doing that?) to log into our accounts to get some information.

As predicted, Gmail returned during Esfand. We have voluntarily given up technology in the past (such as during 10-days of silent meditation in Nepal), but having it thrust upon us was a whole different story. In a strange way, it has been a blessing in disguise to be freed of email and to fully enjoy traveling for once (more about that later).

Aside from all the initial technology kerfuffles, we’ve felt entirely safe here (except for the biting horses). The people are unlike anybody else we have encountered. Iranian hospitality has been completely overwhelming and we have felt like accidental celebrities.

This year I wanted to travel so I could challenge my preconceived notions, both about the science of rivers and the world in general.

Posted by Thomas Pagano at 6:08 AM
Email ThisBlogThis!Share to TwitterShare to FacebookShare to Pinterest