Maps of Thai Floods and Inside the War Room

In addition to the usual official sources of flood forecasts and the webpage by Google (mentioned previously) there are several new (to me at least) great map-based interfaces to Thai flood information. If these are new, it would be interesting to know if, in this age of the Internet and data sharing, things like this would pop up in other countries like the US or Australia. In my own experience, there has been a lot of interest in realtime flood mapping and prediction from a research-applications sense, but it's rare to see this information being so well shared and repackaged.

Much of the official english-language resources (e.g. summary bulletins) are available at this page: http://www.bangkokgis.com/flood/index.php. However, a picture is worth a thousand words and the people at our hotel in Bangkok were mostly glued to Thaiflood, refreshing a couple times an hour:

For finer spatial resolution the Thailand Flood Monitoring System has some comparisons of the current situation to a past few years of floods (this is just flood monitoring and historical reference, not forecasts) 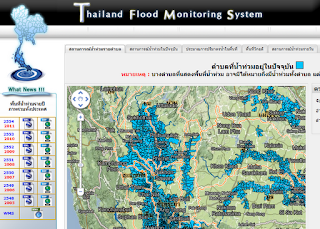 The Flood Monitoring System is a clearing house for satellite data, the office of which is shown below (and there's a gallery of photos of the office in action)


This United Nations sponsored webpage UNITAR-UNOSAT also allows people to upload Geotagged digital photos and combines it with various layers of information, such as flood extent:
Again, all this is just flood monitoring, but for maps of forecasts, the Bangkok Post recently posted an image from the Disaster Warning Centre, describing a "Worst-case scenario". This somewhat resembles Bangkok's land elevation map, the medium blue areas in the south center area being the lower elevations  (and hence some of the deeper flooding). 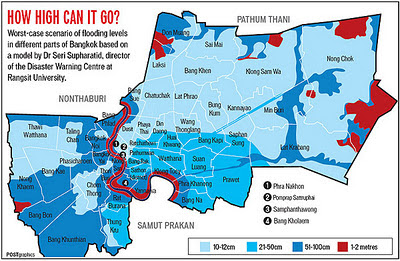 A phrase like the "worst case scenario" is a double-edged sword. This is the kind of information that decision-makers crave and request from forecasters. But what is the chance of this worst case scenario happening? 1 in 3? 1 in 10? 1 in 100? History is filled with examples of where the actual outcome was above the worst case scenario and decisionmakers ended being very resentful of this. Of course, forecasters could instead conjure up a wildly high scenario (e.g. take the above map and multiply it by 3), but this leads to wasteful overplanning and its own form of resentment.
Posted by Thomas Pagano at 11:08 AM
Email ThisBlogThis!Share to TwitterShare to FacebookShare to Pinterest