I have only a few simple pleasures, but stumbling upon a streamgage without intending to is one of them. This even happened on my birthday this year. Along the picturesque road from Kathmandu to Pokhara my streamgage spotting sense was on overload but there were plenty of false alarms.

There are many kinds of streamgages but nearly all of them measure a river's height (or depth, if you're a glass-is-half-empty type person). A basic manual gage is just an oversized ruler planted in the riverbed to show the stream's depth. Most automated gages drop a line down to the water surface where there's a floating bobber; the depth is measured by how long the line is. This line is encased in what is called a stilling well, a long tube. There are good in-depth stories about streamgages and what they do and there is another presentation here.
The gages have to withstand floods so they are heavily armored. They are usually in easy to access places, such as next to bridges where roads cross rivers.

One of Nepal's main highways is just shy of being two lanes wide, one in each direction. Vehicles barrel around blind turns, snaking through the mountains with sheer drop offs and no guard rails. We saw two accidents including a large truck that had rolled off the side of the road. Understandably, landslides are a major concern in the region because once a road is blocked, there are not many other options.

I would guess one-third of the six hour car ride from Kathmandu to Pokhara rides alongside rivers, so I spent most of the day trying to crane my neck at bridge crossings if I could spot any streamgages. I was on the lookout for something that looked like a small shed with a door on it.

The bad news for me is that there are lots and lots of things that look like streamgages in Nepal.

There are many small roadside shrines that could be mistaken for streamgages. Here is one at Fewa Lake: 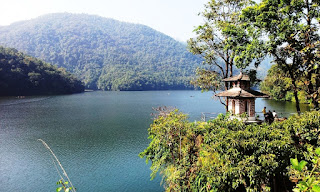 The give-away for the temples are their two-tiered shape. It was nice to think of streamgages as being like sacred places, just because of how important they are and how seers (hydrologists) use their wisdom (data) to divine prophecy (forecasts). 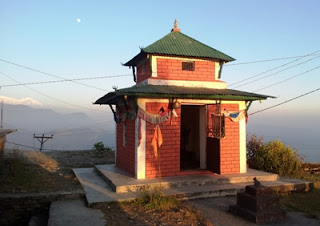 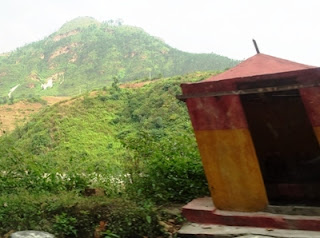 If you take the $5 bus (for six hours from Kathmandu to Pokhara) you'll be packed in like a human terrine, or can opt to ride on the roof. Because I am weaning off crutches we indulged in a private car with a driver. The first time our car backfired, it sounded like a tire had exploded, but otherwise it was great.

Our driver, Krishna, was friendly and cheery but we had a limited vocabulary in common. The main advantage of a private car is that you can stop whenever you want, say, to take pictures of scenic overlooks. Occasionally something that looked like a streamgage would come into view as we rounded a corner or crossed a bridge and we'd excitedly (and unexpectedly) yell out to stop. We can only imagine what Krishna thought the common theme of our requests were. I don't think many people take photos of the hydropower plant:

One time we saw a shed with a door that looked something like the below.


We careened off to the side of the road and came to a stop. I excitedly jumped out and hobbled over to the building. I had been fiddling with my camera to get ready to take a photo, when the door opened up and a Nepali man stepped out.

It turns out that closet-sized buildings like this with a small triangle window are outhouses (toilets).

The man was a little startled and thoroughly confused as to why I was taking a picture of him coming out of the loo. Traffic kept roaring past in both directions, horns tooting.

We stood in awkward silence until I said "Namaste" (Hello).

He said "Where are you from?"

You would think this would be an easy question to answer. I took longer than I probably should have before replying "Australia-America".

He paused and said "Mmn, Australia-America is a good country".
Posted by Thomas Pagano at 1:02 PM
Email ThisBlogThis!Share to TwitterShare to FacebookShare to Pinterest