Manila hydrologists in the heat of battle (part 2)

Here's roughly how the total forecast process worked when I was there during emergency operations in anticipation of Typhoon Quiel.


There is a meeting in the weather forecasting room between the meteorologists and the lead hydrologist. The meteorologists figure out the path of the eye of the typhoon and the storm's wind speed. The public storm warning signals (much like the US's "category 3, category 4" storm system) are only based on wind speed.
However, the hydrologist is mostly interested in how much rainfall and when? Somewhat frustratingly, meteorologists talk about time of landfall and peak rainfall rate (e.g. 15 mm per hour). It can be hard for the hydrologist to convert this to total rainfall depth (e.g. 105 mm in the next 12 hours). It's a bit like trying to figure out your annual salary from just knowing that you'll earn the most (~$1000/month) around March. What if you earn nothing for 6 months of the year?


The hydrologist goes across the hall to the flood forecasting center where banks of computers monitor data across the country.

The Manila office's main concern is monitoring the levels of 10 nearby dams. The hydrologists discuss the situation and try and figure out the implications of the rainfall forecasts for the rivers. More on this later and in other posts... for now we'll just say "And then the magic happens".

While the river forecasters were trying to do their analyses, the phones were ringing off the hook.
Currently, Manila's public river forecasts (on their webpage) come in three types that translate into something like flooding is "possible", "likely" and "imminent" (or it's already occurring). Occasionally there are statements about how the river is expected to continue to rise or fall. I didn't personally see any quantitative forecasts for Manila like "the river will crest at 18.2 meters at 9 pm".

After writing up some text, there might be some additional discussion with the meteorologists to make sure everyone is on the same page.The hydrologists then literally sign off on the products... The products are distributed on the web and by fax to various agencies. Then the press conference begins. 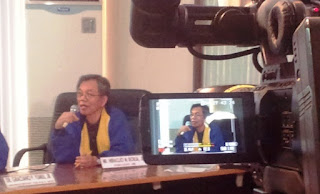 There's a discussion of recent rainfall, current flooding, forecast rainfall, dam levels and possible future flooding. The briefings are a mix of Tagalog and English, the two official languages of the Philippines. Indeed, individual sentences are often a mix of both (called Tag-lish), weaving in and out of English. I'd catch the occasional phrase like "serious consequences" or "pretty close". 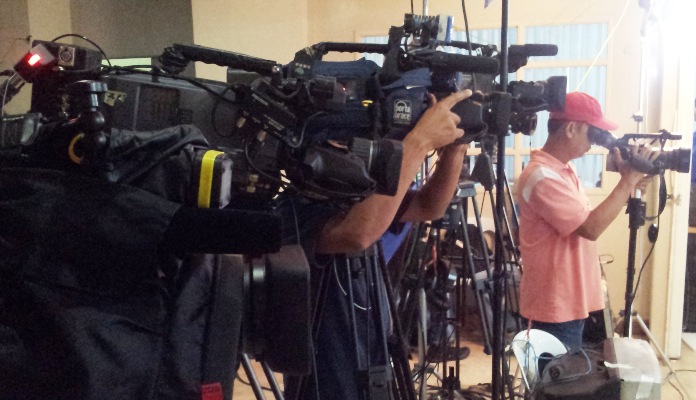 There's a few televised questions from reporters and then afterwards the media might try and grab a one-on-one followup with the forecasters as they head back to the office. 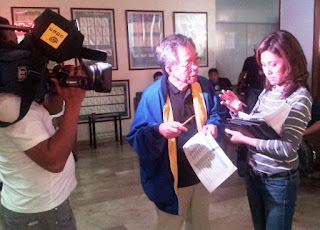 The media briefing process repeated every six hours. During the time I was there though, the staff stayed late in to the night checking the status of the dams every hour because they were in emergency mode.  Normally it is much more relaxed and there are not as many people working at the same time.

I was very lucky to be there at this time, both in the sense that Typhoons only strike a couple times a year, and that PAGASA allowed me inside during such a busy time.
Posted by Thomas Pagano at 4:25 AM
Email ThisBlogThis!Share to TwitterShare to FacebookShare to Pinterest