Capturing the fear of anticipating floods

There's a well-written article from the Associated Press/Todd Pitman about the Bangkok floods.

I like the imagery and storytelling. As an aside, here's information about relief donations. All the below photos are from the AP and are linked from the original story. 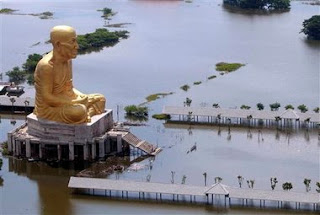 "BANGKOK — The threat has loomed large over this giant metropolis for weeks: Floodwaters could rapidly swamp glitzy downtown Bangkok, ruining treasured ancient palaces and chic boutiques on skyscraper-lined avenues in the heart of the Thai economy. The floods haven't come, but the sense of imminent doom is growing by the day, seeping in through worried conversations, school closings and emptied store shelves."

A friend of mine once said that good writing should capture the suspense of "the coming doom". The above paints a wave of worry racing ahead of the actual floodwave. It continues, 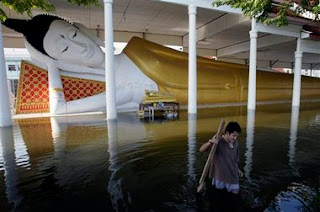 "'The water is coming, it's inevitable,' said Oraphin Jungkasemsuk, a 40-year-old employee of Bangkok Bank's headquarters. Its outer wall is protected by a six-foot-high (two-meter-high) wall of sandbags wrapped in thin plastic sheeting. 'They are fighting a massive pool of water. They cannot control it anymore,' Oraphin said. 'There are barriers, but it can come into the city from any direction, even up through the drains.'"

As a forecaster, I might contend that nothing is inevitable (nor impossible), just very likely. Nonetheless, it has the trappings of a thriller, monsters swarming through the sewer, climbing out of manholes. The door was locked, but they smashed through the window. 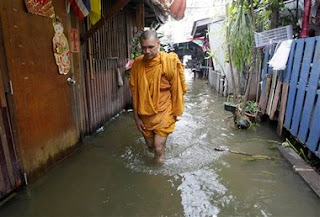 "About two weeks ago, the capital itself began waking up to the reality of potential catastrophe as floods dramatically overwhelmed neighboring provinces. The drama has fueled panicked exoduses from the hardest-hit areas and, in Bangkok, shopping sprees as residents stocked up on emergency supplies."

The flood acts like the serial killer of a slasher horror film, picking off minor characters one-by-one, increasing the frenzy before finally setting its sights on the main characters (in this case, Bangkok).
"Prime Minister Yingluck Shinawatra on Wednesday acknowledged the crisis has overwhelmed her nascent government. On Thursday, she announced authorities were opening floodgates that had been keeping water out of the city. It's an attempt to let the vast flood pools empty into the sea, but the move risks a potential overflow as water runs through already inundated canals." 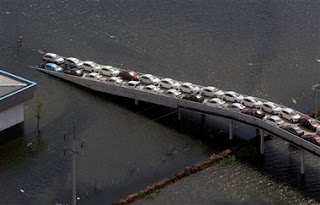 "On Thursday, vehicles began parking on elevated expressway bridges on the northern outskirts of the city, snarling traffic as trucks piled high with people apparently fleeing flood-hit zones moved through the streets."

I can't think of a recent disaster movie that doesn't include people abandoning cars to run through the streets. 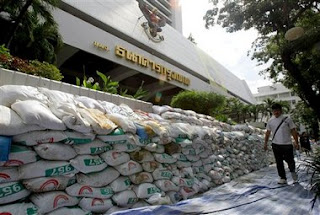 "But much of downtown looked totally normal, if eerily calm, and a quiet panic was palpable."

I'm not sure if there's a name for this, but it's a device that's often used in movies. If the background music goes silent, this will catch the attention of the listener...it gives the sense that what is about to happen next is very important. In Star Wars movies, for example, a new unknown weapon is fired by the enemy and for a three second pause a wide shot is shown in total silence. Then the building/spaceship/planet explodes in a furious cacophony. It is the pause between the lightning and the thunder, seeing the mushroom cloud and being blown away by the shockwave. 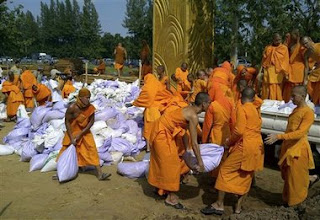 The article finishes with the story of a shopkeeper:
"Oraphin now lives with a sister in a dry part of Bangkok, but tales of water creeping closer are spooking residents. She said her brother, living elsewhere in Nonthaburi, was recently awaken by the flood water itself — which welled up suddenly into his home as he slept on his bed. 'It can come very fast ... the problem is, nobody knows from where it will come,' Oraphin said. The only thing certain, she added, 'We know it is coming soon.'"
Posted by Thomas Pagano at 10:40 AM
Email ThisBlogThis!Share to TwitterShare to FacebookShare to Pinterest