Yesterday we arrived in Bangkok as the flood waters were rising. After heaps of rain, a colossal flood wave has surrounded the city and is threatening it from nearly every direction on its last stop before the ocean.
There are many stories on the news about it


This story includes an opinion poll about how well the flood warning system is doing:


Furthermore, according to a recent public opinion poll conducted by Abac Poll, the public gave a rating of 3.4 out of 10 on the overall performance of the government’s Flood Relief Operation Centre in disseminating flood information to public.
Additionally, 87% of the respondents considered flood information and news from the centre unreliable, while 86% felt the centre had not provided clear information.
Further, the government's flood early warning system was rated at only 3.1 out of 10, according to the polls.
The public's frustration came amid claims that, in some cases, factories and the public were told to evacuate only when flood waters had already reached their doorsteps.

Early this morning we had a stimulating conversation with S.H.M Fakhruddin, the lead hydrologist of a pan-Asian forecasting center called RIMES (Regional Integrated Multi-Hazard Early Warning System). He knew a lot about the forecasting systems here and some of the challenges of implementing new systems. Two themes of the conversation that particularly resonated with me were the communication of uncertain information and the challenge of forecasting in a politically complex environment. Was he being impacted by the floods? His center is shut down because it is surrounded by water so he has to temporarily work from his car. I hope we'll hear more from Dr Fakhruddin but for now he had to catch a flight.

We also walked around the metropolitan downtown region where some of the businesses were sandbagged, others weren't. When we talked to some business owners there was a sense that the flood threat had passed and there wasn't much need to worry.


Then we took the ferry up the main river and the ferry terminal itself was underwater. The river appears completely full up to the lip of the flood walls. 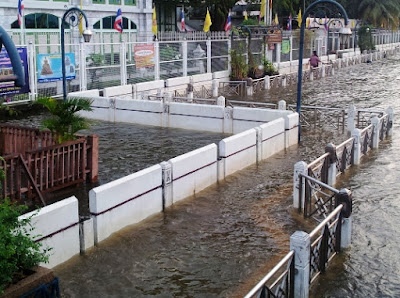 When we got off the ferry, we noticed that some business owners had replaced sandbags with temporary brick walls around their entrances. The hotel itself has lines of sandbags going through the lobby and has moved the valuables to the second floor. Apparently there are contingency plans to move us to another hotel if we are flooded. 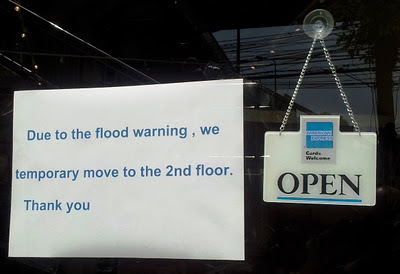 I will say one good thing though about Bangkok -- extremely fast internet. After being internet starved for nearly two months now, the speeds are about twice as fast as what I would get in Melbourne.

Also, the first drink I grabbed when I got off the plane was a bottle of "ENSO"...That's an inside joke to climate forecasters. ENSO is the El Nino Southern Oscillation and it describes how the ocean and air in the Pacific behave to affect the weather in other parts of the world. 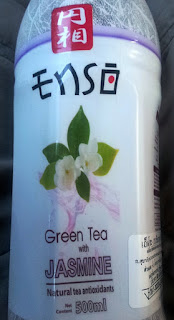 Posted by Thomas Pagano at 11:25 AM
Email ThisBlogThis!Share to TwitterShare to FacebookShare to Pinterest