Big Water in the Outback (Australia)

About a year after the last flood disaster, Northeast Australia is getting hit again with major rains and high water. Thousands are being evacuated, with hundreds being airlifted by helicopter. 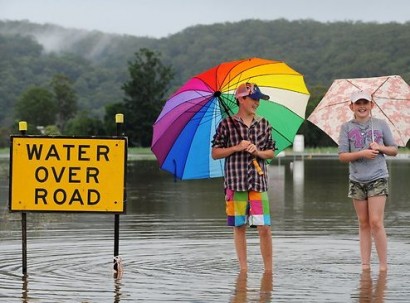 Photo of Flooding in Grafton

Here is today's rainfall map from the Bureau of Meteorology, red areas are where there has been more than 100 mm (~4 inches) of rain in a day. 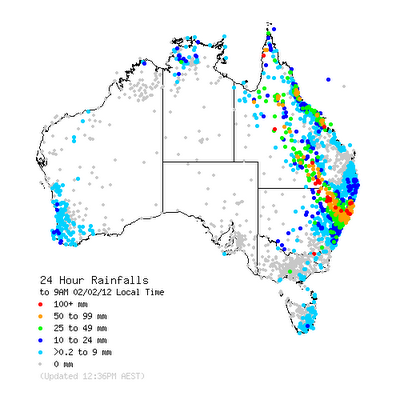 From one report about the heaviest areas of rainfall:

Croki and Manning Point have been warned to prepare to evacuate as the Manning River continues to rise. That evacuation order was likely to be put out later on Thursday, Dep Comm Pearce said. The region has been hammered with 250mm [~10 inches] of rain overnight, and the town of Wee Waa is completely isolated. About 2500 residents there will be monitored through regular food and supply drops, Dep Comm Pearce said.

I’ve never experienced 10 inches of rain in a day, it’s hard to even visualize. Not surprisingly, the rivers are also high: 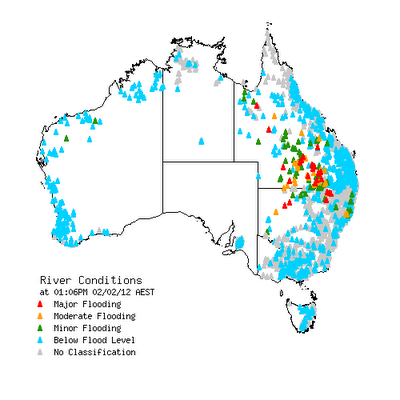 Roughly, green means some inconvenience, yellow means there might be some damages and red means total chaos. Parts of the Balonne River (at Weribone) are already around 3 meters (~10 feet) deeper than the threshold for that worst category. The Mehi and Gwydir rivers continue to rise to levels not seen since the 1970s.

This all comes on the tail of recent floods:

"We are only six weeks out from the last floods so the ground is sodden," says Ms Humphries.
"All the billabongs, all the creeks, all the gullies are already full and there's nowhere for this water to go except up."

Here's what the Moree Plains Shire Mayor (Katrina Humphries) had to say about people heeding the evacuation orders:

"People have had plenty of time to prepare. Some people will want to stay behind, but they can get into difficulties, some have refused to leave and then and called for help later. It is better if everyone goes," she says. “The old timers are telling me that this flood will be as bad as the floods of 1955. We also just don't know how much water is headed our way as most of the waterways in this region are not metered. What I don't want to see is any loss of life and I hope we don't have any loss of life but it is very hard to gauge the stupid factor. You can give people advice but there are no guarantees that the stupid factor will not get in the way, driving through floodwaters, swimming in floodwaters, things like that. But if people do get in trouble after being silly and need to be rescued, they won't get much sympathy from around here."

Posted by Thomas Pagano at 12:07 AM
Email ThisBlogThis!Share to TwitterShare to FacebookShare to Pinterest