Update on a Data Junkie’s Waistline

Several months ago I wrote about an experiment where I weighed myself every day for several years to try and better understand how my body works. I was inspired by Ted Fujita, the famous tornado researcher (when you hear about “F5 tornado”, the F is for Fujita). On his days at home he would continuously measure his weight and other things like blood pressure and mark their reaction to events e.g. mowing the lawn, eating a meal, taking a nap, and so on.

The ups and downs of my weight described in the previous post were a great analogy for the difference between weather and climate. Yesterday it was veritable t-shirt weather (61  F/16 C) in Hartford, Connecticut, US where I am now. Last year there was so much snow, it was like the movie The Shining. But what does it mean, are there any long-term trends?

I haven’t been able to keep up my routine while traveling, but I did find scales here and there to try and fill in the gaps. So here’s the latest update: 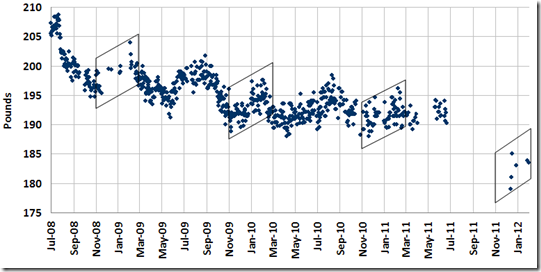 1. There is a lot of day to day “noise”. \Weight can swing five or more pounds in a day but it usually goes away quickly. This is a bit like the passage of weather systems and cold/warm fronts overhead.

2. There are slow seasonal drifts, cycles that last several months. The diagonal blocks show what happened each year between November and February. It seems typical to gain five pounds over the holidays, but then to lose it in March … And then put on more weight in June (Australia’s winter) and take it off in September. Weatherwise, this might be the difference between summer and winter or the irregular but sort of cyclical effects of El Nino.

3. In addition to the gentle trend between 2008 to 2010, there is a sharp shift in 2011 after the gap. I have been active and walking much more and eating simpler foods while travelling full-time. It has been a major change, unlike anything seen before. Could that last shift be like climate change?

What you’re also not seeing is the within-day variation of weight. If I had to guess, it is lowest before breakfast and highest after dinner and varies about two or three pounds from lowest to highest.

Could someone argue that my going from 179 to 184 in the most recent month means the shift didn’t happen or that the trend has now reversed? Probably not, considering that it is within the pattern of the usual December/January holiday-time body inflation. What is important is setting record low weights on individual days and having a low overall average over the last two months.

However, I see parallels with how some discuss the relative lack of trend in temperatures over the last 10 years. Yes, the last 10 years are very much warmer than 30-50 years ago, in some years setting records… but there’s been a levelling off. Is it a small cycle within a trend?

Posted by Thomas Pagano at 3:16 PM
Email ThisBlogThis!Share to TwitterShare to FacebookShare to Pinterest