This week we were in Perth... Everyone recommends going to Kings Park, which has a sweeping cinematic view of the skyline and the Swan River. To my delight and surprise Kings Park is also home to the Mount Eliza reservoir, built in the 1890s. 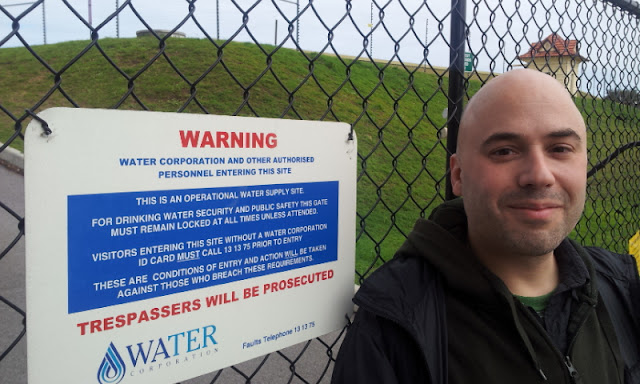 It's covered by a large shed and has two rings of chain link fences around it, but still, it was a good start to a great day. Must remember to call ahead next time to try and get the behind the scenes tour.

The next must-see place near Perth is Fremantle. It's where the Swan River meets the Indian Ocean. It has many historical buildings and is a major port. After a good amount of googling we were able to find the sea level sensor, as shown below.


I'm not completely familiar with sea level gages, but I'm pretty sure it's the red and white boxes. There's probably a float in the thin gray pipe that goes vertically into the ocean on the right (between the red and white box). Then there's the large gray box on the left that may or may not be related. 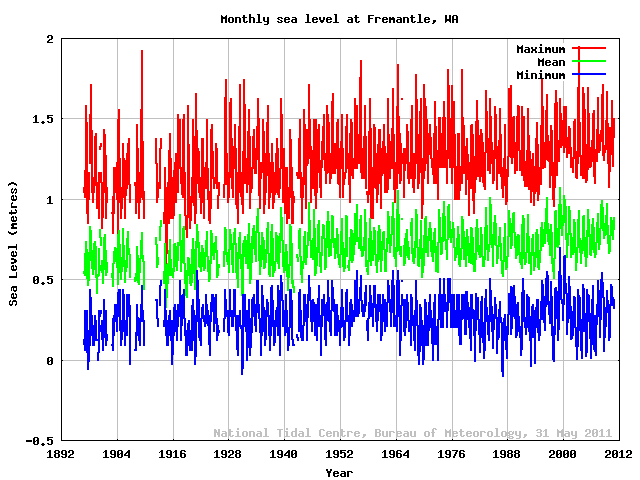 Fremantle has a very long history of sea level measurements, available at the Bureau of Meteorology website. The 1890s are on the left and 2011 is on the right. There's a good amount of variability throughout the month (the difference between the red and blue lines) but also there's a relatively steady trend. Some 2-5 year wiggles along this trend are due, among other things to El Nino. As sea level goes, this isn't a lot of variability compared to other places. Broome, for example, varies about 9 meters/27 feet between the monthly maximum and minimum tides. 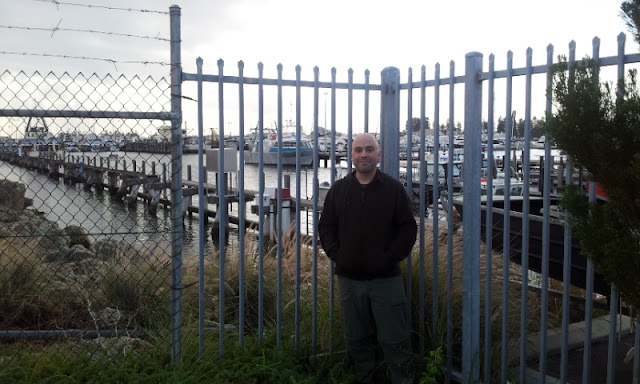 Kitty and I had a delightfully romantic time snapping photos at the edge of the government compound with the gauge in the background. I think it's going to be a long year of peering through chain link fences.

Oh, but it doesn't stop there! On our way back to Perth we took a late night stroll down to Swan River at Barrack Street Jetty, the streamgage at the very foot of the Perth central business district. The silver box likely contains some electronics, the gray tube has a float in it that measures river level, the gray pole to the right on it had an antenna (not shown). According to this interesting article about how flooding works in Perth, the city was under 2 meters of water for weeks in 1862. 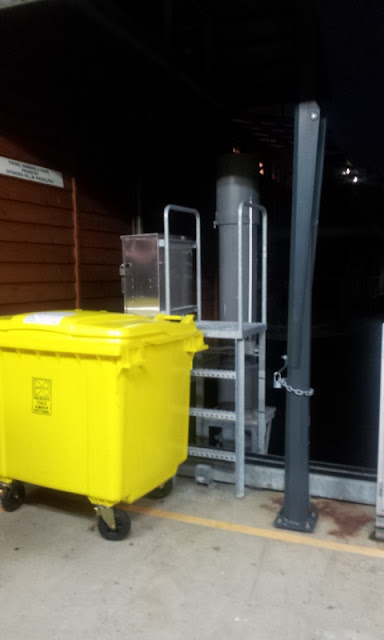 The yellow dumpster had trash from the nearby Annalakshmi restaurant, I believe?
Posted by Thomas Pagano at 11:53 AM
Email ThisBlogThis!Share to TwitterShare to FacebookShare to Pinterest