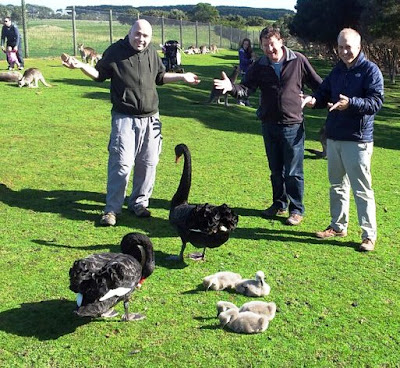 Earlier this week I had a chance to catch up with Andy Wood (right) and Martyn Clark (middle) while they were in Melbourne for a CSIRO/Bureau of Meteorology science conference. Andy was a driving force behind an advanced streamflow forecasting system for the Western US and is now a hydrologist at the Colorado Basin River Forecast Center. Martyn is a research scientist and a developer of one of New Zealand's river forecast systems. Andy and Martyn had never seen a koala so we took a day trip down to Phillip Island. I warned them that the koala is Australia's most boring marsupial but we'd probably get more entertainment from the kangaroos.
At the wildlife park we came across some black swans and their chicks. For a very long time people assumed that black swans didn't exist because historical records had only ever reported finding white swans. Much to everyone's surprise, black swans were eventually discovered by explorers in Western Australia (on the recently mentioned Swan river, funnily enough).


Now, the phrase "black swan" (popularized by a recent book) has come to mean a surprise with a major impact that seems obvious in retrospect. For example, housing prices could never go down because they've always gone up. I suppose smoking is safe because I've never met someone who got cancer. It's safe to build by the river because no one has ever seen a flood that high (at least in our lifetimes).

The discovery of a "black swan" is outside the realm of normal human experience, but once it happens, it's confronting. There's no more denying that is could happen, because it did happen. There's no un-ringing that bell.

In river forecasting, it sometimes seems like there's a limit to how wet things could get, the record highs cluster around a certain level. It can be like how new Olympic records can only shave a few tenths of a second off of previous times because things are already so fast. But when I started forecasting, southern Utah had a year that blew the doors off all the previous records... There was more snowpack than anyone could have imagined was possible. The question then was how much runoff there'd be? That's a story for another day, however.

In the end, we did get more fun out of the kangaroos. The park had bags of feed and the kangaroos would eat out of our hands. One mugged me and tore open the corner of my bag with his teeth. We thought this one had a face like one of Gary Larson's Far Side cartoons. 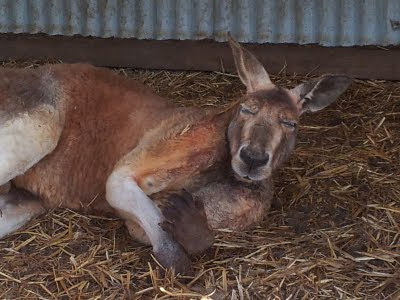 Posted by Thomas Pagano at 7:39 AM
Email ThisBlogThis!Share to TwitterShare to FacebookShare to Pinterest