The Ultimate Forecast (the End is Near) 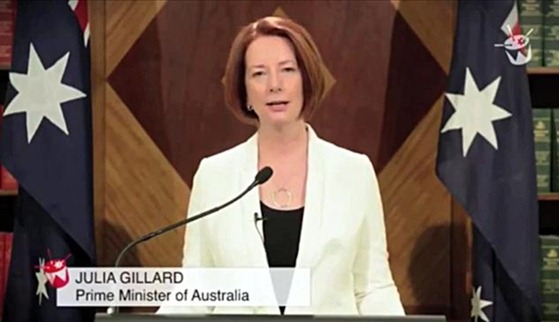 Late last week, Australian Prime Minister Julia Gillard spoke to her citizens, addressing their concerns about the impending end of the world on 21 December. Here is the transcript

"My dear remaining fellow Australians. The end of the world is coming. It wasn't Y-2K, it wasn't even the carbon price, it turns out that the Mayan calendar was true. While Australia's best and brightest at the [government research agency] CSIRO have not been able to confirm this, I'm confident in [local radio station] Triple J's prediction that the world is about to end. Whether the final blow comes from flesh-eating zombies, demonic hell-beasts, or from the total triumph of K-Pop [Korean pop music].

If you know one thing about me, it is this, I will always fight for you to the very end and at least this means I won't have to do Q&A again. Good luck to you all."

The predictions are based on the end of the Mayan calendar and have prompted NASA to put up a webpage reassuring people that there is no scientific evidence that the world is going to end. For example, from their Q & A section

On the topic that a rogue planet will strike the earth on 21 December, NASA tells us that such an Earth-killing body would have been seen by now on telescopes.

NASA is just one opinion of many. When faced with a thorny prediction problem (including recent presidential elections), people often turn to markets for guidance. According to news.com.au, some markets are stating that a Zombie Apocalypse is unlikely. Specifically

Sportsbet is running a 'novelty market' on the end of the world. While the spread of a new incurable killer virus is coming in at the shortest odds at 20-1 and being eaten alive by zombies is sitting on the longest odds at 1000-1, Sportsbet spokesman Shaun Anderson said zombies was actually the most popular bet.

The payoff on a doomsday bet is an interesting concept. Years ago I saw Al Gore give his traveling "Inconvenient Truth” lecture and at one point he made fun of a cartoon that showed a balance scale with on one side a stack of gold bars and on the other the earth. The idea was the balance and tradeoffs between conservation and economic growth. However, Gore's point was “it doesn’t matter how attractive the gold bars are, if you lose the earth you lose everything and the gold bars will be worth nothing.”

Therefore, if the Zombie Apocalypse could cause potentially infinite damage, even if the probability of it happening is extremely small, then it would always work out that the cost of protection would always be justified.

What do you think? Comment below while you still can!

Posted by Thomas Pagano at 2:45 AM
Email ThisBlogThis!Share to TwitterShare to FacebookShare to Pinterest