Back in the US of A

It has been a whirlwind last couple of weeks, visiting family in the US. We had some trepidation, not having been back home since moving to Australia three years ago. We first visited San Francisco, then Colorado, and Connecticut.
We had a lot of catching up to do so we dove right in with some junk food in Colorado...
And some guns... We drove by the famous Gunsmoke Gun shop in Wheat Ridge, Colorado.


We set off from Denver, west and south (through Fairplay, Buena Vista, Salida, Canon City, Pueblo and Colorado Springs... 425 km/265 miles in all) to visit family. Along the way we got to take in some hydrologic tourist hot-spots.
We stopped by the Roberts Tunnel, one of the many tunnels that brings water from the west side of the Rocky Mountains down to the east side.
After a minute of taking pictures, a police cruiser pulled up and the officer started asking questions. It's not a good idea to be taking pictures of important infrastructure like this, "after, you know, 9-11 and all." After listening to my story and reading my business card (which describes me as a "forecasting enthusiast"), he decided I was probably harmless enough and suggested I move along.

Later on that day Kitty's mother showed me the Hutchinson Homestead Ditch, just walking distance from where she lived.

The gate splits the river flow in two, left or right or both, depending on how the gates are cranked down.

We saw a few streamgages along the way, such as this snowbound stilling well near a frozen river (I believe it was the South Fork of the South Platte). 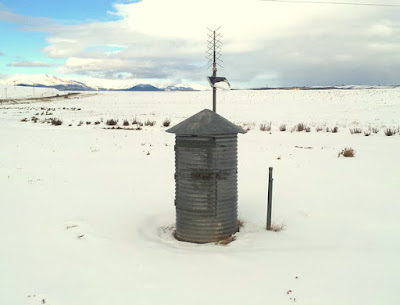 But the real delight for me was seeing the streamgage for Chalk Creek at Nathrop.

I had been a forecaster for this location for a number of years and had never been to it in person even though I had driven near it several times. The gauge has existed for over 60 years and is relatively free flowing. It drains 14,000+ foot (4,300 m) mountains, just a few miles away. The average slope, before the river hits the valley floor is about 20% (as mountains go, that's steep!)

We tarried much too long though and ended up driving our tiny rental car in white-out conditions on the highway clear past midnight. It was a feat considering that we hadn't seen snow in years and hadn't driven in months. We arrived safely and managed to have a White Christmas with parents, however.

Posted by Thomas Pagano at 3:22 PM
Email ThisBlogThis!Share to TwitterShare to FacebookShare to Pinterest